How Pharma Services Firms Are Meeting The Drug Industry’s Needs

by Ann M. Thayer ,
With reporting by Rick Mullin 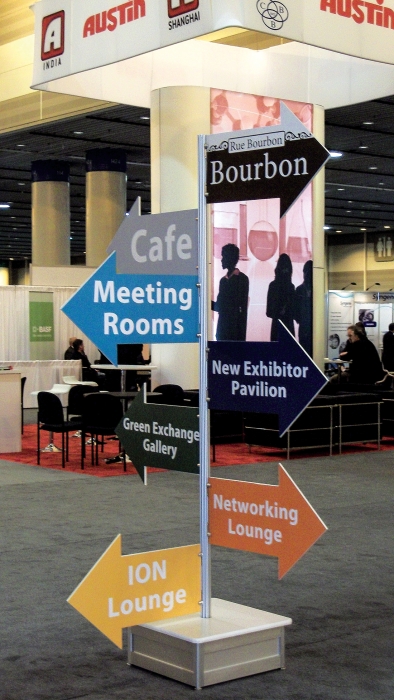 Credit: Ann Thayer/C&EN
InformEx attendees had many options within the trade show venue.

The way companies in both classes are approaching outsourcing is driving a need for broader, more integrated contract manufacturing and service offerings, according to Steve Barr, vice president for business development in Europe at Johnson Matthey Fine Chemicals. Suppliers are meeting that need by adding operations in the U.S. and Europe, which have become attractive locations for outsourcing providers.

These trends were evident at the annual InformEx trade show, held earlier this month in New Orleans. Away from the rising Mardi Gras din outside, suppliers were working hard to attract customers in relatively quiet convention center halls. On display were contract manufacturing businesses whose assets and expertise have been growing through acquisition and investment.

Johnson Matthey, for example, had just completed an expansion of catalyst and process R&D services and small-scale manufacturing in Cambridge, England, where it also acquired the solid-state chemistry firm Pharmorphix. A former GlaxoSmithKline facility in Annan, Scotland, that Johnson Matthey bought 15 months ago will soon add needed capacity to the company’s manufacturing network.

Since GSK last owned it, the 35-year-old Annan site has passed through several owners. The large plant doesn’t require major equipment alterations but does need operational and quality system upgrades. One section will open in the next couple of months, and the entire site should be on-line in the second half of the year, Barr said.

Having sold its Alfa Aesar lab chemicals unit to Thermo Fisher Scientific for about $400 million last year, Johnson Matthey has money to spend. The company sees fine chemicals as “an attractive area for further investment,” Barr said, and deals to expand are in discussion.

Among other contracts, Laurus supplies active pharmaceutical ingredients (APIs) for versions of Gilead Sciences’ hepatitis C drugs Sovaldi and Harvoni sold in developing countries. And it has a new pharmaceutical chemical supply agreement with a multinational drug firm.

As a result, Laurus will be adding API manufacturing capacity and final dosage formulation in India. It is also evaluating an expansion of its U.S. operations. “We started our 50-L reactor in Massachusetts last week, and we already have competition for it,” Needleman said.

Other suppliers expanding in the U.S. include France’s Novasep and Portugal’s Hovione. Novasep will add a kilogram-scale synthesis lab to its purification services facility near Philadelphia. With this addition, the site will offer comprehensive early-stage manufacturing for projects that can be transferred to France for later-stage development, said Andrew Brennan, general manager of Novasep’s U.S. operations.

Novasep is adapting its contract manufacturing services to the U.S. market, where flexibility and proximity to customers are required. “Our new management team, which came in two years ago, is very supportive of the fact that we need to be a lot more reactive to our customers,” Brennan said.

Meanwhile, Hovione is taking new steps after recently announced expansions in the U.S. and Portugal. According to Kristine K. Senft, vice president of marketing and sales, the company will roll its Hovione Pharmaceuticals division, which develops inhalable drug formulations, into Hovione. Senft cited synergies between inhalables and Hovione’s particle design services.

The firm also has developed a computational particle design program, which it now offers for spray drying. “We have put together mathematical models that will predict the outcome of particle distribution and accelerate scale-up without having to do trial and error repeatedly,” she said.

Peter Villax, who led Hovione’s pharmaceutical division, is now heading a new venture capital business that will invest in medical technology and health care software companies. It currently manages about $6 million in assets and hopes to double that figure this year.

Other suppliers are scouting for acquisitions, particularly in the U.S. Frédéric Gauchet, chief executive officer of France’s Minakem, said he’s keeping an eye out for an acquisition opportunity in the U.S. “It is better to acquire than to build,” he added, noting that the firm recently bought a high-potency manufacturing facility in Belgium.

And Mark Cassidy, president of API services at Piramal Healthcare, said the Indian firm is “on the acquisition trail,” hunting for high-potency capacity as well as general API manufacturing capacity. “We have an interesting late-stage pipeline, and we need capacity.” The company also may expand its facility in Digwal, India.

Northern Ireland’s Almac has adequate API manufacturing capacity after an expansion at Craigavon two years ago, said Denis Geffroy, vice president of business development. “But where we were hitting the wall,” he said, “was when we needed to scale up our biocatalysis processes.”

To solve help the problem, Almac acquired Arran Chemical, a chiral chemistry and biocatalysis firm in Athlone, Ireland, late last year. The added 45 m3 of capacity will “help us find a route to market for our large-scale chiral building blocks,” Geffroy said.

Adding capacity and capabilities has been Patheon’s ambition as well over the past year. While selling a few assets in Europe, the firm made several U.S. acquisitions and investments across both small molecules and biologics. “We can address 75–80% of the needs that you can encounter taking something from discovery to market,” pointed out Panos Kalaritis, vice president for strategic business development.

The concept of providing customers a one-stop shop, or OneSource as Patheon calls it, isn’t new. “A number of companies tried to do it in the past,” Kalaritis acknowledged, “but the strategy had flaws and as a result didn’t succeed.”

Some companies bought distressed assets for “pennies on the dollar” and “just put a coat of paint on them,” Kalaritis explained. But pulling together operations that by themselves aren’t doing well won’t make the sum total run well. Patheon, in contrast, is willing to pay the price to structure something with a greater chance of success, he said.

Timing also may have played a role in past failures, Kalaritis suggested. Given the ongoing changes in how pharma and biotech firms are approaching drug development and manufacturing, he said, “right now is a prime time for the industry.” 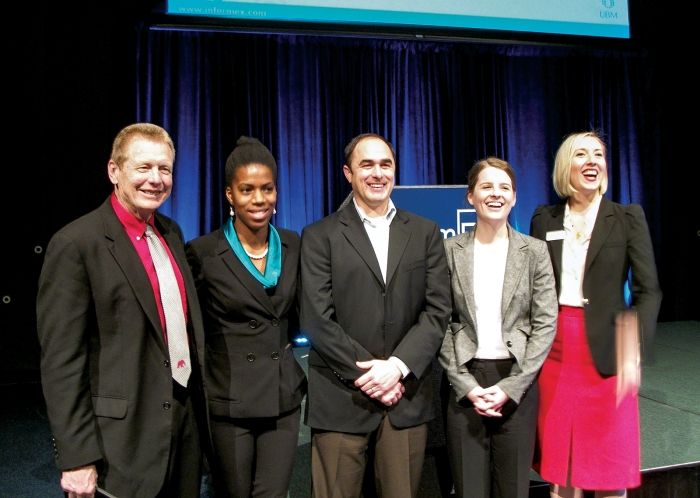 Despite their gee-whiz inventions, many start-ups fail because they don’t first validate their ideas with real customers. Engineering polymers for three-dimensional printing, nanotech drug delivery, impact-absorbing fluids, ionic liquids, heterogeneous catalysts, and novel lubricants were among technologies at the core of 11 start-ups looking to connect with customers at the InformEx trade show, held earlier this month in New Orleans.

Teams representing the start-ups were participating in a National Science Foundation Innovation Corps program focused on chemicals and materials. Those pitching their business plans were primarily students and faculty members from Georgia Institute of Technology, Tulane University, and the University of Alabama, all NSF I-Corps sites.

“We want them to be able to take their innovations from university labs or incubators into industry,” said Dan Daly, director of Alabama’s entrepreneur mentoring program.

The nearly five-year-old NSF I-Corps program tries to help start-ups avoid common pitfalls through hands-on learning about how business works. In two days of workshops and training, the teams at InformEx were coached and challenged by instructors from the schools’ incubator and entrepreneurship programs.

“I-Corps is tough. There is no place to hide, you’re up in front of us and it’s a tough gig, and you have probably never been questioned this way in your life,” Keith McGreggor, director of Georgia Tech’s VentureLab and an entrepreneur himself, told participants. “But I’m not sorry about asking the questions because I wish someone had done the same for me. I could have been saved millions of dollars.”

To get feedback from potential customers, suppliers, and partners, the 11 teams hit the evening reception on the first day and the show floor the next. After talking with up to three dozen contacts each, many teams made changes to their business plans.

Three start-ups came out on top in a three-minute pitch competition and presented their companies at InformEx’s closing session. First off, Georgia Tech chemistry graduate student Caroline Hansen explained how Fox Three Bioscience intends to develop microencapsulated drugs for the targeted release of hemostatic therapies, such as clotting factors for hemophilia.

OndaVia was recognized for developing a rapid microfluidics-based system for trace-level chemical analysis in water using Raman spectroscopy. Company head Mark Peterman, who has a Ph.D. in applied physics from Stanford University, helped found the firm in 2009. Supported largely by small business grants, OndaVia already is selling its transportable device and consumables to oil and gas industry customers.

The top spot went to Sanna Gaspard, who created Rubitection around her Ph.D. thesis in biomedical engineering, which she completed at Carnegie Mellon University with professor Todd Przybycien. Her five-year-old firm is developing a handheld reflectance spectroscopy device and software to detect, assess, and manage bedsores. The device works by estimating hemoglobin concentration, a measure of skin health.

Gaspard is no stranger to the entrepreneurial world. She has been recognized before in several business competitions and started an earlier medical device firm while a graduate student. But even she came away from the NSF I-Corps program with new ideas for expanding her business into prevention and treatment.

Outsourcing
Thermo Fisher will acquire a GSK plant in Ireland
Outsourcing
The good times keep rolling in pharmaceutical chemicals
Business
Growth strategies for pharmaceutical chemical makers on display at CPhI
Share X
To send an e-mail to multiple recipients, separate e-mail addresses with a comma, semicolon, or both.
Title: How Pharma Services Firms Are Meeting The Drug Industry’s Needs
Author: Ann M. Thayer
Chemical & Engineering News will not share your email address with any other person or company.