South Korea Is Catching Up In Electronic Materials 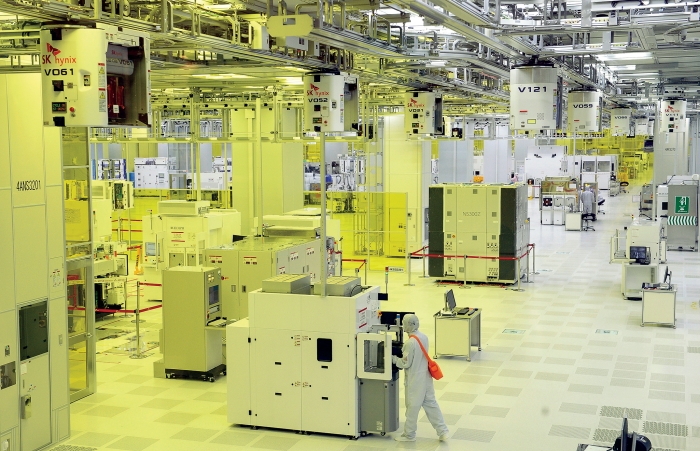 Every year, large South Korean business groups like Samsung and LG make tens of millions of mobile phones and television sets that they export all over the world. Korean firms also make many of the microchips that power those electronic devices as well as most of the plastic resins that house them.

One gap in this powerful supply chain is the expensive specialty gases and performance chemicals that are needed to fabricate semiconductor chips. Samsung, SK Hynix, and other Korean chip makers hand over tens, if not hundreds, of millions of dollars every year to chemical firms in the U.S., Japan, and Germany that supply those materials instead.

Given that South Korea has a well-developed basic chemicals industry and has mastered the technology for making the world’s most advanced chips, it is surprising that the country doesn’t feature a well-developed electronic materials sector.

But that is starting to change. In recent years, Korean chemical firms have been chipping away at the low end of the market with products such as high-purity nitrogen trifluoride for deposition chamber cleaning.

Taking advantage of their national ties to some of the world’s largest electronics producers, Korea’s emerging electronic materials suppliers are steadily expanding their product ranges and growing their sales. It appears to be but a question of time before these below-the-radar firms leap out of Korea and challenge better-known suppliers such as Dow Chemical and Merck KGaA.

“We are a big supplier of electronic materials because we supply Samsung and SK Hynix in Korea,” says Sangjeoung Kim, a senior manager of technology planning at Dongjin Semichem. The company does not sell a lot overseas, but business with its big local customers has already pushed Dongjin into the ranks of the major suppliers of electronic materials, according to Kim.

Sales figures back up his claim. Dong­jin recorded sales of approximately $650 mil­lion last year and expects to achieve $750 million in sales in 2016, Kim says. The company supplies materials used mostly during the photolithographic part of the chip fabrication process.

And in terms of the quality of the materials they supply, the Koreans are capable as well, according to Mark Thirsk, managing partner at Linx Consulting, which is focused on the electronic materials industry. Manufacturers thoroughly test any material used in producing chips to ensure that few of them will be rejected as defective. “A company like Samsung will not select a material from a Korean supplier just out of sentiment,” he says.

Customer support is important in the electronics industry, and Korean materials suppliers handle themselves well in that area too, in Korea at least. Major Korean chip manufacturers insist their material suppliers keep inventories in the country and do some development work there, Thirsk notes. In this regard, Korean firms have a natural edge over foreign competitors because almost all their operations are in the country.

Yongjun Choi, a sales manager at Youngchang Chemical, another supplier of photolithography materials, adds that his firm is particularly responsive because it is small and family-owned. “We don’t need to have meetings to respond to a customer’s request,” he says.

But Koreans are noticeably behind Western and Japanese competitors in developing the next generation of semiconductor materials. At Dongjin, Kim admits that the firm is weak in materials used for immersion lithography, an advanced exposure technique that enables argon fluoride lasers to draw circuit lines as thin as 32 nm.

Moreover, his firm does not have a range of photolithography products used in multiple patterning, a collection of techniques for doubling, tripling, or even quadrupling circuit density by overlaying one lithographic pattern on another. The advanced materials used in multiple patterning typically provide their suppliers with higher profit margins than do older generations of materials.

“Korean manufacturers battle for the crumbs of the market,” charges the manager of electronic materials at a big European company. “They’re achieving high growth rates at the lower end of the market.” He requested anonymity because his comments had not been cleared by his firm. To develop new, sophisticated chips, market leaders such as Samsung and SK Hynix “need to work with leading-edge market suppliers,” this manager claims.

Thirsk, the consultant, thinks that such a perception underestimates the capabilities of Korean firms in the areas where they do compete. Standard photoresists developed and made by Dongjin in Korea compete effectively against materials made by Dongwoo Fine-Chem, a Korean subsidiary of Japan’s Sumitomo Chemical, he asserts. “Dongwoo offers some of the best Japanese photoresists, so Dongjin is doing quite well there,” he says.

Dongjin is a fast follower that is catching up faster than it used to, Kim says. The increasingly complex challenge of developing the next generation of semiconductors is a source of opportunity for a firm like his, he notes. “We used to lag far behind market leaders like Shin-Etsu Chemical or Dow Chemical,” Kim says. “But as development times for new chips are taking longer, the gap is getting narrower.”

Indeed, electronic materials suppliers in Korea appear to spare no effort in product development. Youngchang Chemical’s Choi says one-third of his company’s employees work in R&D. It’s a similar story at ENF Technology, a supplier of ancillary materials such as photoresist thinners, strippers, etchants, and developers. About one-fifth of the company’s workforce of 300 is in R&D, according to D. K. Lee, vice president of marketing and sales.

ENF has developed technology for recycling its customers’ used thinners, Lee notes. Recycling volumes are particularly high in the liquid-crystal-display industry, a competitive sector where the lower cost of recycled thinner has appeal, Lee says. ENF provides the service in Korea and in China, where it has established facilities at the behest of customers such as Samsung.

Linx Consulting’s Thirsk says Korean electronic materials companies have so far only built labs and plants abroad to supply Korean semiconductor manufacturers that set up in those countries. This is surprising, he says, because Korean quality meets global standards, and expanding abroad would help companies build business with non-Korean chip makers.

Likewise, Korean firms have not been active acquirers of foreign electronic materials firms. One precedent was the 2014 acquisition by Korea’s Wonik Materials of a 50% stake in Nova-Kem, a Milwaukee-based producer of hexachlorodisilane and other precursors used in thin-film deposition. It was a modest deal, but Thirsk expects others will follow.

Korean electronic materials makers that want to grow have few options but to expand quickly in foreign markets, Thirsk argues. Those that fail to become better established internationally may find themselves competing more and more against up-and-coming Chinese firms at the lower end of the market. “If Koreans wait too long, they’ll lose the window to China,” he says.

A likely candidate for a big move would be SK Holdings, Thirsk figures. In November, SK bought OCI Materials, which is the world’s largest producer of nitrogen trifluoride and is also developing thin-film precursors.

“SK is a big company that has made big investments in the past,” Thirsk says. Within two years at most, he expects, Western and Japanese materials suppliers will come up against Korean competitors in markets they once considered their own.