Science research not likely to see the full 4% increase found in the White House’s proposed 2017 budget, and some agencies set to lose 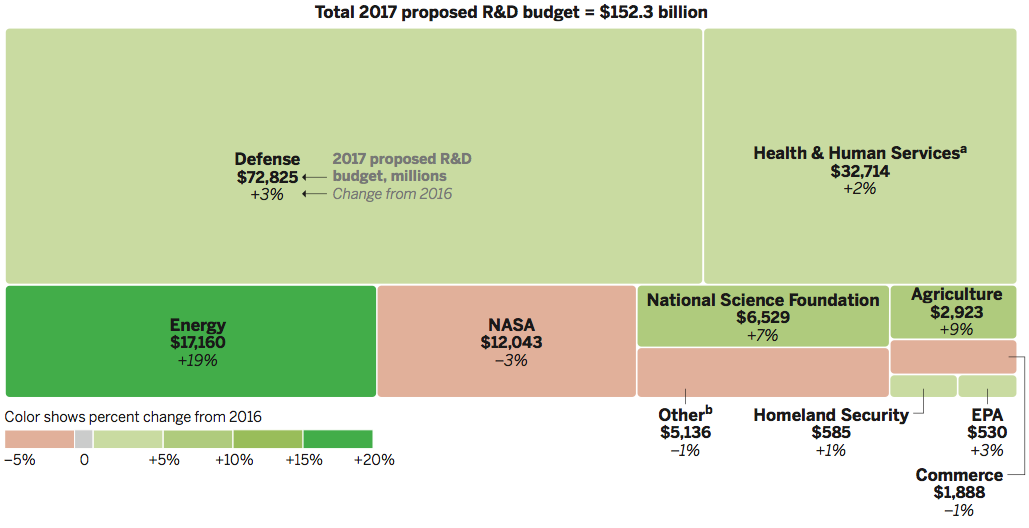 Credit: White House Office of Management & Budget
The Obama administration proposed an overall 4% increase in total R&D spending for the federal government in 2017. Because the request skirts budget caps agreed to last year, Congress is unlikely to provide this much money. NOTE: Budget for R&D activities only. a Includes the National Institutes of Health. b Includes the Smithsonian Institution and the Departments of Education, Interior, Transportation, and Veterans Affairs.

On first glance, President Barack Obama’s proposed fiscal 2017 budget looks good for science, with an overall increase of 4% over 2016 to $152 billion in federal research and development spending.

But his Administration accomplishes much of that increase using a rarely seen maneuver to avoid budget caps, something Congress is almost sure to strike down. That has disappointed many in the science community, who were hoping for higher science budgets without the Administration resorting to accounting tricks.

Last October, Obama agreed to a deal that raised congressionally negotiated budget caps and resulted in overall higher science spending. The new proposal attempts to exceed those caps by adding money outside of the normal budget process.

Almost all federal research is funded with discretionary spending, which gives Congress power over year-to-year funding decisions through the regular appropriations process. In the 2017 budget, the Obama Administration proposed increasing spending using mandatory funds that more commonly support long-term commitments such as Medicare and Social Security.

“The budget sets aspirational goals for research funding, which we commend. But other than energy research, the proposed investments rely on mandatory funding streams that Congress will not seriously consider,” says Hunter Rawlings, president of the Association of American Universities, which represents the nation’s largest research universities.

Despite the proposed increases, several agencies were hit surprisingly hard in Obama’s proposal. For example, the National Institutes of Health received strong support from Congress with an increase of more than 6% in 2016. But the agency would get just a 3% increase—including mandatory spending—in the President’s 2017 budget. And basic sciences at the Department of Defense would be hit even harder, declining by 9%.

The Department of Energy Office of Science fared best among the major funders of chemistry research, with an almost 7% increase, including mandatory spending driven largely by the President’s clean energy push. The National Science Foundation would get a 6% boost. The National Institute of Standards & Technology would see a 15% increase to $1 billion when mandatory funds are included. In addition, the President asked for $1.9 billion in mandatory support to fully fund the National Network for Manufacturing Innovation, a group of manufacturing research sites that is overseen by NIST. The Department of Agriculture’s extramural research program—the Agriculture & Food Research Initiative—would see its budget double from $350 million to $700 million, including $325 million in mandatory funding.—Andrea Widener 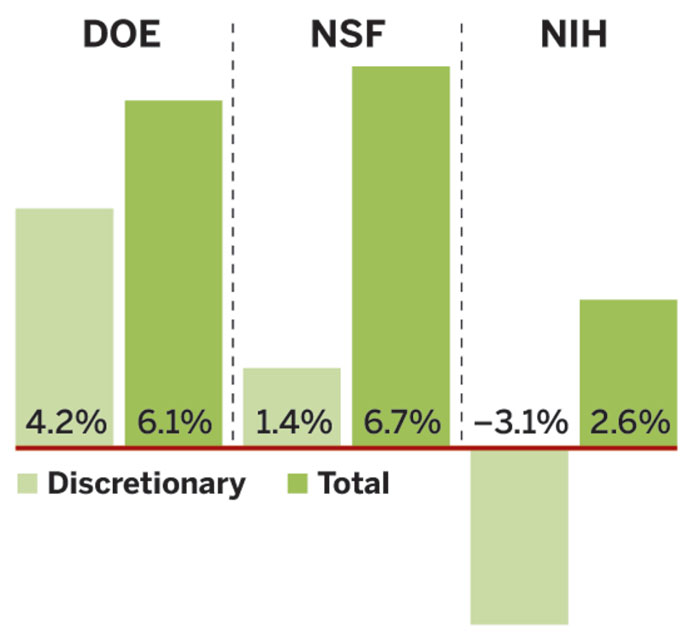 Under the President’s proposed budget, the Energy Department’s Office of Science would receive $5.7 billion in fiscal 2017, an increase of 6.1% over the enacted 2016 budget. The increase includes $100 million in mandatory funding that would allow DOE to support university research, says Cherry A. Murray, director of the Office of Science.

The Office of Science is the largest funder of basic research in physics, chemistry, materials science, and geoscience, among others, and provides user facilities to researchers free of charge, Murray says. Her agency lays partial claim to three of the four recent additions to the periodic table, temporarily named ununpentium, ununseptium, and ununoctium.

The mandatory funding for the Office of Science, which bypasses the annual congressional appropriations process and therefore may raise ire among lawmakers, would be invested in computational partnerships that drive innovation in energy technology in areas such as carbon dioxide emissions reduction, catalysis, or biofuels, Murray says. Her agency would also look to support studies of the chemistry of materials under harsh environments, including ones that are corrosive or subject to high radiation, and bioengineering of plants and microbes for clean energy applications.

The President’s budget request for the Office of Science also includes $1.9 billion for basic energy sciences, an increase of $88 million above 2016. The increase would include support for five new Energy Frontier Research Centers, partnerships forged among industry, university, and national laboratories to solve grand energy challenges. The increase would bring the number of these centers to 37.—Jessica Morrison

The fiscal 2016 budget might have been disappointing for the National Science Foundation. Many other agencies got larger boosts that year, and NSF got just a 2% increase.

That isn’t the case in the Obama Administration’s proposed 2017 budget. The federal basic research funding agency would get a 6.4% increase over 2016 to almost $8 billion. However, that increase includes $400 million in spending above a budget cap, which Congress is unlikely to support. When that $400 million is excluded, the President’s proposed funding is up just 1.3% to $7.6 billion.

With the $400 million, “the overall emphasis is on strengthening core programs and our ability to support younger investigators,” explains NSF Director France Córdova.

In NSF’s Mathematical & Physical Sciences directorate (MPS), the mandatory money—$81 million of $1.4 billion proposed—would also go toward supporting early-career scientists and making their grants a little larger, says F. Fleming Crim, the head of MPS, which includes chemistry and materials science. “It is a way to effectively use this funding without distorting the program or committing ourselves to a lot of long-term things that would be at risk if that funding were to go away.”

Without that money, the 2017 proposed MPS budget is essentially flat from 2016, up just 0.4%. The small increases would go to presidential priority programs such as clean energy and the intersection of food, energy, and water.

Grant funding in MPS would also remain flat unless Congress adopts the additional spending, which would support approximately 200 extra grants in 2017 for a total of 2,300.

The Chemistry Division would get a proposed $247 million in discretionary funding and $15 million in mandatory support in 2017, up 6.4% from $235 million in 2016. It plans to put much of its increase into research centers. For example, the Centers for Chemical Innovation will hold a new competition in 2017 to support nine new Phase II awards and three Phase I awards.—Andrea Widener

President Obama’s fiscal 2017 budget proposal for the National Institutes of Health includes a $1 billion cut to the agency’s regular appropriations, but it also includes an extra $1.8 billion in the form of a onetime mandatory-spending increase unlikely to find support in Congress.

The biomedical community is disappointed and confused by the proposal, calling it a complicated maneuver that fails to support critical research grants.

Overall, NIH would receive $33.1 billion, an increase of $825 million or 2.6% compared with 2016. Of that increase, $680 million would go to support a multiyear effort that aims to wipe out cancer, $100 million would support a Precision Medicine Initiative to gather data on environmental exposures, physical parameters, and genetic information from a million or more individuals, and $45 million would fund an effort to better understand the brain.

But even if Congress agrees to the mandatory funding increase, budgets for all of NIH’s 27 institutes and centers, except the National Cancer Institute, would remain flat. In addition, the number of competing research grants would drop to 9,946—a decrease of 807 or 7.5% compared with 2016. NIH predicts that in 2017, the availability of fewer grants would decrease success rates, or the percentage of grant applications that receive funding, from 19.2% to 17.5%.

“The lack of a realistic funding proposal threatens the U.S. position as the global leader in biomedical research innovation,” says Benjamin Corb, director of public affairs at the American Society for Biochemistry & Molecular Biology. The proposed 2017 budget for NIH “doesn’t provide our nation’s researchers with the support they deserve.”

NIH Director Francis S. Collins defends the budget proposal, saying the agency has to look for other funding sources because of the spending caps agreed to last year by Congress and the Obama Administration. He points to legislation passed last year by the House of Representatives that would give NIH money from similar mandatory funds to speed up the development of new drugs and diagnostics.—Britt Erickson