[+]Enlarge
Credit: Courtesy of Robert Krickl
Modeling with the model: Krickl with his crystal creation. 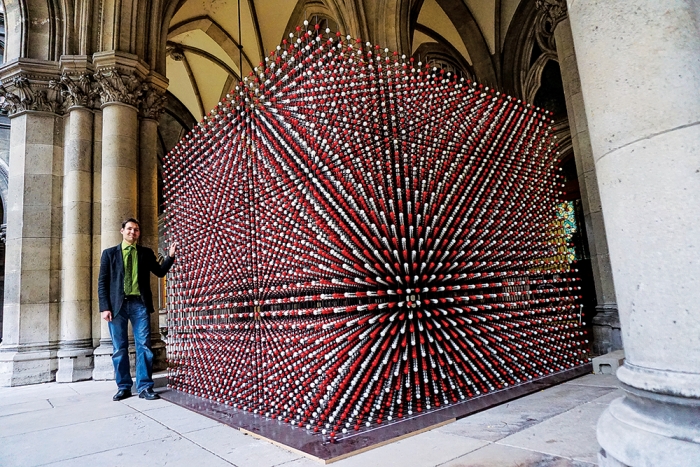 Credit: Courtesy of Robert Krickl
Modeling with the model: Krickl with his crystal creation.

Ever wanted to Explore a crystal structure? Well, here’s your chance. 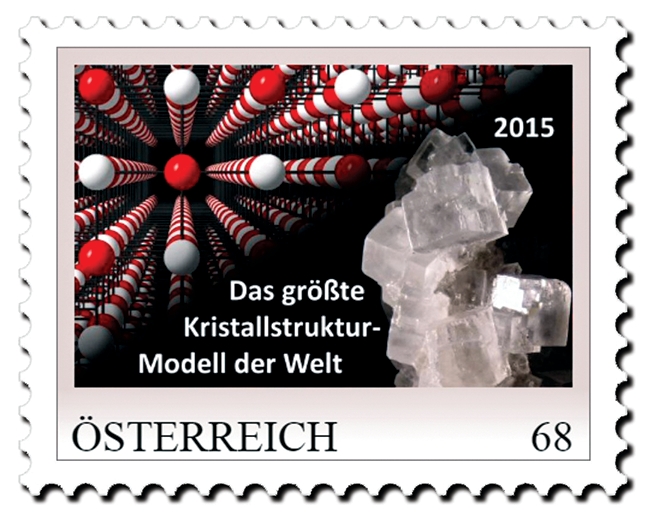 Robert Krickl, a crystallographer-turned-science-communicator living in Austria, has built the world’s largest crystal structure model, made from custom-designed balls and sticks—38,880 balls and more than 10 km of connecting sticks, to be exact. It sits in the courtyard of the city hall of Vienna until Feb. 25, and then it will be available for other educational exhibits.

Towering over people, the model measures more than 3 meters on each side of the cube. “With each step you take, you see a different pattern because of this periodic arrangement of balls,” he says.

Krickl says it took him more than a year to build and assemble the model. “I had to use over 400 tubes of glue,” he says. “My flat was entirely filled from bottom to top with this model, and there was a spot about 1 m2 where I slept, but the rest, even the bathroom, was filled with atoms.”

Krickl, who has a Ph.D. in crystallography and mineralogy, says he built the model to commemorate several milestones, including the 100th anniversary of the British father-and-son team of William Henry Bragg and William Lawrence Bragg winning the 1915 Nobel Prize in Physics for originating the technique known as X-ray crystallography.

Krickl has been quick to secure his bragging rights, even registering with Guinness World Records. “I can tell you that it is the largest crystal structure model in the world,” he says. “The last record was 300 balls, and it is now 38,880 balls. It’s for sure.” The model has even been commemorated on an Austrian postage stamp.

He plans to continue expanding the crystal and hopes to reach 42,875 balls. He invites science enthusiasts to sponsor an atom. “You can eternalize yourself in this monument of science,” he says.

Playing Battleship, the game where you aim to sink your opponent’s ships by guessing where they are on a grid, has gained a new element of creativity. Karyn Tripp, a homeschool mom of four kids, created a Battleship-style game using the periodic table of elements. Players call out different element names to guess where on the table the opponent has placed his or her ships.

[+]Enlarge
Credit: Courtesy of Karyn Tripp
You just sank my boron: Move over Battleship, there’s a new game in town. 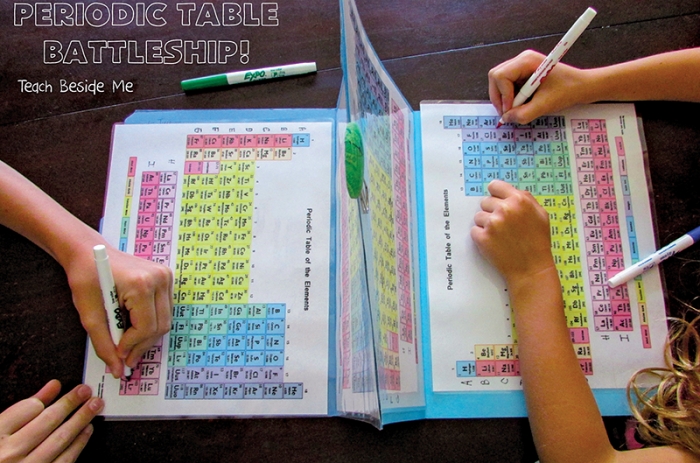 Credit: Courtesy of Karyn Tripp
You just sank my boron: Move over Battleship, there’s a new game in town.

“My oldest son, he’s 11 now, and he’s always been very science-minded and loves everything related to science. Because of that, I was looking for creative ways to teach it and to make it interesting,” she says.

“I’ve always been fascinated by science, but it hasn’t always been my strongest subject,” Tripp admits. “That’s why I’ve done a lot with my kids to make it more interesting so they don’t dread it. I want them to really enjoy it and have that love of learning.”

The game can be made easily at home. You’ll need four laminated copies of the periodic table (be sure you use an updated one with the four new elements), two file folders, and a jumbo paper clip. Attach the periodic tables to the inside of the two file folders, and then clip the two folders together at the top with the jumbo paper clip. Or you can purchase a handmade set for $15 from Tripp’s Etsy shop, Teach Beside Me.

Science Communication
Book covers and Disney characters—there’s a periodic table for everything
Periodic Table
A periodic table of signal flags
Periodic Table
2019: The year the periodic table gets its due
Share X
To send an e-mail to multiple recipients, separate e-mail addresses with a comma, semicolon, or both.
Title: World’s Largest Salt Cube, Periodic Table Battleship
Author: Linda Wang
Chemical & Engineering News will not share your email address with any other person or company.

Comments
Jyllian (February 22, 2016 11:20 AM)
IUPAC has a periodic table with elements through 118 here: http://www.iupac.org/fileadmin/user_upload/news/IUPAC_Periodic_Table-8Jan16.pdf
Reply »