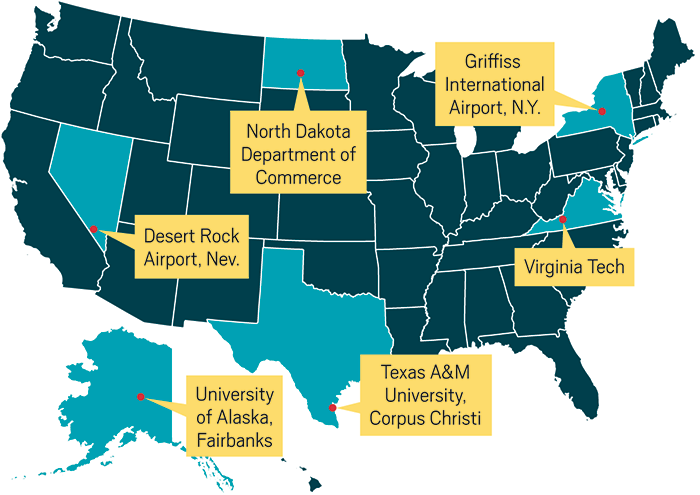 At the six FAA drone test sites, researchers can do proof-of-principle experiments without jumping through so many regulatory hoops.

Scientists hoping to use drones in airborne research legally in the U.S. face complex regulatory hurdles. Most scientists C&EN interviewed described the regulatory process with exactly the same word: onerous.

“But the bottom line is regulations are regulations,” says Virginia Tech’s David G. Schmale III. “You have to obey them.”

In fact, if scientists want to get funding for drone research or be able to publish drone research, they’d be wise to follow the rules, which, in the U.S., are set by the Federal Aviation Administration (FAA). An increasing number of journals won’t publish studies carried out with drones if the scientists can’t prove the work was done legally, Schmale explains. The same applies to funding applications. “You’d be surprised how many grant proposals I’ve seen where the researchers don’t have the legal means to do the experiments,” he adds.

In the U.S., the moment drones are used for a commercial activity—including taking photos that get published by media outlets—rather than as a hobby, the flyer must apply for a Section 333 exemption. Meanwhile, scientists flying drones for research purposes, including for a proof-of-principle experiment, need to apply to FAA for a so-called Certificate of Waiver or Authorization.

Called COA for short, this 20-plus-page online application is anything but petite. Although FAA aspires to respond to these applications within 60 days, researchers report that it can take six or seven months to hear back from the agency.

In addition to obtaining a COA, any team wishing to do drone experiments must also include a pilot in command who has completed written pilot tests and an observer who has their eye on the sky around the drone at all times. Researchers doing experiments must typically obey the same rules as hobbyists: use a drone that’s no heavier than 25 kg, stay below 121 meters, keep the drone in a line of sight, and fly no closer than 8 km to an airport.

But don’t let the tough approval process get you down. One way to see whether your research could benefit from drone flights without jumping through all the regulatory hoops is to collaborate with researchers at one of six FAA test sites located in the U.S. These facilities have blanket COA approval.

You’d be surprised how many grant proposals I’ve seen where the researchers don’t have the legal means to do the experiments.

Scientists who don’t want to be restricted by governmental regulations often try to fly drones in military airspace: This is one of the few places where researchers can do experiments at night, in clouds, or beyond a line of sight—conditions that may interest scientists but are prohibited by federal regulators because of safety concerns.

Other researchers have opted to travel to countries without regulations to do their drone experiments, but this can be expensive and risky. One scientist told C&EN that after he paid for a trip to Spain, the country elected a new government, which promptly established stricter regulations that made it impossible for the researcher’s drones to fly legally.

Worldwide Rules: Click on a country to find out its drone regulations.

Around the world, drone regulations—if they exist—typically limit aircraft speed, distance, and altitude. But the details differ. In Germany, for example, approval to fly is decided by state regulators, so if you have permission to fly in Bavaria, you may not get approval to do so in the countryside near Berlin. (And most regulations prohibit flying over cities or groups of people.)

Wherever scientists fly, they should know the rules and take extra safety precautions, even if the local regulations are lax, says Rick Thomas, a University of Birmingham researcher who gives drone management training to scientists. “If scientists give themselves a bad reputation, then legislators might make it more difficult for us to fly. It’s already difficult as it is.”

Ethics
US federal scientific integrity policies need improvement, report says
Policy
U.S. visa change could impact chemists
Environment
California Limits Use Of Pesticide Chloropicrin As A Soil Fumigant
Share X
To send an e-mail to multiple recipients, separate e-mail addresses with a comma, semicolon, or both.
Title: Drone-curious? Here’s how to fly science missions legally
Author: Sarah Everts and Matt Davenport
Chemical & Engineering News will not share your email address with any other person or company.