Chemical firms survey their plants from the sky 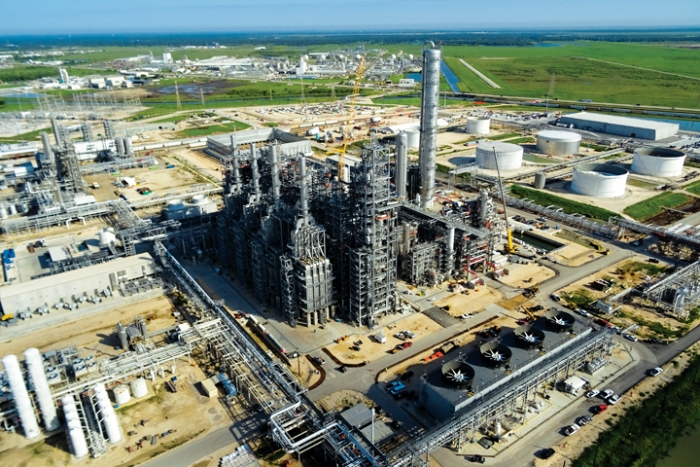 Before Dow Chemical got federal approval in 2015 to fly drones through its chemical plants, the company had to hire a helicopter, set up telescopes, or spend days erecting scaffolding to check on potential problems in hard-to-reach places.

“Now within hours we can get high-resolution photos and videos,” says John Flanagan, director of corporate aviation at Dow. “When we get that image, we can zoom in and really make assessments on nuts, bolts, wiring, tie-offs—you name it. It’s like having a human eye a couple of feet away, when really we’re standing off by 100 feet.”

The company has also been flying the drones inside enormous 12-meter-high chemical storage tanks to check for cracks or seal problems. Unlike most aerial photos taken with drones, “the images inside a tank are actually very boring and very dark,” he says. But this is a good thing because any unusual textures in a dark, monochromatic image could be signs of a crack, he says.

After Dow got Federal Aviation Administration approval to fly its small unmanned aerial vehicles, it quickly put three drones to work at plants in Texas and Louisiana—although the firm had already been using the devices for airborne inspections at several sites abroad for the past several years. The company is currently putting only cameras on board the drones, but there are “hot and heavy discussions” about sending other kinds of analytical equipment up to monitor the chemical plants, Flanagan says, for example, to sniff out gas leaks.

“When this technology came along, we really saw the opportunity to take some human risk out of some tasks and chores that have to be accomplished from a regulatory or operational” standpoint, Flanagan says. “The cost savings—and it is hard to put a dollar value on it yet—are in the information coming to the decision-makers to make real-time decisions.”

As one of the first—if not the first—chemical companies to use drones in this way, Flanagan says Dow has been fielding phone calls from others in the chemical industry who are curious about getting in on the game. 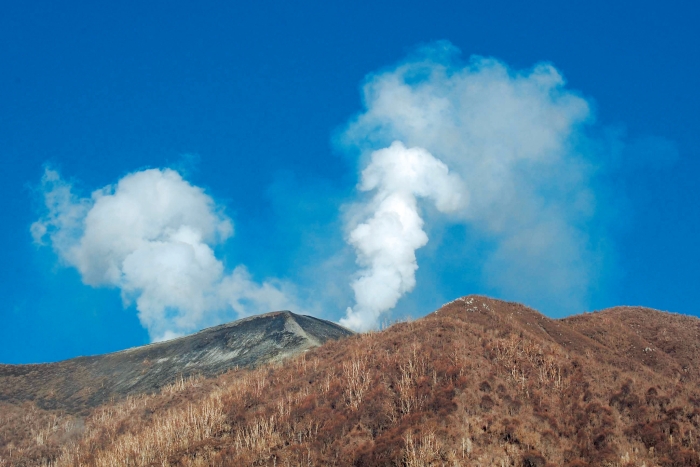 Credit: Geoff Bland
Researchers have been flying drones through the plumes of Costa Rica’s Turrialba Volcano.

Erupting volcanoes are not exactly the most compliant experimental subjects. Volcanologists often have to study them from afar, using satellite imaging technology to follow the trajectory of ash and sulfur dioxide being spewed into the atmosphere.

Sometimes they even embark on risky missions to collect samples, approaching belching craters on foot or using piloted aircraft. Despite these courageous endeavors, researchers have a patchy understanding about the chemical composition and atmospheric trajectory of poisonous plumes, says David Pieri, a volcanologist at the National Aeronautics & Space Administration.

What we really want to do is fly a mass spectrometer through a plume.

That’s why Pieri hooked up with his NASA colleagues Geoff Bland and Matt Fladeland, as well as Jorge Andres Diaz at the University of Costa Rica, to take the first chemical measurements over active volcanoes with drones.

Although unmanned aerial vehicles (UAVs) have been used heavily to take impressive video high above erupting volcanoes, this team is the first to systematically penetrate plumes with a variety of gas and environmental sensors.

Over the past two-and-a-half years, they’ve been flying a squad of U.S. military hand-me-down Dragon Eye drones and other UAVs through the plumes of Costa Rica’s Turrialba Volcano.

Turrialba’s steady but diffuse belching of poisonous gas has given the researchers a chance to refine their data acquisition techniques at a relatively mellow volcano. “Ultimately we want to fly into larger eruptions,” Bland says. “If we transect some more violent eruptions, we could look at plume gradients, velocity, temperature, chemistry—and then map where those emissions go.” Mapping those emissions is not just of academic interest—it’s essential for post-eruption air safety.

Scientists haven’t yet reached a consensus about what levels of volcanic ash are safe to fly in, Pieri says. This has led to some close calls with commercial planes, such as the KLM flight that passed through a volcanic ash plume near Alaska in 1989. The plane plunged more than 3.5 km before the pilot managed to restart its four ash-choked engines.

Uncertainty about safe levels of ash is also why air traffic over Europe was unilaterally stopped for days in 2010 after the eruption of Iceland’s Eyjafjallajökull volcano. The lockdown led to an estimated $5 billion in losses and prompted many in the airline industry to question whether regulators had overreacted, Pieri says.

Along with Bland, Fladeland, and Diaz, Pieri hopes to develop ways to determine when and where it is safe to fly after a volcanic eruption, by comparing satellite-based observations with precise drone measurements of ash and poisonous gases.

The work on Turrialba has also given the team a chance to study the volcano’s unique chemical fingerprint as it emerges from the crater, before the gases mix with nearby air. In a typical eruption, volcanoes spew large quantities of carbon dioxide, water vapor, and sulfur dioxide, Pieri says. But it’s the total suite of gases—including hydrogen sulfide, nitrous oxide, carbon monoxide, and carbonyl sulfide—that reveal characteristics of an individual volcano’s underlying magma geochemistry.

“What we really want to do is fly a mass spectrometer through a plume,” Pieri says, but at 20 kg in weight, even their miniature mass spectrometer is an order of magnitude too heavy for a Dragon Eye. So the team has now outfitted another military hand-me-down, a large Sensor Integrated Environmental Remote Research Aircraft (SIERRA) drone weighing 225 kg, so that it can accommodate the instrument.

Later this spring, the team will travel to Southern California’s Salton Sea Geothermal Field, a group of live mud volcanoes along the San Andreas Fault line. There, they’ll test the ability of their mass spectrometer to measure the gases being emitted.

Developing drone technology to study active earthbound volcanoes could eventually lay the groundwork for a mission to Venus, Bland says, a planet whose surface is composed almost entirely of volcanoes. 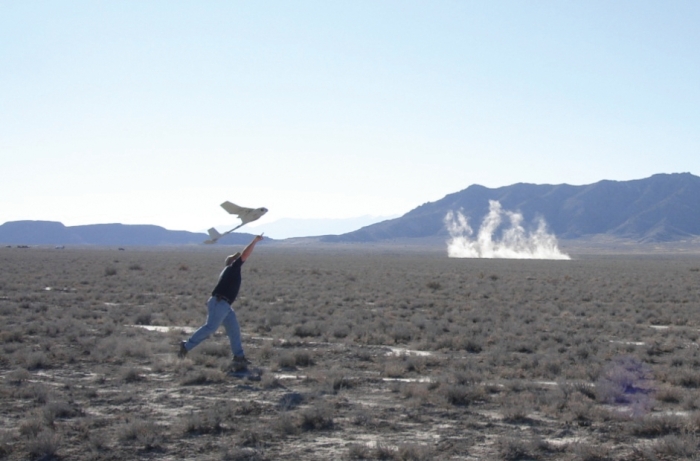 Credit: Department of Defense
Drones that can sense airborne hazards, such as chemical and biological weapons, take a test flight in Utah.

Although researchers have developed gas masks and antidotes to mitigate exposure to chemical weapons, it’s best to avoid contact with the toxic agents in the first place. Victims exposed to substances such as sarin or tabun experience headaches, vomiting, and convulsions, not to mention the fact that these nerve agents can rewire neural pathways and cause long-term changes to personality and behavior. Exposure to biological or radioactive threats isn’t any better.

Back in 1998, researchers at the U.S. Army’s Edgewood Chemical Biological Center were recruited by the Defense Threat Reduction Agency (DTRA) to figure out ways to put chemical weapon sensors on drones.

“Unmanned aerial vehicles are suited for dull, dirty, and dangerous missions,” says Britt K. Kelley, unmanned systems integration manager at DTRA. “Our focus is on anything that is a threat. We look holistically at chemical weapon threats as well as other biological and nuclear threats. Our goal is to keep our people out of harm’s way the best we can.” If the military could use drones to detect chemical weapons before an attack, it would limit troops’ exposure.

One of the biggest challenges to developing monitoring systems for drones is that most sensors “are designed to be stationary or hand-carried,” Kelley says. “So when you take it and put it at 40, 60, or 100 miles an hour, it’s a whole different problem set.”

Another challenge is integrating sensor software with drone navigation electronics, so that when a suspicious compound is detected, the drone can be maneuvered into a cloud for optimal detection and collection, says Vince McHugh, a research chemist at Edgewood.

To start with, the Edgewood team has outfitted drones with ion-mobility spectrometers for real-time detection of chemical weapons. According to Kelley, the drones are also equipped with sample collectors that store substances for later forensic analysis and are part of a system of checks and balances.

Environment
Looking for methane leaks
Environment
What’s on the horizon for drones doing science?
Business
Battelle Debuts Air Monitor
Share X
To send an e-mail to multiple recipients, separate e-mail addresses with a comma, semicolon, or both.
Title: Drones detect threats such as chemical weapons, volcanic eruptions
Author: Sarah Everts and Matt Davenport
Chemical & Engineering News will not share your email address with any other person or company.