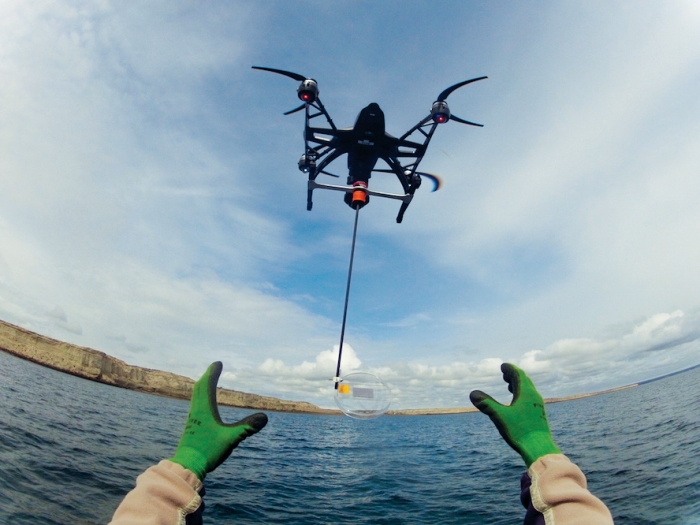 Credit: Ocean Alliance
A SnotBot returns to researchers with its whale-blow booty.

Call him Iain Kerr. Some years ago, he met Roger S. Payne, a biologist best known for hunting whales with his ears, rather than harpoons. Prior to about 1970, nearly everything known about whales came from studying their corpses, Kerr says. His meeting with Payne, who helped discover the songs humpback whales use to communicate, left him enamored with the idea that researchers need not kill the leviathans to learn about them.

Kerr is now the chief executive officer of the conservation group founded by Payne, Ocean Alliance, and is working to push whale research to its noninvasive limits with the help of flying robots—flying robots called SnotBots that catch what amounts to whale boogers.

Within the pages of “Moby-Dick,” Herman Melville speculated that the oily mist spewed from blowholes contained intimate whale secrets. Researchers agree. The pungent spray is a treasure trove of genes, microbes, and hormones, with that last category among the most promising chemical indicators of whale health.

When a whale surfaces to breathe, a SnotBot launches from an Ocean Alliance boat to the whale, waits for the whale to exhale, catches the blow in a petri dish, and returns with the goods, Kerr says. Researchers then transfer the snot to vials, which are stored in liquid nitrogen. The team has optimized the catching of snot, but it needs to overcome some challenges before conclusive analysis begins.

Rosalind M. (Roz) Rolland, a senior scientist in marine conservation medicine at the New England Aquarium, knows all about these challenges. She’s not involved with the SnotBot project, but her team has used immunoassays to measure hormones in whale blow such as corticosterone, progesterone, and testosterone, which are tied to stress, pregnancy, and sexual maturity, respectively.

“We know we can measure all of them. It’s the quantification that’s difficult,” she says. Beyond biochemical signatures, each whale blow sample also contains an indeterminate amount of seawater, Rolland explains.

So even though the researchers can measure small amounts of the hormones, it’s difficult to determine the compounds’ concentrations inside the whale and how they correlate to the animal’s health. “Dilution is a problem,” Rolland says.

That’s perhaps the largest obstacle facing Kerr and his team, but Rolland is still excited by the prospect of SnotBots. “There’s a lot of new technology that can be brought to bear on this field,” she says. “That certainly includes drones.”

Kerr, too, is optimistic that drones could enable a new, noninvasive research paradigm—an optimism bolstered by a recent SnotBot expedition in Patagonia. “What’s really exciting is that these animals do not seem to care about the drone,” he tells C&EN. “This all started with Roger Payne saying we don’t have to kill whales to study them. Now, they probably don’t even know that we’re studying them.”

Whales aren't the only animals getting help from drones

Persistent Pollutants
Hundreds of pollutants found in polar bears’ blood
Analytical Chemistry
Peeking At A Cell’s Small Molecules
Education
Fossil-Infused Beer, 75 Million-Year-Old Turtle Bones
Share X
To send an e-mail to multiple recipients, separate e-mail addresses with a comma, semicolon, or both.
Title: Snatching whale snot from the sky and other adventures in wildlife conservation
Author: Sarah Everts and Matt Davenport
Chemical & Engineering News will not share your email address with any other person or company.