[+]Enlarge
Credit: Diemut Strebe
Did you hear that? “Sugababe” delves into philosophical questions of identity. 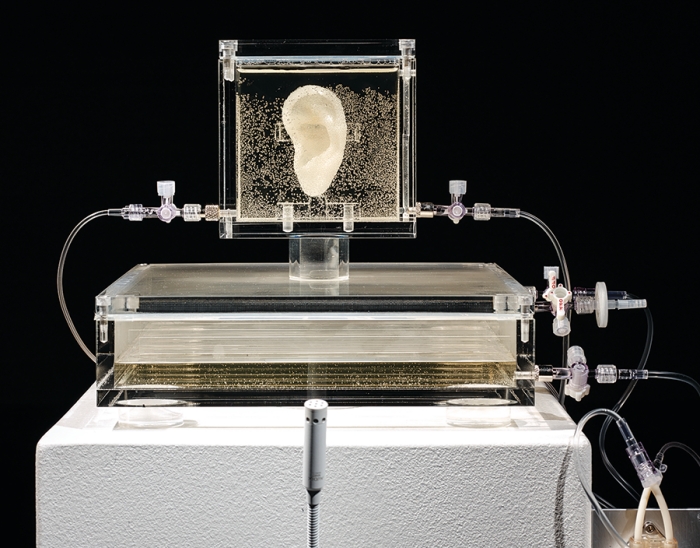 Credit: Diemut Strebe
Did you hear that? “Sugababe” delves into philosophical questions of identity.

Here’s a question that’s had philosophers scratching their heads for nearly 2,000 years: If you restore a ship by replacing all of its parts, is it still the same ship? First posed by the Greek historian Plutarch, the conundrum also struck a chord with artist Diemut Strebe. With the tools science now offers for growing tissue and manipulating genetic material, Strebe wondered whether she could build a replacement for what’s arguably the art world’s most famous biological specimen—Vincent van Gogh’s left ear.

The result is a sculpture of a left ear made of cells containing genetic material from van Gogh. The ear is housed in a clear container filled with a nutrient solution and is connected to a computer that processes sound so that it can ostensibly hear. Strebe named the work “Sugababe” after the English pop group that replaced all of its original members. 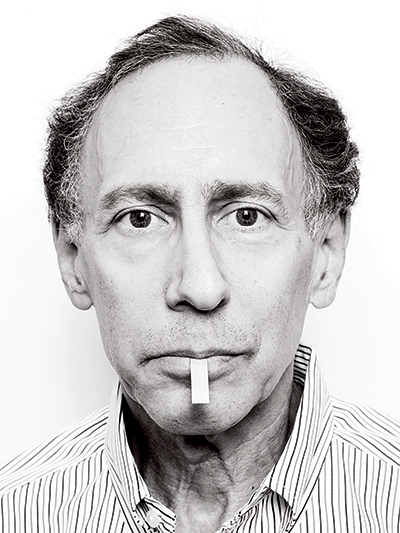 Strebe modeled the ear’s shape from a photograph of van Gogh. She spliced copies of DNA taken from the stamp and envelope flap of a letter he sent in 1883 into the cells she used to create the ear sculpture. She also used cartilage cells from Lieuwe van Gogh, great-great-grandson of Vincent’s brother Theo. The next time Strebe shows “Sugababe,” she tells Newscripts, she plans to regrow the ear’s cells using CRISPR/Cas9 technology.

Strebe collaborates with many scientists, including MIT’s Robert Langer and Harvard University’s Charles Vacanti, who once grew what looked like an ear on the back of a mouse. “Sugababe,” first showed in Germany in 2014, was on display at the Ronald Feldman gallery in New York City last year as part of a larger showing of Strebe’s work called “Free Radicals.”

For another piece, called “Litmus,” Strebe photographed 12 world-renowned scientists, including Nobel Laureates Martin Chalfie and Carol Greider, with litmus paper in their mouths. For her piece “Social Sculpture: The Scent of Joseph Beuys,” Strebe worked with International Flavors & Fragrances to re-create the smells of Beuys’s performance “I Like America and America Likes Me.” In this 1974 work, Beuys famously shared a room in a gallery with a coyote.

“Fragrance is just a moment, an impression,” Strebe says, “but it has enormous powers for reconstructing memories.” She and IFF were even able to re-create Beuys’s own body odor, thanks to a patron who kept some of the late artist’s clothes in a sealed plastic bag for decades.

In another art and science mash-up inspired by Vincent van Gogh, biologist Melanie Sullivan re-created “The Starry Night” in petri dishes for the American Society for Microbiology’s 2015 Agar Art Contest. 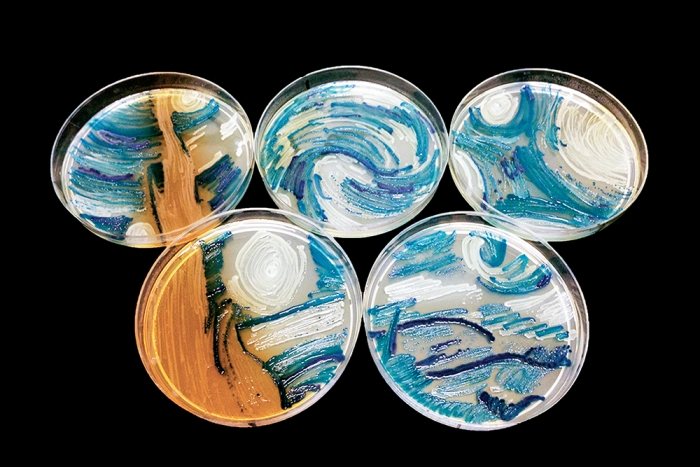 Credit: Melanie Sullivan
Stars and strains: “The Starry Night” as rendered with bacteria.

Sullivan, who works at Washington University in St. Louis used agar filled with chromogens—compounds that appear colored upon hydrolysis by specific enzymes in bacteria. Different bacteria produce different colors. In Sullivan’s work, Proteus mirabilis is responsible for the brown color, and Klebsiella pneumoniae gives the artwork its dark blue hue.

“When creating agar art, you are essentially drawing with invisible ink,” Sullivan tells Newscripts. “It’s not until the agar plates have been incubated and the bacteria have grown sufficiently that you know what you have.” A lover of van Gogh’s work, Sullivan reasoned “The Starry Night” could be executed simply with just four colors. Also, she says, “the swirling effect was more forgiving in the creation process.”

Sullivan didn’t win the contest, which stipulated artwork must be original. But her work has been featured in USA Today and the Huffington Post. Sadly, the petri-dish piece had to be trashed not long after it was made. “The combination of organisms used caused it to have a less-than-pleasant aroma,” Sullivan explains, “but that’s the nature of agar art.”