Why chemical companies are investing in high-end polymers 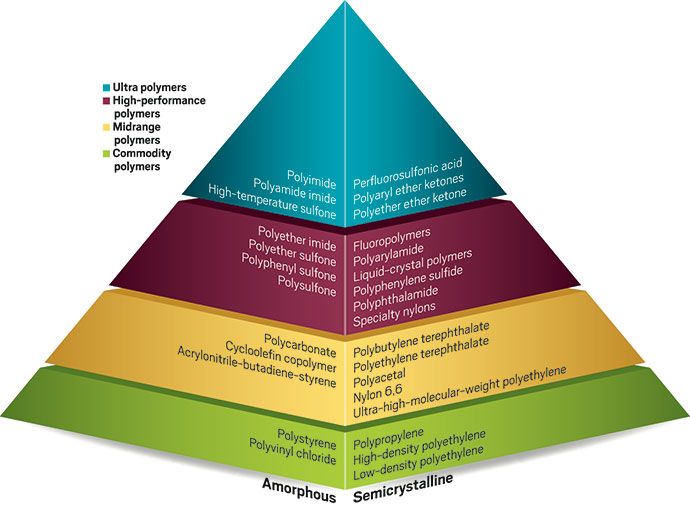 Polyether ether ketone, with its envelope-pushing material properties and hefty price tag, sits at the top of the polymer world above cheaper and more popular plastics.
Sources: Solvay, C&EN

The Finnish start-up Synoste is developing an implant that may soon offer relief to patients whose legs differ in length.

Surgeons insert Synoste’s rod-shaped device into the femur lengthwise. The patient periodically applies a magnetic field to the area, causing the implant to extend like a telescope. New bone then grows around it. The method can lengthen the leg by several centimeters over two to three months.

The device is made, in part, of polyether ether ketone. The polymer, also known as PEEK, makes the implant strong enough to support the weight of the patient. It’s also highly biocompatible.

“Nothing leaches out of the material into the body, and vice versa the body will not attack PEEK,” says Marc Knebel, who oversees the medical devices market for PEEK maker Evonik Industries, which has invested in Synoste. “Furthermore, PEEK as a polymer does not create artifacts on X-rays and is not magnetic in MRI.”

The material properties of PEEK are about as good as the polymer world can achieve. It is often the only plastic that can meet or exceed the properties of metals, ceramics, and thermoset composites. It is a true niche product—expensive and sold in volumes much smaller than big-name materials such as polyethylene or nylon.

But it might not remain obscure for long. Sensing opportunity, new companies are crowding into the business of making PEEK and the rest of its polymer family, often called aromatic polyketones or polyaryl ether ketones (PAEKs). For the business to accommodate them all, however, firms will have to convince product designers to abandon the familiar materials they’ve used for decades and adopt PAEKs instead.

PEEK is produced by combining hydroquinone and the exotic monomer difluorobenzophenone. The polymerization occurs in a solvent and at a temperature of around 300 °C.

The resulting aryl and ketone groups and the ester linkages in the polymer give PEEK many superlative properties. Biocompatibility is one example. PEEK is also among the most heat-resistant polymers; it can retain its strength and toughness up to about 250 °C. It has exceptional chemical, oxidation, hydrolysis, and fatigue resistance. It is naturally flame retardant and offers beneficial electrical properties.

“It solves a lot of the imponderable problems that people couldn’t otherwise deliver on,” says Stephen Dougherty, strategic marketing director for Victrex, the leading PEEK producer. In a typical application, he says, three or more of PEEK’s attributes come into play.

The virtues of PEEK and related PAEKs have led to successes in many demanding industries. The ability to withstand high temperatures, resist oil and other fluids, and endure repeated shocks favors automotive applications. Strength, durability, and flame retardancy have established PEEK in aerospace uses. Electrical and mechanical properties give it a presence in phones and other electronic devices. Resistance to chemicals and corrosion is important for equipment used in oil and gas exploration.

PAEKs are not cheap. Emanuel Ormonde, a polymers and elastomers analyst with IHS Chemical, says customers can pay between $90 and $120 per kg. In contrast, the polyethylene used to make milk bottles costs less than $2.00 per kg. PAEKs are many times more expensive than even other high-end polymers such as polyphenylene sulfide (PPS) and polyphthalamide (PPA).

But PAEK producers don’t see themselves competing against other polymers. “We are competing with metals,” says Chris Wilson, head of ultraperformance materials at Solvay Specialty Polymers. “All the materials that are in my line are very high performance, and they are not the cheapest materials. By the time we are talking to our customers, they have already vetted the lower-performing materials like PPS, PPA, and nylon.”

Victrex’s Dougherty adds that the key to selling PEEK is convincing engineers it can outperform metals while offering advantages such as lighter weight and lower fabrication costs. His company, a spin-off from ICI, invented PEEK in the 1970s and remains the market leader with upwards of 70% of the world’s production capacity for PAEKs, mostly PEEK.

“People grow up having been trained and educated in metal,” Dougherty says. “To make the transition to polymer—any polymer—is quite a step for them. But once they have made that step, they are already pretty enthused about it.”

Global capacity for PAEKs is about 10,000 metric tons per year, a minuscule amount by plastics standards. A single polyethylene plant can produce that much in a week.

IHS’s Ormonde pegs demand growth for PAEKs at roughly 5% annually through 2020. He acknowledges that his estimate is more conservative than those coming from the industry, which can reach as high as 10%. “Some PEEK is used in oil and gas exploration,” Ormonde says, and that industry has been hit hard by plummeting oil prices. Electronics markets have been somewhat tepid because of the slowing of China’s economy.

Undaunted, producers claim enormous potential for PAEKs in the long haul. Victrex, in its most recent annual report, points to an available market of 80,000 metric tons per year.

The industry is cultivating a number of new applications that might help PAEKs live up to their potential. One example is carbon fiber/PEEK composite pipe for offshore oil production that Victrex is helping to develop. Such pipe is much lighter than steel, is more corrosion and chemical resistant, and can be conveniently rolled in a spool. 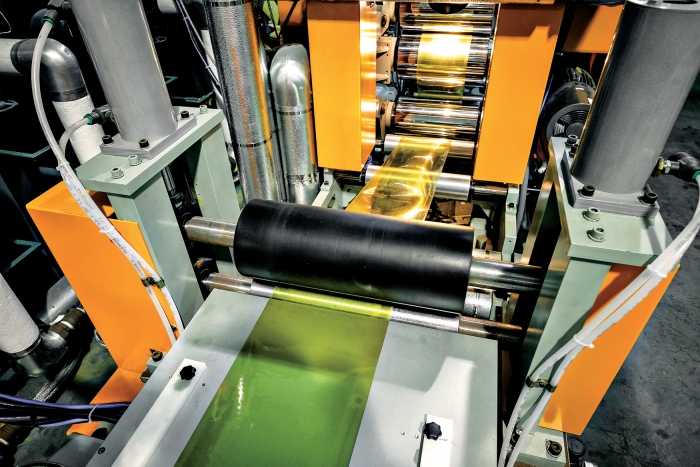 Credit: Arkema
Film is one of the promising areas of growth for polyaryl ether ketone polymers.

Thermoplastic composites for aircraft are another target market for PAEKs. Arkema has been looking to develop this area with polyether ketone ketone (PEKK), a copolymer of diphenyl ether with isophthaloyl chloride and terephthaloyl chloride.

Richard Audry, director of new business for Arkema, says the ratio of the monomers determines the crystallization kinetics and melting point. This way the company can design a PEKK with a relatively low melting point and slower crystallization, making it easier to process the polymer in a carbon fiber composite.

By using PAEK-based composites instead of composites made from thermosetting epoxies, aircraft manufacturers could eliminate the autoclaves needed to cure epoxies. Fabricating composite parts out of thermoplastics is also faster than with thermosets, Victrex’s Dougherty says, a big advantage for an aircraft industry struggling with a nine-year backlog of orders.

Audry thinks he can establish PEKK in three-dimensional printing, both in laser sintering and fused deposition modeling methods. Using slow-crystallization PEKK would allow layers of polymer to bind together better, limiting the risk of part failure.

Arkema is one of several newcomers to the PAEK business, attracted by the potential growth and profits. In the late 2000s, Audry recounts, the company was looking to augment its business in resins such polyvinylidene fluoride and nylon 11. It didn’t want to go head-to-head in PEEK against Evonik, Victrex, and Solvay. “We were interested in a product that was part of the PAEK family but with different features,” he says.

The company bought U.S.-based PEKK maker Oxford Performance Materials in 2009. Two years later Arkema established production in France in cooperation with the local fine chemicals firm PCAS. Arkema is completing a doubling of its French capacity this year and is considering a plant in Mobile, Ala.

Celanese, which makes other high-end polymers, is entering the PEEK business later this year with compounded products made from polymer supplied by other firms.

Solvay’s first entry into the market was also as a compounder of other companies’ polymer. Wilson says the nucleophilic chemistry preferred for making PEEK is a natural extension of the process Solvay and its forebears used for 40 years to make polysulfones in Augusta, Ga. “It was natural for us to decide to invest in this direction,” he says.

The company purchased a PEEK plant in Panoli, India, in 2006. It converted the electrophilic technology used at the site to its own nucleophilic process.

Now Solvay is expanding the Indian site. At the same time, in Augusta the company is building the first U.S. PEEK plant, which will start up later this year. The expansions will bring its total PEEK capacity to 2,500 metric tons per year.

Longtime PEEK makers Evonik and Victrex haven’t been sitting still. Last year, Victrex completed an expansion at its U.K. facility that brought its capacity to 7,000 metric tons per year. Evonik is boosting production by an unspecified amount at its Chinese plant.

Victrex’s Dougherty claims not to mind the competition. “On a fundamental level, competition is good,” he says. He thinks the PAEK industry is better off with multiple players working on new applications and offering customers choices and security of supply.

“When you have competition, it accelerates growth of the overall market. But would we like to have that all to ourselves?” he muses. “Of course we would.”

Polymers
The chemical industry is bracing for a nylon 6,6 shortage
3-D Printing
Evonik develops new 3-D printing polymer﻿﻿﻿
Business
Dow Launches New Polyethylene
Share X
To send an e-mail to multiple recipients, separate e-mail addresses with a comma, semicolon, or both.
Title: Why chemical companies are investing in high-end polymers
Author: Alexander H. Tullo
Chemical & Engineering News will not share your email address with any other person or company.