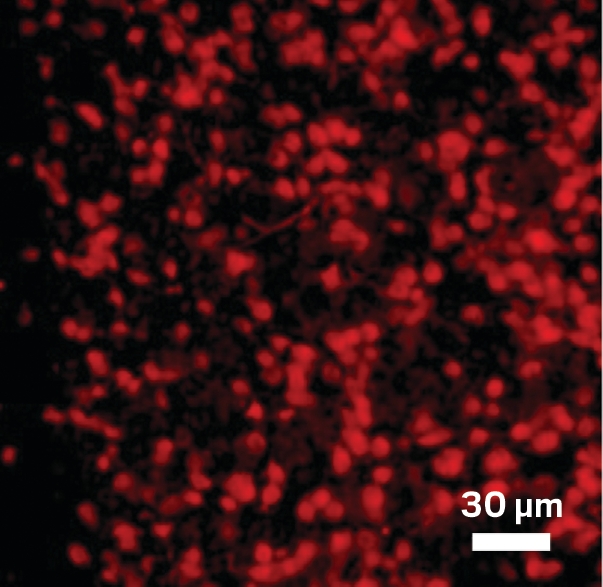 Amyloid-β peptides, widely believed to cause Alzheimer’s disease, can enter mitochondria and interact with proteins inside the organelles. For reasons that are not yet understood, this induces mitochondria to produce fewer energy-carrying molecules and more reactive oxidative species such as superoxide anions and hydrogen peroxide.

Scientists have tried to treat mice carrying Alzheimer’s-causing gene mutations with antioxidant molecules that target mitochondria. These small molecules carry a lipophilic cation based on triphenylphosphonium that drives them to accumulate inside negatively charged mitochondria. The therapy has shown some success in mice, “but evidence of efficacy in human subjects is at best minimal,” says Russell Swerdlow, director of the University of Kansas Alzheimer’s Disease Center.

A team led by Taeghwan Hyeon at the Institute for Basic Science and Inhee Mook-Jung from Seoul National University thought ceria nanoparticles might work better. They are more stable than small molecules and degrade less easily in the body. Unlike the small molecules tested so far, which only get rid of hydrogen peroxide, ceria nanoparticles can protect cells against superoxide and hydrogen peroxide, the two predominant oxidative species, says Hyeon.

To neutralize both oxidative species, the team decorated ceria nanoparticles with mitochondria-targeting triphenylphosphonium and injected them into the brains of four-month old mice carrying Alzheimer’s disease-causing gene mutations. At that age, mice with these mutations start showing neuron loss, and by six months, they show severe Alzheimer’s disease with cognitive loss. So two months after the treatment, the researchers took brain slices from the treated mice and stained the neurons in order to count them using fluorescence microscopy. The treated mice had 40% more neurons than untreated mice, though they still had fewer neurons than healthy mice.

Additional studies are required to understand the precise mechanism by which the nanoparticles prevent neurons from dying, Mook-Jung says. But because it reduces neuron loss, presumably indicating restored mitochondrial function, “this nanoparticle therapy is a promising strategy to treat neurodegenerative diseases including Alzheimer’s.”

“The development of a mitochondria-targeting nanoparticle as an antioxidant is novel,” Swerdlow says. “Targeting neuronal death, as well as its possible triggers, is a conceptually attractive neurodegenerative disease therapeutic target.”

The need for a brain injection makes the new therapy slightly less practical than small molecules, which can cross the blood-brain barrier, says Gang Liu of the University of Utah School of Medicine. Both Swerdlow and Liu say that the nanoparticle therapy has a long way to go before it is practical. “We will need to know more about the nanoparticles’ potential toxicity and its bioavailability before it can be used as an Alzheimer’s therapeutic.”