Stale beer? There’s an app for that 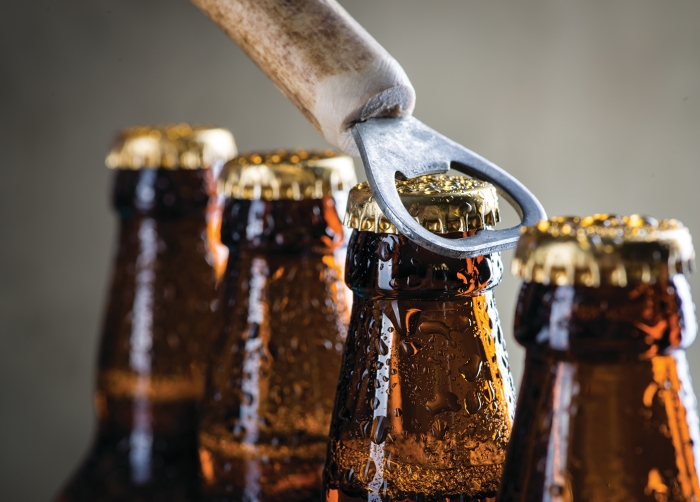 Credit: Shutterstock
Mmm…beer. But is it fresh?
A polymer indicator disc slowly turns pink as it reacts with furfural, an indicator of bad beer. (Shown at 5x speed.)
Credit: María Cruz Moreno-Bondi

Brewers measure furfural and other freshness indicators using techniques such as high performance liquid chromatography (HPLC), but this involves expensive equipment and time-consuming sample preparation. Although there are other colorimetric methods, they are only able to detect a narrow range of concentrations and are not used in the brewing industry.

The polymer film, developed by María Cruz Moreno-Bondi and colleagues at the Complutense University of Madrid, incorporates 4-vinylaniline, which reacts with furfural to produce a red cyanine derivative. The researchers blended the 4-vinylaniline monomer with ethylene glycol dimethacrylate, a cross-linker that strengthens the polymer film, and 2-hydroxyethylmethacrylate, which increases its hydrophilicity. Heating the ingredients in a mold at 70 °C for 24 hours produced a flexible film, which the researchers cut into 6-mm-wide discs.

They dipped the discs in diluted samples of old lager beer provided by Spanish brewer Mahou-San Miguel, and saw that the films changed from pale yellow to pink over the course of an hour. With the help of HPLC measurements, they directly related the final color of the film to the samples’ furfural concentrations. “We were very surprised at the reproducibility,” says Moreno-Bondi.

Then they created an Android app, loaded with this calibration curve, which could interpret a smartphone snapshot of an indicator disc to identify furfural concentrations from 39 to 500 μg/L. Drinkers can typically taste furfural at concentrations of about 400 μg/L, notes Moreno-Bondi.

The app is not really designed for consumers, she says. Instead, Mahou-San Miguel is interested in developing the test for its own use, potentially to offer a quick check on their beer immediately before shipping. “With a global market, these measurements will be more and more important,” she says.

Comments
han buwalda (April 4, 2016 6:58 AM)
Wow this is ready made science for my neighbours AND students. I coukd ask my students to write a short manual (this iwll be short!) and some theory.
Chemistry is in fact a colourful science :-)