Perspectives: The chemistry between us

Radhakrishnan reads one of her poems: “The Radioactive Dating Game.”
Credit: PBS Newshour

My jaw dropped as a student stood up in the middle of my high school chemistry class and protested the change in his assigned seat after I’d moved him from his previous one to the back row. Moments later, he abruptly stormed out of the classroom. The other students looked on in disbelief.

I had to defuse the situation, so I asked the class why he might have been so upset. Maybe he didn’t feel like part of the class from the back row, they nervously brainstormed. Maybe he felt somewhat isolated or less important, they murmured. With a playful look in my eye, I asked: “Do you think he kinda felt like a valence electron?” Nervous giggles became laughter and sighs of relief when they realized that the student and I had teamed up to play a trick on the class with some improv theater, in which he had personified a valence electron. 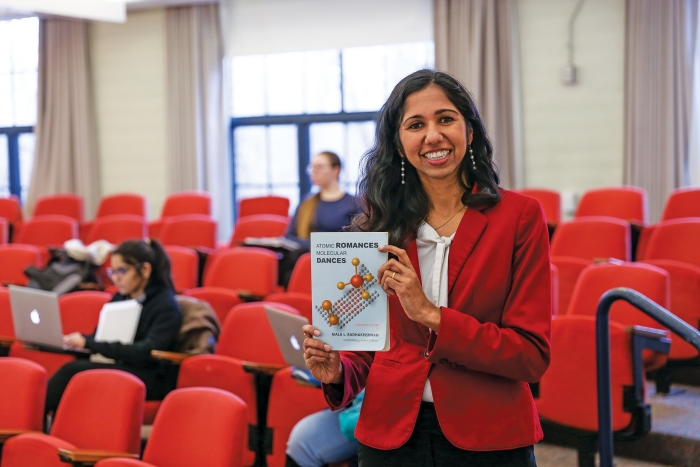 Credit: Ping Ji
Wellesley College’s Radhakrishnan poses with her book of poetry that she uses to bring chemistry to life for her students.

We have all heard the statistics bemoaning the U.S.’s global standing in the sciences. According to the latest PISA report, released last month, the U.S. ranks behind approximately two dozen countries across Europe, Asia, and elsewhere. PISA, which stands for Programme for International Student Assessment, is an international survey of 15-year-olds conducted by the Organization for Economic Cooperation & Development. With science-based approaches playing an ever-important role in solving global issues, it is especially timely to think critically about how students, at least in the U.S., engage with science ... and how we teach it.

It is especially timely to think critically about how students, at least in the U.S., engage with science ... and how we teach it.

Too often chemistry causes groans and instills fear in students. In fact, now as a college physical chemistry professor I know all too well the inexplicable level of panic caused by our discipline. Why is this? Often it’s because the content we teach is made inaccessible, dry, or irrelevant.

But consider this: When you have a romantic crush on someone, but don’t have the nerve to act on it, you’re like a molecule under kinetic control waiting for a “wingman” catalyst. When it’s unclear if your relationship with someone is “friend” or “significant other,” you’re like an electron in a superposition of eigenstates, maintaining both labels simultaneously. When you wait in line at the movies, you’re like a substrate experiencing zeroth-order kinetics resulting from a saturated enzyme. What I’m saying here is that students—and everyone really—can connect with chemistry because we already do so every day without realizing it.

The answer to helping our students better connect with chemistry may lie in the very things many people think are unscientific: creativity and humanity—or a little personification. As someone who has taught chemistry at both the high school and college levels to a wide range of students, I have consistently used personification and narrative storytelling. Electrons, atoms, molecules: They’re just like us. They simply want to be happy, though their happiness is measured in energy units, rather than in smiles or emojis.

I have found that educators can make the molecular world more accessible by allowing themselves and students to use creative expressions that relate the molecular world to our familiar world. Consider that we all watch soap operas and crime shows, where people’s explosive relationships captivate us. But another set of dramas is happening all around us, countless times every second. Multiply the plot twists of “Days of Our Lives” by Avogadro’s number and you have the making of one episode of, well, “Days of Our Half-Lives.” In fact, several studies have shown that techniques such as personification and analogies can often be used successfully, especially if students are debriefed as part of the learning process. 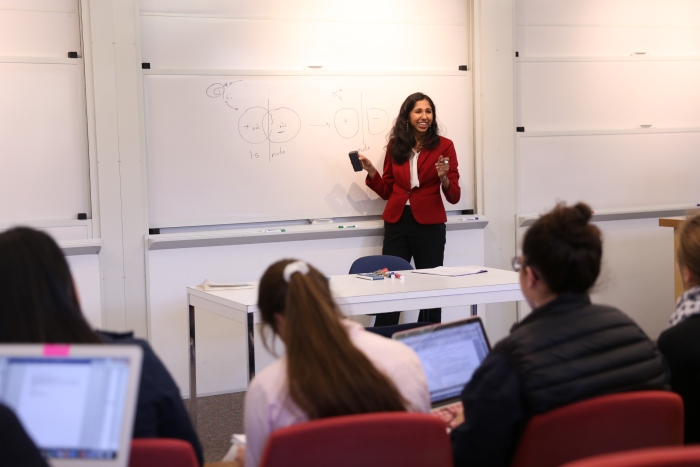 My personal catalyst for using analogies and personification in chemistry was a former mentor teacher. She likened a single replacement reaction, in which one chemical species essentially replaces its potential partner with another, to a “home wrecker” situation. I was hooked.

I started using personification, analogies, and narrative storytelling in nearly every lesson, and I urged my students to do the same. I turned some of my molecular-level soap operas into humorous, rhyming verse, which I share in my classroom. I started reading my “chemistry poetry” weekly at a local open mic, and it was a consistent hit with the nonscientific crowd.

When a critical mass of people told me that they understood and enjoyed chemistry from these poems, I realized that creative expression may be the best catalyst chemistry has seen. Eventually, I published my poems as a collection entitled “Atomic Romances, Molecular Dances,” which educators at both the high school and college levels are using to lower the activation-energy barrier to connecting with chemistry. But analogies and personification need not be limited to students or nonscientific audiences; in fact, I often use such techniques when presenting my research at scientific conferences and seminars—after all, what harm can it do to make one’s scholarly work more accessible to others?

Critics might say that verse and analogies “dumb down” the science or can mislead students into believing that atoms really have feelings or can act with intent. But I feel just the opposite. After all, everything in chemistry, from Lewis structures to the Schrödinger equation, is but a model, and so are analogies. Every model is imperfect, and the more we explore them, the more we can have substantive discussions about their strengths and limitations, ultimately leading to a deeper understanding of the truths they attempt to represent.

So when it comes to personally connecting with chemistry, aspire to be a valence electron that makes chemistry happen, but don’t keep your distance by thinking you would be better off someplace else. Immerse yourself in the kinetics of the soap opera, feel the attraction, and help yourself and others become better equipped to use chemistry and all science to solve humankind’s important challenges.

Mala L. Radhakrishnan is an associate professor of chemistry at Wellesley College. When she is not tending to her core and valence electrons through creatively teaching chemistry, Radhakrishnan is a computational biophysical chemist studying the structural determinants of biomolecular and drug-target interactions.

Periodic Table
Meet the 'I Spy a Periodic Table' Readers’ Choice winner
Environment
Chemistry Education For The YouTube Generation
Education
Breaking Good, Not Bad
Share X
To send an e-mail to multiple recipients, separate e-mail addresses with a comma, semicolon, or both.
Title: Perspectives: The chemistry between us
Author: Mala L. Radhakrishnan, Wellesley College
Chemical & Engineering News will not share your email address with any other person or company.

Comments
Brian (January 5, 2017 6:19 AM)
As a teacher, I too recognize the value of using humor, creativity, and models students can relate to. It's inspiring to hear how another instructor does it.
Reply »

Mala Radhakrishnan (January 6, 2017 9:17 AM)
Hi Brian, Thanks so much for the comment. I'm sure your students appreciate your relating to them!
Reply »

Kristal (January 8, 2017 10:04 PM)
Professor, I still remember your analogy about Le Châtelier's principle being like a party with multiple rooms. Your class was fantastic. So glad I saw this article- I'm teaching a biology class starting Tuesday and now I'm going to look for more analogies to use. Thank you!
Reply »