The biggest self-assembled supramolecular cage ever

Researchers create one new giant cage complex, then predict and build an even bigger one

[+]Enlarge
Credit: Courtesy of Daishi Fujita & Makoto Fujita
In this X-ray crystal structure of Pd48L96, Pd2+ ions are linked to one another by selenophene bipyridyl ligands. 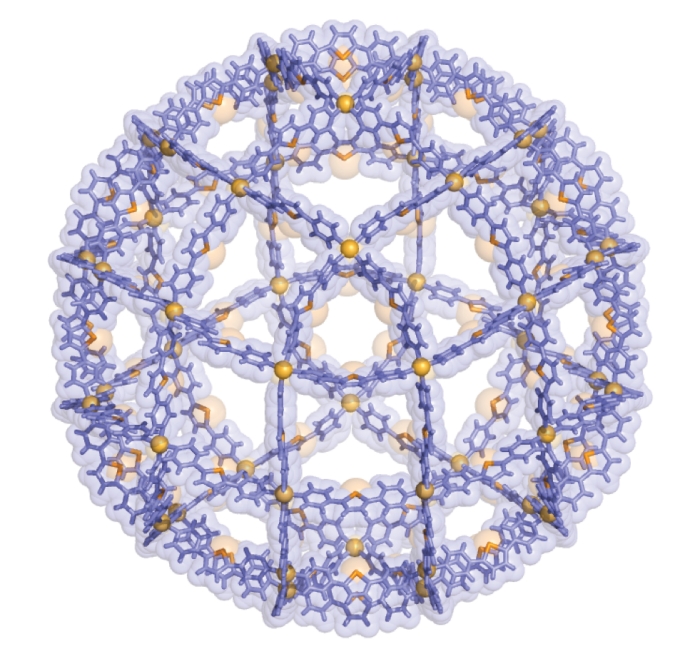 Credit: Courtesy of Daishi Fujita & Makoto Fujita
In this X-ray crystal structure of Pd48L96, Pd2+ ions are linked to one another by selenophene bipyridyl ligands.

Several chemistry groups have been competing to make increasingly large cagelike supramolecules that can do useful things, such as host biomolecular guests or act as drugs. The effort is like trying to create bigger and bigger bubbles that are stable enough not to pop.

Daishi Fujita and Makoto Fujita of the University of Tokyo and coworkers have now created a cage compound made with 48 palladium ions connected by 96 ligands. It’s bigger than any previous nonbiological self-assembled molecule having a defined atomic composition (Nature 2016, DOI: 10.1038/nature20771).

Over the past two decades, Makoto Fujita’s group has used this same palladium-ligand motif to assemble a collection of large cage structures. The researchers predicted theoretically that these structures would be PdnL2n cages in which L is an organic ligand and the number of metal ions, n, equals 6, 12, 24, 30, or 60. Varying the structure of the ligand enabled the team to synthesize the first four members of this series of so-called Archimedean solids, up to Pd30L60.

While trying to make the largest member of the series, Pd60L120, by using a selenophene bipyridyl ligand with a slightly larger bend angle than a previously used thiophene ligand, the researchers serendipitously made a non-Archimedean Pd30L60 cage, a member of a family called tetravalent Goldberg polyhedra. Trivalent Goldberg polyhedra, which include fullerenes, had been synthesized before and form naturally as viral capsids.

The Tokyo group used simple geometry and graph theory to predict that the next member of the tetravalent Goldberg polyhedral family, beyond Pd30L60, would be Pd48L96. By changing the self-assembly reaction conditions and using the same selenophene ligand, they succeeded in making Pd48L96 and obtained its X-ray structure. The research team believes the combined 144 palladium ions and ligands represent the largest number of components in any self-assembled supramolecular cage structure, outside of biological structures.

Supramolecular self-assembly expert Peter J. Stang of the University of Utah calls the study “highly original and very creative. It is indeed remarkable that the authors were able to assemble such a large system from so many components and to determine its structure. It is not easy to grow crystals and get X-rays for such large compounds.”

Jonathan R. Nitschke of the University of Cambridge, who specializes in self-assembly, calls the work “a milestone in the preparation of very large new self-assembled cages—a really exciting tour de force. The authors had to extend the mathematics of Goldberg polyhedra to account for these structures.”

“This is a terrific result,” adds Kenneth N. Raymond of the University of California, Berkeley, another specialist in supramolecular chemistry. “The Pd48L96 complex is the biggest and the best.”

Next up for the group, Daishi Fujita says, is to uncover other self-assembly design principles like the one in the new paper, fabricate additional complex structures, and investigate potential applications.

Inorganic Chemistry
Transition-metal complex takes on an unexpected hexagonal planar structure
Synthesis
A new molecular star is born
Inorganic Chemistry
The biggest self-assembled supramolecular cage ever
Share X
To send an e-mail to multiple recipients, separate e-mail addresses with a comma, semicolon, or both.
Title: The biggest self-assembled supramolecular cage ever
Author: Stu Borman
Chemical & Engineering News will not share your email address with any other person or company.