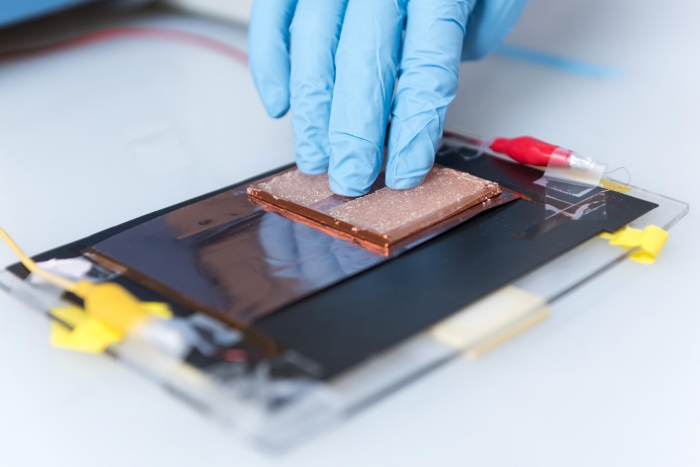 Credit: Rob Felt/Georgia Tech
Sliding two triboelectric layers across each other generates a charge that can power a nanoelectrospray ion source.

If you’ve ever rubbed a balloon against your head to make your hair stand on end, you’ve experienced triboelectricity. Researchers at Georgia Tech are now putting such electricity—which is really just an electric charge generated by friction—to good use: They’re using triboelectricity to drive the ionization of molecules in a mass spectrometer.

These TENGs consist of a pair of electrodes and at least one pair of triboelectric layers, which are made of copper films on a polymer support. Movement of the layers relative to one another generates a charge that flows through the electrodes to an external circuit that includes a nanoelectrospray emitter. The layers’ surface area dictates the amount of charge generated. In the nanoelectrospray emitter, the charge ionizes molecules as droplets are generated from the sample solution.

The researchers made TENGs in two configurations. In one, the layers slide across each other. In the other, the layers press together and then separate. The sliding version generates charge pulses with alternating polarity, depending on the direction of motion. The pulses in both versions contain controlled amounts of charge.

With these devices, no external power supply is needed for ionization. “You can literally rub the two surfaces together by hand, and that’s enough to produce charges to ionize molecules,” Fernández says.

Fernández and coworkers “have created a simple method for the on-demand generation of a predetermined amount of ions,” Vertes says. “The ability to control the amount of ions per pulse is an important advantage for efficient detection and analysis by a variety of mass spectrometers. This efficiency translates into superb sensitivity for a broad variety of samples.”

That sensitivity makes the source ideal for working with tiny sample volumes. “This is a great ion source if you have very precious samples,” he says. “You don’t want to consume the whole sample to perform your analysis.”

In addition to being small and sensitive, the source is also inexpensive. “It’s probably the cheapest ion source you can think of,” Fernández says. “You can literally build these for less than $2.00.”

Renato Zenobi, a chemistry professor at ETH Zurich who studies ionization methods, suggests that such devices could be used with portable or handheld mass spectrometers.

Fernández plans to use the source to analyze compound libraries generated as part of chemical evolution and origins-of-life research at Georgia Tech. He also hopes to revisit some of the work that his group has done previously to detect counterfeit pharmaceuticals.

Comments
Facundo Fernandez (March 2, 2017 9:33 AM)
It's been a wonderful collaboration. Hope other labs take this technique up and further apply it!
Reply »

As Sir Fred Hoyle once famously said, "There are many ways of knocking electrons out of atoms. The simplest is to rub two surfaces together."
Reply »