[+]Enlarge
A bimetallic reagent’s anchoring palladium (near center) coordinates with the nitrogen atom of a substrate (quinoline in this case, red), positioning the reagent’s second palladium (lower right) to activate a remote C–H bond (green). 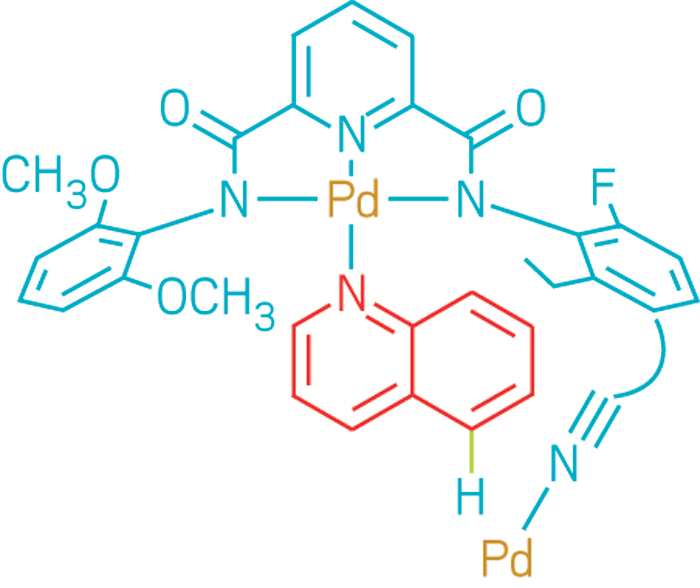 A bimetallic reagent’s anchoring palladium (near center) coordinates with the nitrogen atom of a substrate (quinoline in this case, red), positioning the reagent’s second palladium (lower right) to activate a remote C–H bond (green).

A new class of bimetallic reagents now uses enzyme-inspired reversible metal coordination, instead of covalent bonding, to achieve C–H activation and functionalization in nitrogen heterocycles, with no need to preinstall or later remove a directing group. The reagents, designed by Jin-Quan Yu and coworkers at Scripps Research Institute California, also activate remote C–H bonds that have been difficult to reach or completely inaccessible with other synthetic techniques (Nature 2017, DOI: 10.1038/nature21418).

C–H activation hasn’t worked well with heterocycles because metal activators tend to coordinate with heteroatoms, interfering with site selectivity. Yu and coworkers have now turned that problem into an advantage. In their new bimetallic reagents, one palladium atom is designed intentionally to coordinate reversibly with the heteroatom of a substrate, positioning the second metal to activate a remote C–H bond.

The reagents use distance and geometry constraints to focus on specific target sites on substrates, like enzymes do. They coordinate reversibly with substrate molecules, derivatize them, detach after activation, and then move on to activate other substrate molecules, also like enzymes do. The reagents work stoichiometrically or catalytically, and relatively large amounts are required. But their efficiency can potentially be improved, experts say.

Yu and coworkers used the new reagents to alkenylate a range of nitrogen heterocycles, including phenylpyridine, quinoline, and the anticancer natural product camptothecin, none of which could previously be functionalized in the same way using C–H activation, Yu says.

Motomu Kanai of the University of ­Tokyo comments that the technique is “very powerful,” noting that it could ease drug design by making it possible to modify compounds at positions other methods cannot easily reach. Victor Snieckus of Queen’s University in Ontario calls the discovery “a major leap forward in synthetic aromatic substitution chemistry.” And Kian Tan, who leads the Chemical Technology-Synthesis group at Novartis in Cambridge, Mass., says the templates are amazingly well designed and versatile, making it “easy to envision creating libraries of templates to access different selectivity patterns.”