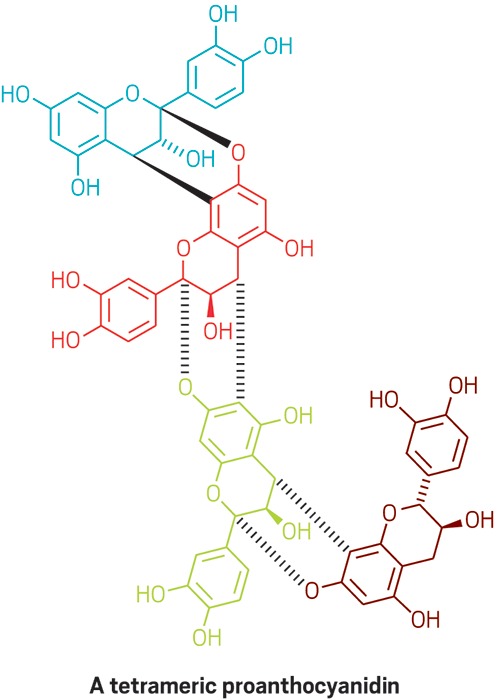 A mouth full of metal is becoming a thing of the past. Modern tooth-colored fillings made from resin-based composites can attractively repair the surface of teeth, but they often crack or fail after five to eight years. Replacement means more drilling, costing healthy tooth tissue. Now, researchers have characterized a plant extract that may strengthen the interface between tooth and filling, extending the lifespan of dental restorations and minimizing tooth loss (J. Org. Chem. 2017, DOI: 10.1021/acs.joc.6b02161).

Dentin makes up the bulk of the calcified extracellular tissue of teeth, forming the layer just beneath the hard external enamel. It is mostly made of the protein collagen. “Resins have to bind to the dentin, and that interface is the weak point. This is why the restorations don’t last,” says study coauthor Guido F. Pauli of the University of Illinois, Chicago.

In previous studies, Pauli’s team had discovered that extracts from pine bark form chemical cross-links with collagen in dentin. “There is an enhancement of up to tenfold in the hardening of dentin,” Pauli says. “This is a huge jump in the biomechanical properties.” The researchers were able to identify active agents in the bark extracts called proanthocyanidins, flavonoids found in many natural products that exist as oligomers with up to six or more linked subunits. In the current study, they aimed to identify the specific structural motifs within the proanthocyanidins that lead to the increase in dentin’s strength.

As a first step, the researchers separated the pine bark extract into fractions based on the number of linked monomers using chromatography and then tested each fraction for dentin-strengthening activity. The assay involved applying the fractions to pieces of a human molar, then measuring the tooth’s deformation after applying a force to its surface. Teeth treated with fractions containing complicated mixtures of trimeric and tetrameric proanthocyanidins exhibited the least give, even up to 12 months after application.

Next the researchers characterized the molecular structures of the compounds in these fractions using nuclear magnetic resonance spectroscopy. This was difficult, Pauli says, because of the compounds’ complicated stereochemistry and size. In the process, the researchers identified two new proanthocyanidins and determined their structures along with several others that were already known. The ultimate goal, Pauli says, is to develop a refined pine bark extract that dentists could apply to the surface of a tooth, strengthening the dentin and preparing it to form a more durable bond to the resin. “We are not envisioning a pure compound; the chemistry is too complex,” he says.

Daneel Ferreira of the University of Mississippi says that scientists have known for many years that proanthocyanidins cross-link with proteins because of how they interfere with all kinds of enzymatic bioassays. “That is why they typically are regarded as a nuisance,” he says. Using that property to strengthen dentin is “a totally unexpected and novel application. It is really an important breakthrough.”

Comments
Dr. V..K. Varshney (March 20, 2017 10:57 AM)
Excellent innovation with novel application. Congratulations to the inventors. Pine forests in India are the conserved forests. Being a forest chemist I am highly stimulated by this research for exploring the potential of other tree barks available as plantations by products for strengthening of dentin.
Reply »

KM (March 21, 2017 7:24 AM)
The molecules shown are basically tannins, are they not? Given that, I would expect that they are highly colored. Does their color pose a problem with the intended application? - I suspect it might.
Reply »

Tony Covington (April 10, 2017 7:45 AM)
This is an interesting crossover and application of polyphenols, probably more familiar as tanning agents, which is my subject. However, the use of condensed tannins for making polymers and adhesives is also well known.
If we can be of any assistance, please get in touch.
Anthony D. Covington DSc
Emeritus Professor of Leather Science
Institute for Creative Leather Technologies
The University of Northampton, UK
Reply »