DNA may act as a wire during replication

Credit: Science
Using DNA tethered to a gold electrode for electrochemical studies, researchers determined that primase binds tightly to DNA when its [4Fe4S] cluster is oxidized (left). They propose that electron transfer from the [4Fe4S] cluster of polymerase α to that of primase via the DNA-primer double helix promotes handoff of that helix for primer elongation (right).

DNA replication is a complicated affair: Proteins must identify where on DNA to start replicating, unwind the double helix, synthesize a primer, and then elongate the DNA strand from the end of that primer. The activity of these proteins is carefully orchestrated to ensure the DNA gets replicated accurately.

Increasingly, biochemical researchers are finding that many of the proteins involved in DNA replication incorporate iron-sulfur clusters, which enzymes commonly use for electron transfer. Experiments now suggest that those clusters serve to send a signal through the DNA double helix being synthesized to promote the handoff of the DNA from one replication protein to another (Science 2017, DOI: 10.1126/science.aag1789).

“This study represents a significant step forward in several aspects” of our understanding of the control and coordination of DNA replication, comments Tracey Rouault, head of the Molecular Medicine Branch of the National Institute of Child Health & Human Development and a researcher of iron-sulfur cluster biogenesis. “This represents a unique sensing and regulatory system that would contribute greatly to maintaining the integrity of the genome.”

Although researchers have been studying DNA-processing proteins for several decades, it wasn’t until recently that they began to realize that many of them contain iron-sulfur clusters. Biochemists hadn’t recognized that if you don’t isolate the proteins in an oxygen-limited environment such as the one inside cells, then the clusters fall apart, says Walter J. Chazin, a professor of biochemistry at Vanderbilt University who studies DNA replication, damage response, and repair.

In the past 10 years, scientists have identified iron-sulfur clusters in several classes of proteins involved in DNA replication, repair, and transcription. But despite their presence in so many proteins, the clusters’ role remains unclear. Such clusters are energetically costly for cells to assemble and place into proteins, suggesting that they have an important functional role.

Another ongoing mystery of DNA replication is how the different protein players signal and hand off DNA as it is duplicated. In the human replisome, after a protein unwinds the DNA helix, a primase binds to one of the single strands of DNA. Primase creates an initial eight- to 12-nucleotide primer out of RNA, forming a DNA-RNA hybrid helix. Primase then passes the DNA-primer complex to polymerase α, which adds about 20 DNA nucleotides to the primer. Then polymerase α passes the elongated primer to one of the so-called processive polymerases, ε and δ, that replicate the bulk of DNA. Some scientists, but not all, believe that primase and these polymerases all contain iron-sulfur clusters. 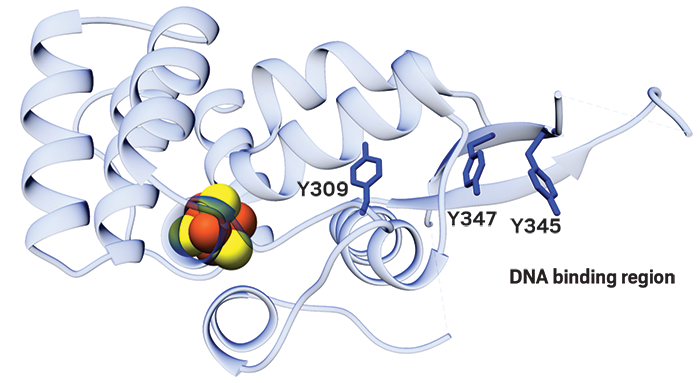 Credit: Science
Three conserved tyrosine residues in primase can serve as an electron conduit between DNA and the protein’s [4Fe4S] cluster (spheres).

In the new research, a team led by Chazin along with California Institute of Technology chemistry graduate student Elizabeth O’Brien and professor Jacqueline K. Barton studied human DNA primase using a DNA-mediated electrochemistry technique developed by Barton. In the experimental system, the researchers covalently attach double-stranded DNA to a gold electrode. The setup allows measurement of charge transport via the stacked DNA bases between the gold surface and a redox-active species bound to the other end of the DNA.

The research team found that primase binds to DNA tightly when the primase’s cluster is in the oxidized [4Fe4S]3+ state and loosely when the cluster is in the reduced [4Fe4S]2+ state. The scientists concluded that the cluster acts as a redox switch for primase to bind to DNA and begin primer synthesis, then dissociate when the primer is complete. Exactly how the cluster’s oxidation state affects primase’s DNA-binding affinity—whether through altered electrostatics, altered conformation, or a combination of the two—remains to be determined.

The team also found that primase has three conserved tyrosine residues located between the cluster and the DNA-binding interface that can act as a pathway to transfer charge from DNA to the cluster. Tyrosine residues mediate electron transport in a number of proteins. In primase, mutating any one of the tyrosines to a less easily ionized phenylalanine impairs primer initiation.

Additionally, a base mismatch in the DNA-RNA helix impairs primase’s ability to truncate primers when synthesis is complete. Such a mismatch inhibits charge transport through the helix.

It provides a framework to think about roles for the iron- sulfur clusters that are generally appearing in DNA-processing enzymes.
Jacqueline K. Barton, chemistry professor, California Institute of Technology

Pulling all the results together, the researchers propose a mechanism in which primase with an oxidized iron-sulfur cluster binds to a single strand of DNA and initiates primer synthesis. When the initial primer is long enough, another enzyme—likely polymerase α—transfers an electron from its iron-sulfur cluster through the primed double helix to reduce primase’s cluster. The reduced primase dissocates from the DNA while the oxidized polymerase α binds more tightly and continues elongation of the growing strand.

The next research step, Chazin notes, is to repeat the experiments with the primase and polymerase α both bound to DNA to determine whether the two proteins can in fact communicate via DNA charge transport.

Barton pioneered the concept that DNA could be used to do long-range electron transport. Other work from her lab has suggested that DNA repair proteins may use their iron-sulfur clusters in conjunction with DNA charge transport to identify areas of damage (Biochemistry 2015, DOI:10.1021/bi501520w).

“It’s very appealing now to think about different proteins using long-range electron transport to provide rapid chemistry that’s directed through the DNA helix and depends upon the integrity of the DNA stack,” Barton says. “It provides a framework to think about roles for the iron-sulfur clusters that are generally appearing in DNA-processing enzymes.”

Biotechnology
CRISPR enzyme from groundwater bacteria shows unusual properties
Biological Chemistry
Researchers settle long-standing debate on chromosome-compacting complex
Biological Chemistry
A step toward mitochondrial gene therapy
Share X
To send an e-mail to multiple recipients, separate e-mail addresses with a comma, semicolon, or both.
Title: DNA may act as a wire during replication
Author: Jyllian Kemsley
Chemical & Engineering News will not share your email address with any other person or company.