Reversing resistance to a tuberculosis antibiotic 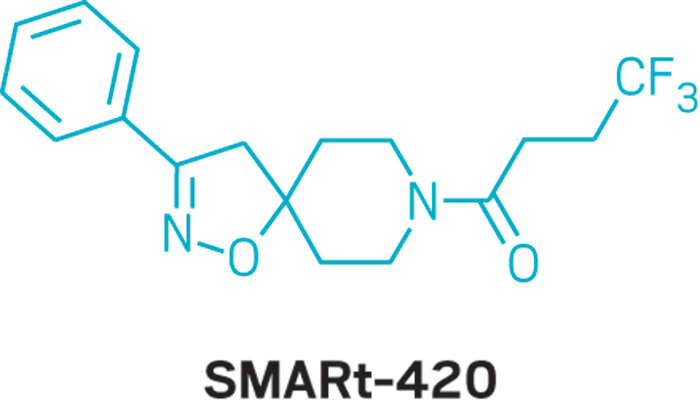 Some of the most powerful tuberculosis antibiotics are prodrugs, compounds that need to be chemically modified by the disease-causing pathogen itself to become deadly. For those who study antibiotic resistance, it’s no surprise that Mycobacterium tuberculosis has evolved ways to avoid converting these prodrugs into lethal armaments. The bacterium’s resistance strategies “seriously undermine efforts to control the global epidemic of tuberculosis” and are partly responsible for the 250,000 drug-resistant, tuberculosis-caused deaths in 2015, note a team of authors led by Alain R. Baulard, Benoit Déprez, and Nicolas Willand of the University of Lille.

These researchers are now reporting a small molecule called SMARt-420 that can counteract resistance to the tuberculosis prodrug ethionamide, breathing new life into the old antibiotic (Science 2017, DOI: 10.1126/science.aag1006).

In nonresistant M. tuberculosis, ethionamide is deadly because the bacterial enzyme EthA jump-starts a biotransformation process that appends nicotinamide adenine dinucleotide to the antibiotic, thereby creating an adduct that blocks biosynthesis of the pathogen’s cell wall. Resistant tuberculosis strains, however, have evolved mutations in the EthA enzyme that prevent production of the ethionamide adduct.

The newly reported molecule SMARt-420 triggers a previously unknown biochemical pathway in the bacterium that activates ethionamide. So SMARt-420 circumvents the antibiotic’s classic activation pathway, for which there is now antibiotic resistance, and restores the old drug’s lethal power over the bacterium. The researchers report that they cured mice infected with ethionamide-resistant tuberculosis by dosing them with ethionamide and SMARt-420.