Margaret Faul, leader of the sustainability transition, discusses the firm’s strategy to reduce waste and save time and money 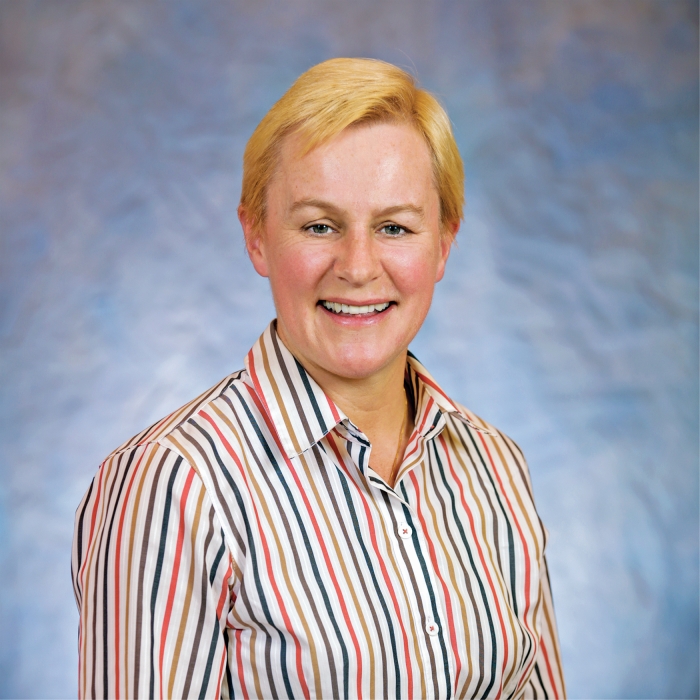 Green chemistry aims to minimize impact on the environment, but it can also save manufacturers time and money, making the approach good for the bottom line. Recognizing this, many pharmaceutical companies have shifted toward green processes for drug discovery and development in the past decade. Margaret Faul, a synthetic organic chemist by training, led this move at Amgen, one of the world’s largest biotechnology companies. The process involved not only developing greener and more sustainable chemical processes but also embedding this approach in the organization’s work culture. The efforts paid off: Amgen went from 106th in 2014 to 34th in 2015 in the Global Green Rankings. The company has also earned a spot on the selective Dow Jones Sustainability World Index. Faul talked with Prachi Patel about how Amgen made the shift to greener synthetic chemistry.

Why are green chemistry practices important for Amgen and the pharmaceutical industry in general?

Favorite molecule: Etelcalcetide, because of the significant investment and impact our team had in development of the commercial process

Hobbies: Running (completed the Chicago Marathon in 2014) and bicycling

The synthetic processes we use to make active pharmaceutical ingredients can generate substantial waste. There’s generally more waste in early drug development because the processes are less optimized, but as we develop long-term commercial processes, we focus on making the syntheses greener.

That focus is valuable for several reasons. Greener processes lead to an overall reduction in waste, minimizing public health or environmental risks. They are also important because they reduce the costs of goods for manufacture, are more efficient and robust, and give higher quality drug substances.

How do you get a better quality product using green chemistry?

Here’s an example: During early drug development, we had a synthesis process for an active pharmaceutical ingredient for oncology that involved a metal-catalyzed oxidation reaction requiring multiple purifications to meet desired quality. We also had to test for residual trace metals in the final intermediate compound to ensure the levels were below required regulatory limits. To eliminate this issue, we invested in new technology and developed a continuous-flow ozonolysis process to perform the oxidation and carried out the reaction in an aqueous mixture of an environmentally benign solvent. So we eliminated any potential of heavy-metal contamination and came out with a cleaner product.

How do you approach making an existing chemical process green?

Our goal is to develop green, efficient, and economical routes that avoid toxic substances, reduce or reuse solvents or reagents, and replace hazardous solvents and reagents. I’ll give you two examples.

One relates to an early clinical candidate where one of the fragments was made using chiral synthesis, which involved transition-metal catalysts. The process had 12 steps, six chromatographic purifications, and an overall yield of 10%. To produce 1 kg of product, we needed 23 kg of starting material that cost $5,000 a kilo, and the cycle took approximately six months.

So we developed a greener, enzymatic catalysis process to make the same compound. The number of steps went down to 10. We eliminated all the chromatographic purifications, which significantly reduced solvent usage, and we doubled overall yield. Now, to make 1 kg of the product, we use 4.6 kg of a new starting material that costs $10 per kilo, and we reduced the cycle time to one month.

The other example is our recent development of a commercial process to make a treatment for hyperparathyroidism called etelcalcetide, which just got approved in the European Union. It was made using a five-step, solid-state peptide synthesis. Producing 1 kg of peptide required tons of solvent. We got a 30% reduction in solvent use by improving the intermediate isolation and developing a new conjugation process for one of the amino acids. These improvements led to a 40% reduction in operating time to make the final drug substance. 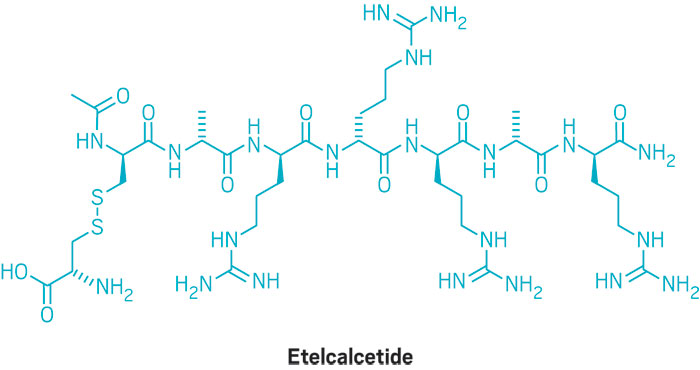 Those are impressive numbers.

It’s night and day! It really shows you the power of making processes greener. The first time you develop a synthetic route, you’re on a critical path and need to accelerate the drug into the clinic, so you develop a scalable but unoptimized process. But later, when you have more time, you turn around and ask yourself, “How do I change that? I really don’t want to use all this material and time and money.”

Did you make any simple changes at Amgen that had a big impact?

There’s a metric that measures the greenness of a synthesis process called the environmental (E) factor, and it relates to kilograms of waste produced per kilogram of product. Instead of writing in paper lab notebooks, scientists in the pharmaceutical industry now use electronic notebooks on their computers. So one thing we did that had a pretty big impact is we built an E-factor metric into our scientists’ e-notebooks. Now, as staff develop a commercial synthesis process, they also get the E-factor metric data in real time. It really made people think about introducing green chemistry principles from the beginning of process development. It’s a win-win for everybody.

What other green technologies did Amgen adopt?

Using supercritical carbon dioxide as a purification technology led to massive reduction in solvent waste and significant improvement in our E factor. Also, a switch to ultraperformance liquid ­chromatography technology as an analytical tool led to shorter run times, which we estimate gave us about a 75% reduction in yearly solvent usage.

Do you see your investments in green chemistry paying off?

Yes, without a doubt. We haven’t had to make big investments, but we’ve changed where we make our investments. We’ve invested in increasing the efficiency, safety, and robustness of our processes. We’ve seen a big financial impact on our manufacturing and operating cost, as well as a societal impact because we’re significantly reducing waste, which obviously has long-term benefit. And we’ve gotten recognition as a company for our effort, which makes all of this very rewarding.

Prachi Patel is a freelance writer. A version of this story first appeared in ACS Central Science: cenm.ag/faul. This interview was edited for length and clarity.

Comments
pankaj kumssr singh (April 7, 2017 4:10 AM)
Thanks Prachi for sharing the wonderfull interview towords the green chemistry application in pharmaceutical industries, i think it is the determination which drive us to make our process greener,safer & cost effetive. I think theses kind of interview encourgaes the scientist to think out of the box
Dr. Margaret has done wonderfull work on green chemistry.
Reply »