Combining two types of light-activated molecular machines, chemists in France have created a system that winds and unwinds polymer chains, resulting in a material that contracts and expands, depending upon the wavelength of light that shines upon it. The system, developed by the University of Strasbourg’s Nicolas Giuseppone and coworkers, could lead to new types of actuators and artificial muscles.

A couple years ago, Giuseppone’s group tethered light-activated motor molecules to polymer chains and observed that they could wind up the polymer with ultraviolet light and make the macroscopic material contract (Nat. Nanotech. 2015, DOI: 10.1038/nnano.2014.315).

But once the polymer was shrunk, nothing more could be done. So the chemists went back to the drawing board and added a light-activated modulator molecule to the system. This modulator unwinds the polymer when exposed to white light and re-expands the material (Nat. Nanotech. 2017, DOI: 10.1038/nnano.2017.28).

“Now we have a way to reset the system,” Giuseppone explains. “We can, in principle, make an actuator at any scale that can go forward and backward, fueled only by light.” UV light activates the motor and twists the polymer chains. White light turns on the modulator, which untwists them.

Chenfeng Ke, an expert in molecular machines at Dartmouth College, likens the system to molecular clockwork: The two molecular machines act cooperatively to keep the system in motion. From a practical standpoint, Ke says, Giuseppone’s system is probably not ready for commercial use, “but the design is very elegant, and it paves the way for scientists to think about how to come up with strategies for building these types of multicomponent systems,” he adds. 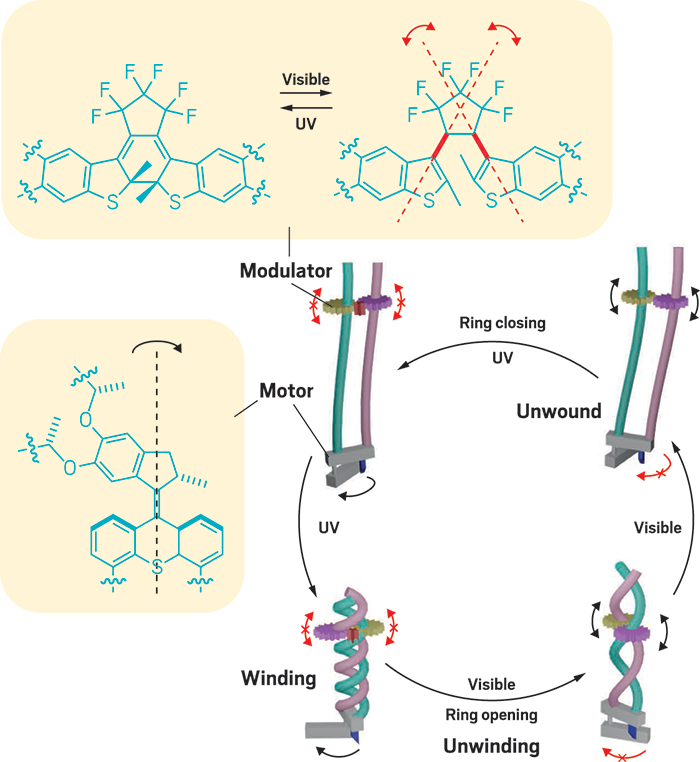 Catalysis
Catalyst chirality switched with a flash of light
Materials
Polymer ribbons undulate and walk in UV light
Molecular Machines
Molecular motor turns rotor
Share X
To send an e-mail to multiple recipients, separate e-mail addresses with a comma, semicolon, or both.
Title: Nanomachines wind and unwind polymers
Author: Bethany Halford
Chemical & Engineering News will not share your email address with any other person or company.