Washington leaders to hasten completion of remediation at Superfund sites

Nearly 40 years ago, a dump oozing chemicals in upstate New York triggered a state of emergency, and Love Canal became synonymous with hazardous waste in the U.S. The toxic site made headlines, and hundreds of families were evacuated from a 10-block area surrounding the canal. The plight of the community led Congress to create a federal program called Superfund that pays for cleanup of contaminated sites.

“Most Americans aren’t aware that there are more than 1,300 Superfund sites across the country,” Environmental Protection Agency Administrator Scott Pruitt tells C&EN in a statement. Some have been on the Superfund list for almost 40 years, he notes. “That’s unacceptable.” 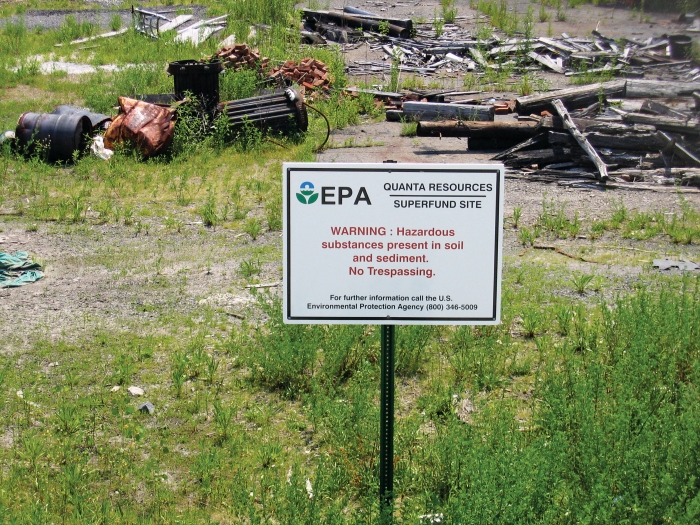 Credit: EPA
One of 114 Superfund sites in New Jersey, former Edgewater manufacturing site Quanta Resources has been on the National Priorities List since 2002.

The 1980 Comprehensive Environmental Response, Compensation & Liability Act, which is commonly referred to as the Superfund law, created a framework for regulating and managing toxic waste sites. The law established liability for companies responsible for hazardous waste contamination. And it levied a tax on chemical and petroleum industries to offset cleanup costs when the firm or companies responsible for the pollution can’t be identified or are no longer in business.

Where are Superfund sites?

As of March, there are 1,337 Superfund sites on EPA’s National Priorities List.
Many of these are clustered in the Northeast, which has a long industrial legacy.

In the decade that followed, EPA prioritized more than 1,000 contaminated sites across the nation for cleanup. Sites have been added and removed, but today, more than 700 of the original sites linger on the agency’s Superfund list, dubbed the National Priorities List.

As of March, that list included 1,337 sites. New Jersey, with 114 areas on the list, leads the nation in Superfund sites. Throughout the U.S., another 53 sites are proposed for addition to the list.

Since the National Priorities List was created in 1982, EPA has cleaned up and removed nearly 400 sites.

Remediating hazardous waste sites is difficult, and cleanup can take years or decades.

For example, contaminated groundwater is typically treated by pumping it to the surface, using technology to strip out pollutants, then returning treated water to the aquifer. Contamination levels fall slowly.

In addition, cleanups are costly and often underfunded. The tax on chemical and petroleum industries that had largely financed Superfund cleanup expired in 1995. Once the levy expired, in cases when a polluter could not be identified, Congress was forced to rely almost entirely on general tax revenue to pay for cleanups. Competition for that revenue meant federal funding for the Superfund program declined by nearly half between 1999 and 2013, from about $2 billion to about $1.1 billion, according to a 2015 report by the Government Accountability Office (GAO).

As funding has fallen, the rate at which EPA has removed sites from its National Priorities List declined, according to GAO. After an uptick in cleanups during the 1990s, by the mid-aughts, the Superfund program was slowing down.

Driven by the slow pace of Superfund cleanups, experts have been studying how to improve the process.

For instance, Michael Kavanaugh, who chaired a National Academies panel that analyzed the challenges of cleaning up contaminated groundwater, suggests a change in the way Superfund is managed long-term. This would involve reprioritizing sites on the National Priorities List based on an “infrastructure approach,” says Kavanaugh, a senior principal environmental engineer at the consulting firm Geosyntec.

Such an approach would align cleanup goals at specific sites with achievable containment strategies that reduce the probability that pollution will leak beyond the site, Kavanaugh explains. It’s similar to how bridges, waterways, and other U.S. infrastructure projects are planned and constructed to withstand potentially damaging events including earthquakes, floods, and hurricanes, he says.

But a substantial challenge to taking this approach, according to Kavanaugh, is language in the Superfund law that requires restoring groundwater to a level that achieves “unlimited use and unrestricted exposure.”

“This is a very difficult goal to achieve at a large number of sites,” Kavanaugh says. He compares this aim with those in the Clean Water Act, which set out to make all waters of the U.S. fishable and swimmable. 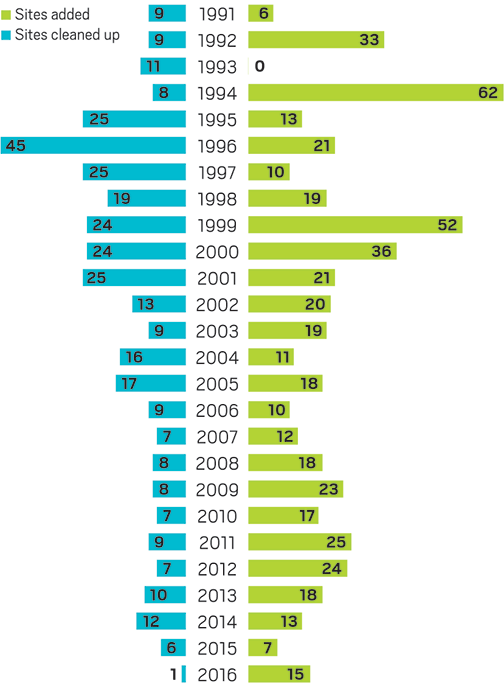 By 1990, some 1,200 hazardous waste sites had been added to the National Priorities List, and only a couple dozen had been cleaned up. Cleanup declined after a surge in the 1990s.
Note: Data for 1982–90 not shown. Source: EPA

“I think all of us working in the field would like to see that goal achieved, but there are limitations,” he says. “Can you achieve this goal of unlimited use and unrestricted exposure in a reasonable time frame and a reasonable cost?”

Kavanaugh calls for assessing the risks and benefits of containing and managing groundwater contamination in the long term versus continuing remediation until a site is completely restored.

The idea, though, could prove a hard sell to people who live near Superfund sites.

Some leaders in Washington, D.C., concerned about public health and economic development in their own districts, have criticized the pace of Superfund cleanups.

“I want to see these sites get cleaned up faster,” says Pruitt, who took the helm at EPA in February. Pruitt says he has directed the agency’s Office of Land & Emergency Management to target Superfund for improvement.

Superfund by the numbers

▸ 37: years since the Superfund law was enacted
▸ 1,337: sites on the National Priorities List as of March
▸ 50%: proportion of people in New Jersey who live within 5 km of a Superfund site
▸ $762 million: the White House’s proposed fiscal 2018 budget for Superfund, a 30% cut from 2017

States with the most sites on the National Priorities List:

In Congress, New Jersey Rep. Frank Pallone Jr. (D) says Superfund cleanup should be part of a broader public investment in infrastructure across the U.S. Half of the population of Pallone’s state lived within 5 km of a Superfund site in 2013, according to GAO.

“As the federal government has pulled back infrastructure funding in recent years, the backlog of infrastructure repairs and replacement has grown, and so has the price tag to address it,” Pallone said at a February hearing in the U.S. House of Representatives. “Delaying Superfund cleanups while contaminants spread in the environment costs more than quickly containing and addressing pollution. In the long run, we’re not saving money by ignoring the problem.”

Though President Donald J. Trump emphasized infrastructure improvements during his campaign, the White House’s recent budget proposal for fiscal 2018 would reduce support for Superfund to $762 million. That would represent a decrease of $330 million, or 30%, from the 2017 level provided by a stopgap funding law that expires later this month. If Congress goes along with Trump’s plan, federal divestment from the Superfund program could leave states with the prospect of picking up a larger portion of the cleanup tab in the absence of a liable company to foot the bill.

Pallone, meanwhile, calls for more public monies for Superfund. “When more funding is available, these cleanups can be done more quickly and more efficiently, which is so important to the communities around the Superfund sites.”

Scientists and engineers are working on new methods for remediating hazardous waste sites through a federal research funding program.

The National Institute of Environ- mental Health Sciences funds 18 university-led Superfund research centers across the country. The program, which is getting about $77 million in 2017 under a stopgap funding law, was created in 1987 to advance basic environmental research in support of the Environmental Protection Agency’s Superfund work.

One of those programs is in Rhode Island, which is home to 12 active Superfund sites.

“It’s a small place, and we have a long industrial legacy,” explains Robert H. Hurt, an engineering professor at Brown University. He directs Brown’s Superfund Research Program, which supports cleanup efforts at sites in Rhode Island that have complex mixtures of contaminants.

Hurt and his colleagues are developing biomarkers for exposure to trichloroethylene, an industrial solvent found at many Superfund sites. They are also working on nanomaterial barriers to protect against vapor intrusion, which occurs when volatile organic compounds migrate into buildings from contaminated soil below the structures.

Chemicals frequently found at Su- perfund sites nationwide include volatile organic compounds, such as trichloroethylene; metals, such as arsenic; polycyclic aromatic hydrocarbons, such as 2-methylnaphthalene; and pesticides, including DDT, which the U.S. banned in 1972 but persists in the environment.