Catching up on ketchup 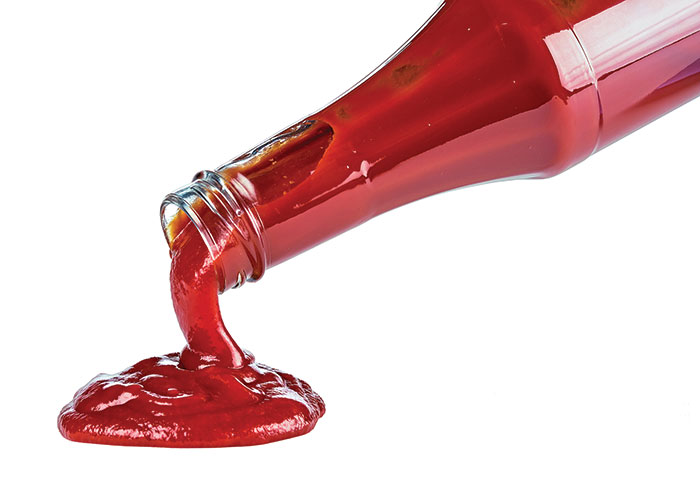 Much easier way to dispense stubborn ketchup. Remove the cap, tilt the bottle approximately 45°, and tap the raised “57” on the lower part of the neck on your opposite hand. Preferably the large knuckle that attaches the index finger to your hand. If you don’t use the “57” brand, it works just as well with other brands. Tap in the same location. Much more control and no dealing with a messy cap that’s covered in ketchup. Squeeze bottles need not apply. Also, notice on the label in restaurants that it usually says “Restaurant pack.” This means a slightly watered-down version of home ketchup. Should be easier to dispense in a restaurant than at home.

The Catsup Bottle, by Ogden Nash First a little Then a lottle

Going to Extremes, by Richard Willard Armour Shake and shake The catsup bottle. None’ll come— And then a lot’ll.

It seems that the Nash poem was first in time (as far as I can find out), and the poem by Armour was written shortly after Nash’s. My spell-checker has apparently never read the Nash poem, as I had to work hard to get it not to change “lottle” to “little”!

Maybe you didn’t realize such yield-stress fluids are known as non-Newtonian fluids. They have interesting traits and uses.

Spinning a small dowel (think pencil if you still have access to one) in a Newtonian fluid will create a region around the dowel devoid of liquid. Spin one in ketchup, and the ketchup will climb up the dowel.

Practical use: Additive for aircraft fuel as a safety component. In case of crash, regular fuel can create a fine dispersed mist, which is highly flammable and possibly explosive. But adding a polymer that acts as an antimister enables “safer” crashes. (Helo shot-down casualties in Vietnam frequently involved “survivable” crashes but for rapid fuel fire involvement.) The key requirement for the fuel is that it must still function as a fuel in engines. Do it right, and the fuel flow dynamics acts as a high sheer (yield stress) environment, allowing fuel flow to the engine to proceed as normal.

March 13, page 44: In the pharma outsourcing cover story, case study #3, the structure of the tetrahydrocannabinol-valine-dicarboxylate derivative shown is the hemimalonate, rather than the hemisuccinate as intended. The structure is missing one methylene in the side chain.

April 3, page 11: In the science concentrate about making pentanediol from biomass, the final structures in the reaction scheme were short one carbon atom, showing 1,4-butanediol rather than 1,5-pentanediol.

Pollution
Mercury makes it deep into marine trenches
Sustainability
US Senate passes sustainable chemistry legislation
Environment
P2 and ADM pair up for renewable products
Share X
To send an e-mail to multiple recipients, separate e-mail addresses with a comma, semicolon, or both.
Title: Catching up on ketchup
Author:
Chemical & Engineering News will not share your email address with any other person or company.