Minerals formed due to people’s activity may mark Anthropocene epoch

by Ryan Cross, special to C&EN 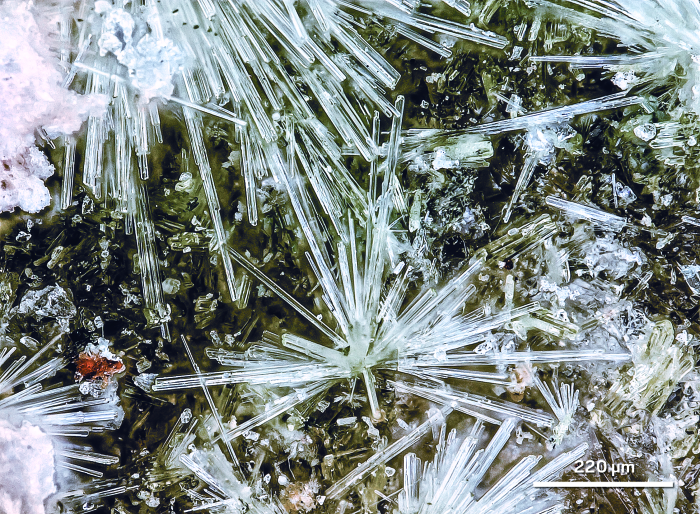 Credit: Anthony Kampf
Bluelizardite [Na7(UO2)(SO4)4Cl·2H2O] has been found only in the Blue Lizard Mine in Utah.

The latest evidence that people are refashioning Earth is written not in the sky, where carbon dioxide levels are rising, nor in the acidifying ocean, but in stone. Geologists have identified about 200 minerals that formed due to the hustle and bustle of human activity. Many of these unintentionally formed minerals appeared on Earth during the past two centuries, a blip in the timescale of thousands to millions of years that geologists typically work with.

“It is happening in a geologic instant, in the blink of an eye,” says Robert M. Hazen from the Geophysical Laboratory at the Carnegie Institution for Science. Hazen led a research team that cataloged the human-influenced minerals last month (Am. Mineral. 2017, DOI: 10.2138/am-2017-5875).

The uptick in mineral diversity is more than just an expanded checklist for rock hounds. To Hazen and colleagues, it grants further credence to the notion that humans have driven Earth into a new unit of geologic time: the Anthropocene epoch.

The epoch comes after geological times such as the Plesiteocene epoch or the Jurassic period left their identifying marks in Earth’s sediment. And “there will be a distinctive, pervasive, and very diagnostic layer that makes our time different from any other time in Earth’s history,” Hazen contends.

This argument has made his new paper the target of both praise and derision among professional geologists. The Anthropocene epoch is a proposed—but not yet official—unit of geologic time that would mark an end to the Holocene—the current epoch that began about 12,000 years ago after the last ice age ended. 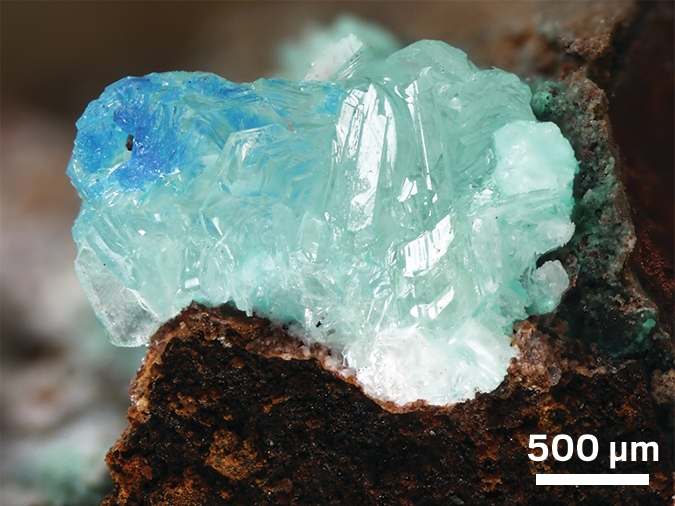 Credit: RRUFF
A simonkolleite [Zn5(OH)8Cl2·H2O] sample was discovered on a piece of copper ore from a mine in Maricopa County, Ariz.

One proposed start time for the Anthropocene is the mid-19th century, linked to the Industrial Revolution and increasing levels of atmospheric CO2. Another potential start date is 1950, when nuclear weapons testing began depositing isotopic markers.

Scientists called stratigraphers study the layers of rock from eons past and divide the geologic record into segments based on observed changes. Many proponents of formalizing an Anthropocene epoch point to warming oceans, a changing atmosphere, or human-catalyzed extinctions as justification for adding a new epoch to the record. But Hazen says those markers might not be evident to future geologists. Minerals, on the other hand, can persist for billions of years.

Hazen’s team began probing records of all 5,200-some minerals recognized by the International Mineralogical Association. “I was struck by how many were listed as primarily, or in some cases, exclusively, formed because of human activity,” he says.

That’s remarkable because by definition, minerals are ordered, inorganic structures that form naturally, without human intervention. Hazen’s paper shows that the “natural” requirement may be up for interpretation. Several of the 208 human-influenced minerals Hazen and his team identified grew atop objects that people crafted, such as bronze and tin artifacts, a Hellenistic-era shipwreck, and ancient sacrificial altars. Thus, as Hazen puts it, human activity “mediated” these minerals’ formation even though they grew on their own.

“We are inadvertently forming new minerals all the time,” says Marcus J. Origlieri, a coauthor on Hazen’s paper and an expert on rare minerals at the University of Arizona. Origlieri notes that many of the 208 minerals were only recently discovered in mining tunnels and smelters left over from Cold War-era uranium extraction and processing.

“Because the mines have been sitting idle without any forced airflow, the humidity conditions are probably ripe for some of these things to form that wouldn’t have formed otherwise,” says Anthony R. Kampf, a curator emeritus at the Natural History Museum of Los Angeles County. He identified more than two dozen of the minerals on Hazen’s list.

There’s a caveat to using those minerals to demarcate the Anthropocene, though.

“Many of these minerals will not stick around,” Kampf says, explaining that several are highly hydrated, so they fall apart under low humidity and dissolve if too wet. “But it is intriguing to find them because they tell us something about nature,” he adds. 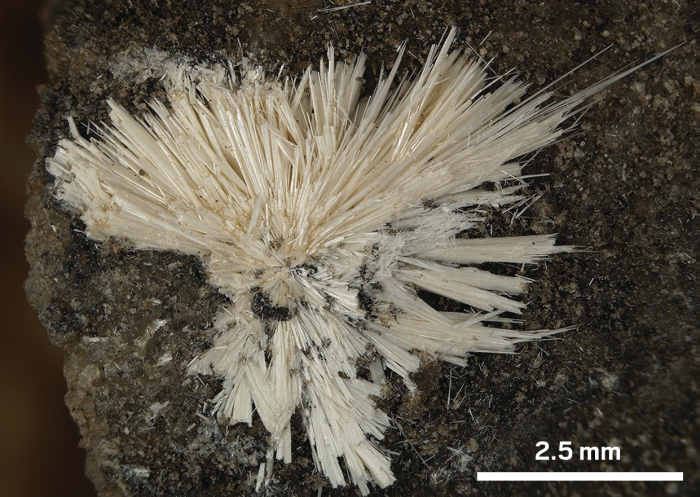 For instance, Kampf was surprised to identify new minerals on mine tunnel walls sporting previously unknown polyoxometalate structures. Polyoxometalates, a type of transition-metal framework material used to oxidize molecules in organic synthesis, are stable in the appropriate solution, but as crystalline minerals, they fall apart unless kept at a specific humidity (Can. Mineral. 2016, DOI: 10.3749/canmin.1500062).

Furthermore, the 208 minerals that Hazen outlines are extremely rare. Some have been found only in a single location. Bluelizardite, for instance, came from the Blue Lizard Mine in San Juan County, Utah, which once produced copper and uranium ores. Hazen acknowledges that such minerals “are not likely to be the things that geologists of the future will find.”

Peter J. Heaney, a mineralogist at Pennsylvania State University, agrees that nonmineral markers may be more practical, although they are outside the domain of most geologists’ interest. Heaney applauds Hazen’s group for “trying to abide by the rules of the game” in using the 208 human-mediated minerals to get mineralogists discussing the Anthropocene. Hypotheticals about future geologists studying flattened buildings and roads in rock strata don’t sit well with all scientists, though.

“Geologists don’t talk about the future,” says Lucy E. Edwards of the U.S. Geological Survey. “That is a dead giveaway that you are not talking about geology.”

Edwards adds, “It was a good paper for showing that we’ve totally blurred what is human-made versus naturally occurring.” But as for the argument that such minerals support a geological concept of the Anthropocene, “I didn’t see that in the data.” 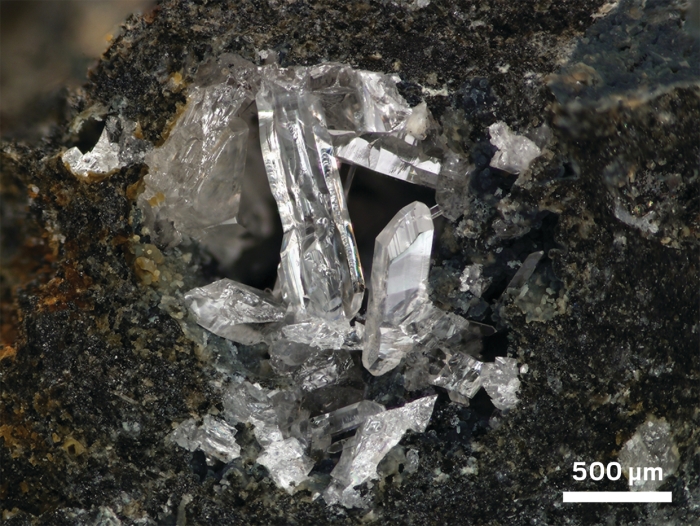 Credit: RRUFF
Fiedlerite [Pb3Cl4F(OH)·H2O] was discovered at the Lavrion District slags in Greece.

That’s why the second part of Hazen’s paper argues that more abundant human-created materials such as cement, plaster, porcelain, and brick, as well as alloys such as bronze, brass, and steel, would serve as more practical markers of the Anthropocene. These substances, which the authors note contain polycrystalline components but are synthetic, would represent the most identifiable hallmark of the Anthropocene were they to become buried in sediment.

Stan C. Finney, a stratigrapher at California State University, Long Beach, agrees. The study “is just jumping on a bandwagon,” he says. “We don’t use the geologic timescale anymore to record geologic events. We only need it now for historical time periods.”

For example, modern volcanic eruptions and lava flows are dated to the days they begin and end. Finney and Edwards have both questioned the Anthropocene’s usefulness to geologists and have suggested it may be more of a political statement than a scientific ruling (GSA Today 2015, DOI: 10.1130/GSATG270A.1). 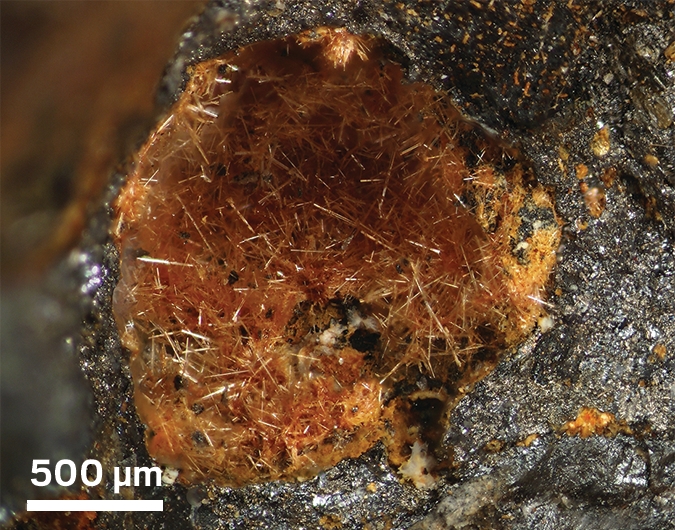 Credit: RRUFF
Nealite [Pb4Fe(AsO3)2Cl4·2H2O] was recovered from the Lavrion District slags in Greece.

Others are more supportive. “A paper like this is more than an intellectual exercise,” says Jan Zalasiewicz, a geologist at the University of Leicester. “It is helping describe how our planet is currently, and rapidly, evolving into a state which has no analog in Earth’s geological past.”

Despite the popularization of the Anthropocene as a concept, it has a long way to go before receiving official recognition from geologists. Zalasiewicz chairs the Working Group on the Anthropocene, a committee compiling data that recently voted to move forward in support of formalizing the new epoch. That decision ultimately lies in the concurring votes of the Subcommission on Quaternary Stratigraphy, the International Commission on Stratigraphy (which Finney previously chaired for eight years), and the International Union of Geological Sciences (for which Finney now serves as secretary general).

Hazen says the legitimacy of the Anthropocene boils down to a simple question: “Is there something about the geological environment of our age that differs from anything that came before? From a mineralogical point of view, the answer is unambiguously yes.”

Whether the human-mediated minerals will help tip the balance in favor of an Anthropocene epoch remains to be seen. But one thing is clear: They are of endless forms most beautiful, albeit unintentionally made.

Ryan Cross is a freelance science writer in Washington, D.C.