At big IHS Markit chemical conference in Houston, companies heard that their profits should remain strong despite building in the U.S. 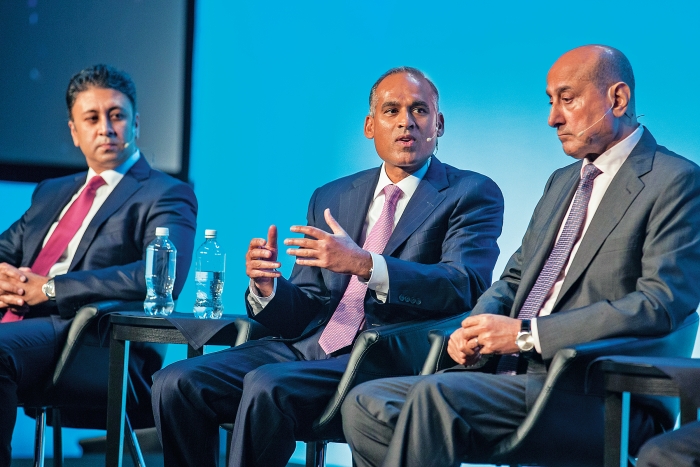 But presenters at World Petrochemical Conference 2017 by IHS Markit, held last month in Houston, were upbeat. The 1,400 attendees at the event, the largest of its kind in the world, heard that demand is ample and that petrochemical profits should remain strong, especially in the U.S., where natural gas prices should remain relatively low for decades.

The troubles that U.S. chemical executives admitted to were mundane. An often heard complaint was that the domestic transportation infrastructure may be unprepared for all the additional output from new U.S. plants.

The rest of the world’s petrochemical companies, meanwhile, are regrouping. They have seen U.S. rivals eclipse them in the past decade and are looking to cut costs or acquire cheap feedstocks of their own.

Energy markets will stay in North America’s favor for a long time, presenters said. Petrochemical makers in the U.S. get most of their raw materials, notably ethane, from natural gas, which increasingly is extracted from low-cost shale formations. Other regions such as Asia and Europe primarily use oil-derived naphtha as a starting point.

Kurt Barrow, vice president of oil markets, midstream, and downstream for IHS Markit, sees a lot of good news for the U.S. He explained that oil prices stopped their descent last November when the Organization of the Petroleum Exporting Countries announced production cuts. The subsequent climb in prices induced U.S. oil companies to double drilling activity and put more oil on the market.

But in the long term, energy markets should gradually tighten. Barrow forecasts that oil will remain around $50 per barrel for the rest of the year and then steadily climb to about $80 per barrel by 2020.

The U.S., meanwhile, is still sitting on a vast resource of cheap shale gas. Barrow thinks U.S. natural gas prices should range between $3.00 and $4.00 per million Btu “for the foreseeable decades.” At those low levels, natural gas will be attractive versus oil on an energy-content basis as long as oil remains above $30 per barrel. 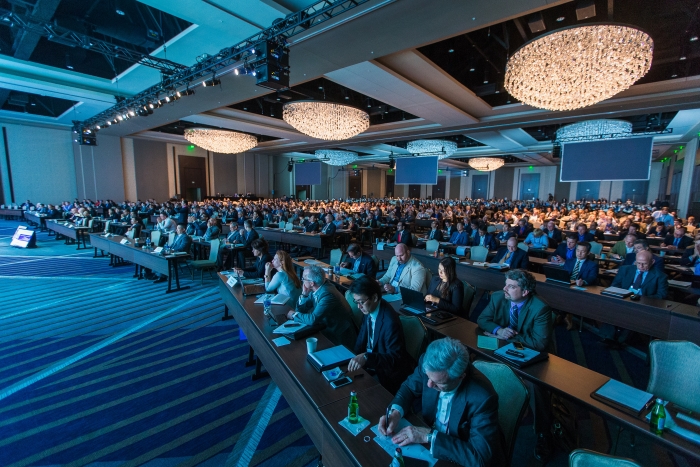 Credit: Barron & Barron Photography
At 1,400 attendees, the IHS Markit World Petrochemical Conference was the largest ever.

Analysts speaking at the conference had plenty of news that petrochemical makers all over the world didn’t mind hearing. Despite all the investment in basic chemicals and plastics in the U.S., not much construction is occurring elsewhere, noted Dave Witte, senior vice president and general manager of oil markets, midstream, downstream, and chemicals at IHS Markit. Even China is seeing capital investment level off.

Thus, profitability for chemical companies should improve because new capacity won’t keep up with the 4% annual growth in demand for basic chemicals.

This was acutely the case last year for ethylene, the most important petrochemical commodity. Steve Lewandowski, senior director of global olefins at IHS Markit, said ethylene plant operating rates, at approximately 90% around the world, were as high as owners could crank them. Profits were very high. “If anybody could have made more ethylene, they would have because margins were so strong,” he said.

Lewandowski does see a trough coming for ethylene, but it won’t be very long or deep. In 2017 and 2018, the world will add more production capacity—more than 7 million metric tons per year in the U.S. alone—than demand will grow. Operating rates will decline to about 87%, the same level they were in 2014.

But 2014 was a profitable year for petrochemical makers, Lewandowski pointed out. And come 2019, demand will exceed supply again. By 2021, operating rates should climb back to the prosperous levels of 2016.

Of course, demand will need to hold up to absorb all the capacity. Bob Patel, chief executive officer of the big petrochemical maker LyondellBasell Industries, argued that it will. He is particularly confident in the outlook for two of his company’s key products: polyethylene and polypropylene.

“Polyolefin demand continues to grow at 4 to 5% per year,” Patel said. “That is really led by the emerging middle class in places like China and India.”

Because such plastics are used in bags, food packaging, and other nondurable applications, Patel figures they are nearly recession proof. In the past 25 years, he pointed out, demand for these products declined only once, in 2008.

But Patel cautioned that scenarios in petrochemicals can change in surprising ways. For instance, during the first quarter of this year, it was actually cheaper in the U.S. to make petrochemicals from naphtha than it was from ethane. Naphtha yields coproducts such as propylene and butadiene, which have been enjoying healthy enough prices to offset the higher cost of naphtha.

Mutlaq H. Al-Morished, CEO of the Saudi Arabian chemical maker Tasnee, knows about change in petrochemicals. He has seen fortunes reverse in the Middle East. In the 2000s, Saudi Arabia was selling ethane at 75 cents per million Btu, a small fraction of the going rate in the U.S. The region kept building plants until about 2008, when new ethane sources were exhausted.

“After that, the gas was spoken for and things slowed down,” Al-Morished said. Then in 2016, the Saudi government raised ethane prices to $1.75. At that level, variables such as shipping and capital costs eat away at any price advantage versus the U.S.

Watching its profits fall by half in recent years, Tasnee had to do something unfamiliar to Middle Eastern chemical producers: cut costs. It laid off workers and closed production lines. In February, the firm agreed to merge its titanium dioxide business, Cristal, with rival Tronox. “We squeeze every dollar from our business,” Al-Morished said, noting that other Middle Eastern companies will likely follow Tasnee’s example.

Ineos Director Tom Crotty gave his thoughts on what Europe should do in response to the disadvantages the region has against the U.S. and the Middle East. “In a way, you can think of Europe almost as the old man of the industry that has been beat up by every corner of the globe,” he said.

European chemical companies ought to consolidate and shutter uneconomical facilities, Crotty argued. He noted that Ineos has done its part by creating the Inovyn polyvinyl chloride business and by forming Styrolution through a buyout of BASF’s styrenic resins unit.

But Europe can do more, Crotty said. “We need to do something about our feedstocks and our energy base.”

Faced with dwindling supplies of ethane from the North Sea and 40% operating rates at its Grangemouth, Scotland, cracker, Ineos began importing ethane from U.S. shale fields. The company is also starting to explore for shale gas in the U.K. and will commence test drilling later this year.

The U.S. may be the envy of the petrochemical world now, but it shouldn’t grow complacent. A few presenters criticized the ability of the country’s infrastructure to handle surging petrochemical output.

Mark E. Lashier, vice president of commercial operations at Chevron Phillips Chemical, highlighted port congestion. The U.S. will triple exports of polyethylene by 2026 to about 10 million metric tons per year. Export volumes at Gulf Coast ports such as Mobile, Ala., and the Houston Ship Channel will also triple.

Chevron Phillips, which is completing a $6 billion ethylene cracker and polyethylene plant in Texas, has spent more than $500 million on logistics. The firm acquired 3,000 new hopper cars. It established packaging facilities in Charleston, S.C., and Fort Worth to circumvent the busy Houston port.

Karen McKee, vice president of global basic chemicals for ExxonMobil Chemical, voiced similar concerns. “A decade ago, we wouldn’t have anticipated that we would have the huge export hub on the Gulf Coast,” she told a luncheon audience. “One of the challenges that we have here in Houston is that we don’t have any heavy haul roads.” So chemical firms must load containers at less than full capacity for shipment overseas.

Rail has been another problem for U.S. chemical makers. Marguerite Morrin, senior director of chlor-alkali and soda ash at IHS Markit, noted in her presentation that the cost of shipping soda ash from Turkey to the U.S. East Coast is $40 per metric ton, much less than the $120 per metric ton railroads charge to ship soda ash from Wyoming mines to the same location.

Although logistics were historically a strong point for the U.S., infrastructure is now crumbling and needs to be fixed, Lashier warned. “We can ruin some of the advantage that shale offers us if we have an infrastructure roadblock,” he said.

Business
Ethane supplier to the world
Business
Volatility returns to petrochemicals
Business
Chemical Producers Still Standing After Oil Price Drop
Share X
To send an e-mail to multiple recipients, separate e-mail addresses with a comma, semicolon, or both.
Title: A promising petrochemical prognosis
Author: Alexander H. Tullo
Chemical & Engineering News will not share your email address with any other person or company.