After March for Science, is a run for office next?

[+]Enlarge
Credit: Terri Fowler/Everlasting Photography
Martin congratulates Combs Elementary School, which is in his district, for earning a Magnet School of Excellence Award from Magnet Schools of America. 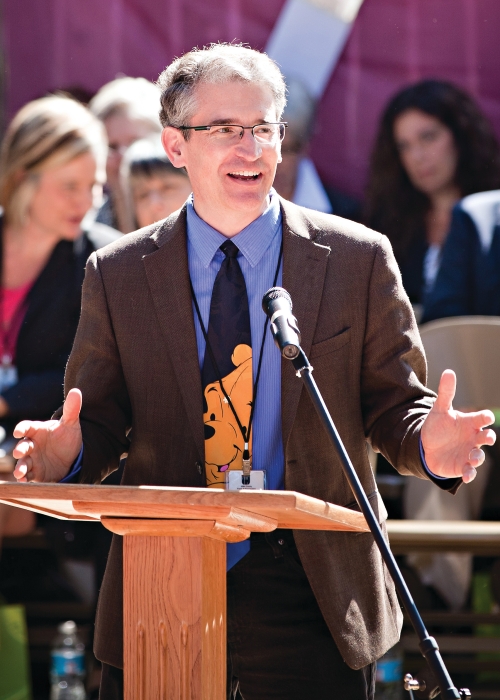 Credit: Terri Fowler/Everlasting Photography
Martin congratulates Combs Elementary School, which is in his district, for earning a Magnet School of Excellence Award from Magnet Schools of America.

Consternation that some U.S. policymakers seem to have little use for research and disdain evidence-based policy decisions drove scientists to organize this weekend’s March for Science. Tens of thousands of people are expected to take to the streets on April 22 to show the world—including politicians—their support for science.

Other scientists spurred to action by the current political climate may be looking past the demonstrations to consider a run for public office. To them, North Carolina State University chemistry professor James D. Martin says: “Give it a try!”

Martin grew up in a family culture in which political engagement was not valued, he says. But he adopted another view 20 years ago when he started his faculty position.

“I quickly realized that politicians were making decisions that impacted my life and career,” he says. “They could control the class size that I’d have to teach and what supplies I had available for research and teaching.” Martin started going to town meetings and other events to get to know his elected officials.

“What I found were a lot of very well-meaning people who had zero experience in science and only a little bit more experience in education,” he says. “Yet so many decisions elected officials need to make require an understanding of science and education.”

Considering a run for public office?

Here are five questions to consider.

1. Do you understand the difference between governing and managing?

“When there are events that inspire people to run, they have that particular issue that they want to solve,” Martin says. “But where we get into the biggest problems is when governing bodies try to be managing bodies, such as ordering someone to be fired.” Governing means setting big-picture policy, not making operational decisions.

Be realistic about the time you can commit. People think they can spend only 10 to 15 hours per week to run for Congress, but “it’s a full-time job,” Naughton says. Targeting a local position might be a better way to get started.

3. Are you willing to raise money?

People may grumble that there should be less money involved in politics, but the current reality is that candidates spend most of their time asking people to donate. It cost Martin $12,500 to design, print, and send five mailings to only 5,000 out of 68,000 voters in his district when he was running for his county’s board of education.

4. Can you listen and communicate well?

A successful run for public office means being a good listener and translating complicated issues for a general audience, in both one-on-one conversations and large groups. “Giving a political speech is very different from giving a technical presentation, but it’s something you can learn,” Naughton says. The key is to distill the message so that you’re able to be honest while avoiding overwhelming voters with detail.

Politicians must have a high tolerance for disagreement. “That’s not unfamiliar to scientists, but some handle it better than others,” says Andrew Rosenberg, director of the Union of Concerned Scientists’ Center for Science & Democracy. Politicians also have to be comfortable with the fact that some people will be unhappy with any particular decision, regardless of how carefully and thoughtfully it’s made.

He started thinking that he might run for office one day, probably after his two children were in college.

Then his county board of education experienced what Martin calls a “hyperideological takeover.” The board made a number of controversial decisions, notably reversing policies that promoted socioeconomic diversity. The move made national news and was ridiculed on television news comedy show “The Colbert Report” as “disintegration.” Martin’s children, then in grades six and nine, felt the effects firsthand in their schools, he says. “Finally, my kids said, ‘Dad, you need to run’ ” for a seat on the school board, he says.

So he did, with his wife as his campaign manager. “It was one of the most difficult things I’ve ever done in my life,” Martin says. A self-described introvert, he had to force himself to go out to knock on doors on weekends.

Ultimately, though, he found it to be a positive experience. “In running for office, you’re kind of forced to talk about taboo subjects like politics, money, and religion with complete strangers,” he says. “But when you do cross that taboo line and have a rational, reasonable conversation where both people are listening and sharing ideas, then it becomes very rewarding,” he says.

Martin won that first election in 2011 and was reelected in 2016, when he ran unopposed. The chemistry professor is now in his sixth year on the Wake County Board of Education. The nine-member board oversees a budget of $1.4 billion, serving 160,000 students taught by 10,225 teachers in 177 schools. The school district now uses what it calls student achievement, which includes minimizing concentrations of poverty and of low-performing students, as one of four criteria for assigning students to schools.

Scientists, including Martin, bring key skills to public office, says Rush D. Holt, chief executive officer of the American Association for the Advancement of Science. Those skills are not so much their specific scientific expertise but their willingness and aptitude for dealing with technical matters, says Holt, a member of the board of directors for scientific advocacy group Research!America and a former U.S. congressperson from New Jersey. They also recognize what science can bring to an issue that nonscientists won’t necessarily realize.

Election reform is an example of such an issue. “No one thinks of that as a science issue,” Holt says. But administrators who oversee elections could benefit by consulting computer scientists in areas such as drawing representative districts and improving security of electronic voting.

Another skill that scientists bring to the governing table is the ability to evaluate data. “I’m often called the data monster,” Martin says. “I will take performance, demographic, and other data and analyze or present it the same way I do science data.”

Martin adds, “I read policy material like I read a paper I’m reviewing,” looking for sound arguments or holes in reasoning. And he tackles policy problems similarly to the way he approaches scientific ones—by bringing together an interdisciplinary team. For instance, to address concerns about arrests of students, he sought input from child advocates and police officers.

“We benefit by having diversity of experience in government,” agrees Shaughnessy Naughton, who has a bachelor’s degree in chemistry. After an unsuccessful run in Pennsylvania for U.S. Congress, she founded the liberal-leaning group 314 Action. The organization advocates for election of candidates from the science, technology, engineering, and math fields to public office as well as fact-driven policy and action to address concerns such as climate change.

“Right now there are very few people with any sort of scientific background in government,” she continues. “You see that reflected in cuts to research funding and mocking of basic research. There’s a saying, ‘If you’re not at the table, you’re on the menu.’ ”

For his part, Martin is considering a bid for higher office. He weighed a run for the North Carolina Senate in 2014. The legislature is part-time and he lives in Raleigh, North Carolina’s capital city.

Although he had the support of his department chair and dean, the university chancellor would’ve required Martin to take a leave of absence when the state general assembly was in session. With a child in college, “I couldn’t afford it,” he says. So he’s biding his time for a few more years.

Naughton offers this insight to chemists considering a run for office: “If you’ve survived p-chem and organic, you can do it. Just bring your passion and work ethic to it.” She adds, “It’s not a great mystery how to campaign, it’s just a lot of work.”

And for chemists and other scientists who opt to stay out of public politics, she says, “You need to vote, and you need to vote in every election.”

Policy
Scientists hit the campaign trail
Policy
C&EN Talks With Shaughnessy Naughton
Environment
Political Action Group Backs Science
Share X
To send an e-mail to multiple recipients, separate e-mail addresses with a comma, semicolon, or both.
Title: After March for Science, is a run for office next?
Author: Jyllian Kemsley
Chemical & Engineering News will not share your email address with any other person or company.