Firing up the NMR 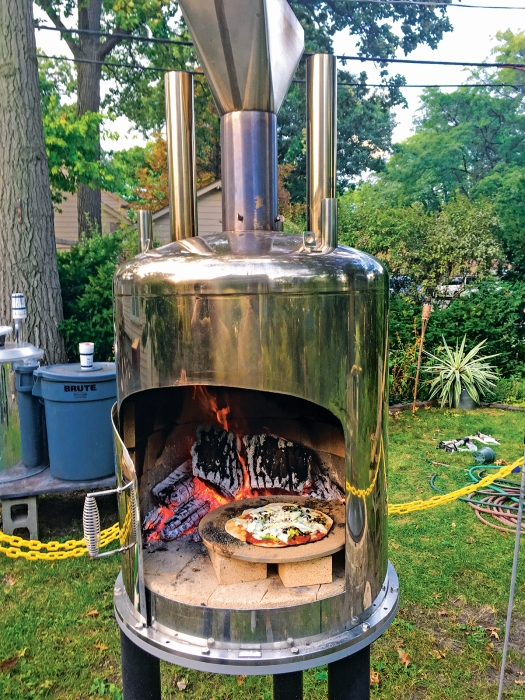 Credit: Rich Haack
Haack’s hack: Repurposed spectrometer is the life of the party.

Back in 1984, when Rich Haack first laid eyes on a high-field nuclear magnetic resonance spectrometer, he had a vision for the instrument that went beyond analyzing chemical compounds. “I thought if you could hollow it out, it would make a neat smoker, outdoor oven, or fire pit,” he tells Newscripts.

Would that make it an NMR-B-Q ? Haack, a chemist who works in industry, never gave up on the idea. He just thought he would never get his hands on an NMR to hack.

That all changed two years ago when he had the opportunity to acquire a defunct 400-MHz instrument from Open Technologies, a company that buys, sells, and services NMRs. Don Frank, the company’s chief executive officer, says the instrument was going to be scrapped. He knew of Haack’s plans, so he drove the old NMR from Open Technologies’ warehouse in Indiana to Haack’s home in Skokie, Ill.—a trip that takes just under three hours. Frank didn’t charge Haack for the obsolete instrument, but Haack treated Frank to lunch and a case of beer.

Haack then spent two weeks taking the instrument apart. He originally thought he’d turn the NMR’s outer vacuum jacket into a smoker, but he realized it would take a massive amount of meat to fill the thing—something he was unlikely to do frequently. So he decided to turn it into a combination pizza oven and fire pit. He taught himself to weld, which he says was “actually not a big deal.” He made some modifications, including attaching a chimney—a salvaged piece of scrap from a portable fume hood—to the center of the jacket, where a scientist would place a sample in a working NMR.

As for the instrument’s internal helium dewar, Haack turned that into a charcoal grill. And he donated the NMR’s superconducting magnet to Loyola University Chicago to use as a teaching tool.

The grill still needs some finishing touches, such as a handle. But the pizza oven and fire pit combo has been a tremendous success.

“At night if I’ve got a good fire roaring in it, flames shoot out of the small tubes on top where the nitrogen and the helium were introduced when it was functional,” he says.

[+]Enlarge
Credit: Nathan Pryor
“Aha!” moment: Bright ideas are sure to arrive when reading with the Laboratory Lamp. 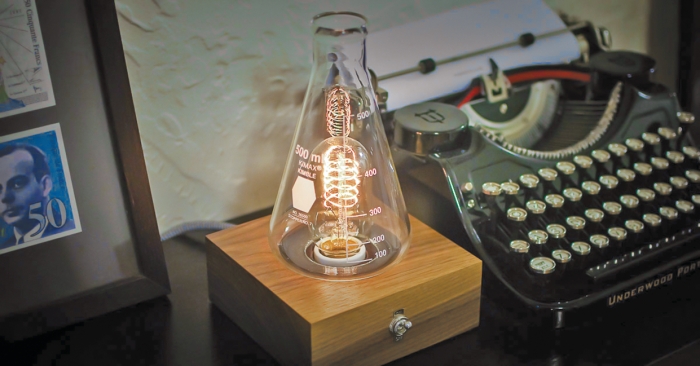 Credit: Nathan Pryor
“Aha!” moment: Bright ideas are sure to arrive when reading with the Laboratory Lamp.

If Haack’s handiwork ignites your do-it-yourself spirit, but you think you might have trouble finding an NMR, the Newscripts gang has found an alternative illumination project: the Laboratory Lamp.

Dreamed up by Nathan Pryor, a designer and software developer based in Vancouver, Wash., the lamp features an Edison bulb inside an Erlenmeyer flask atop a wooden base designed to look like a hot plate. Pryor (who once famously turned a pumpkin into a working game of Tetris) writes on his website, hahabird.com, that he wanted to use the flask “to create an item of functional decor, and what better for that than a lamp, with the relationship between the light bulb and the ‘aha!’ of an idea?”

Pryor details the lamp’s construction, complete with step-by-step photos, on his website. He tells Newscripts the toughest part was cutting the hole in the bottom of the Erlenmeyer flask—he broke a few before getting it just right. For folks who don’t have easy access to a drill press or who don’t want to deal with glass chips, Pryor also sells the lamp at his HaHaBird Etsy shop for $195.

Science Communication
Book covers and Disney characters—there’s a periodic table for everything
Graduate Education
International students in US cannot take classes online only
Undergraduate Education
COVID-19 shakes up summer internship and research opportunities
Share X
To send an e-mail to multiple recipients, separate e-mail addresses with a comma, semicolon, or both.
Title: Bright ideas for repurposing lab equipment
Author: Bethany Halford
Chemical & Engineering News will not share your email address with any other person or company.

Comments
Komatsu, Tokutaro (May 1, 2017 10:38 PM)
The news gave me an idea that a Dimroth condenser may be turned into a cool neon lump.
Reply »