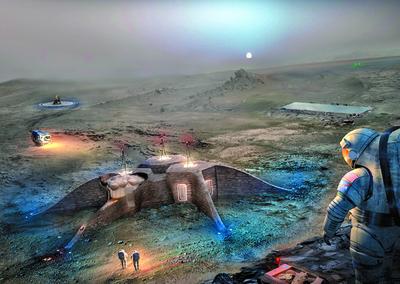 Credit: ThalesNano
In this artist’s rendition, an astronaut looks out over a space colony on Mars.

Despite the success of remote-controlled robotic spacecraft, humans are continuing their quest to explore space up close and in person. For example, the U.S. government is funding NASA’s Journey to Mars program, which aims to send humans to Mars in the 2030s. SpaceX founder Elon Musk also recently announced plans to develop spacecraft that could transport people to and from the Red Planet.

But the care and feeding of live people on long space flights, or on planets such as Mars, will require enormous engineering and scientific ingenuity and advances. Many of these developments will hinge on chemistry, according to a group of scientists who are hoping to bring the central science to the forefront of human space flight efforts.

Some of the needs of humans in space are predictable, including technologies that can recirculate oxygen and deal with waste products. But it’s impossible to plan for every malfunction or mishap. A space traveler might develop gout or break a leg; mechanical parts on a spacecraft or in colony buildings might break or warp. Humans will need to synthesize any number of medications or materials in a low-gravity environment to take care of these problems.

Traditional chemical synthesis methodologies clearly won’t work in space. Spacecraft can’t accommodate the room or weight of the supplies that would be needed to perform every anticipated chemical reaction. And the corrosive reagents or liquid-filled beakers used in traditional labs couldn’t be contained in a weightless environment.

The field of flow chemistry, however, in which reactants are mixed in flowing streams inside sealed reactors, may be ideally suited for space settings, scientists said during the symposium, sponsored by the society’s Younger Chemists Committee.

The field of flow chemistry, in which reactants are mixed in flowing streams inside sealed reactors, may be ideally suited for space settings.

The development of chemistry for use in human space travel and colonization is so important, symposium organizers say, that they are undertaking an effort to form a new ACS Division of Space Chemistry. The process of creating a new division within ACS can take years and will require approval from society committees and from other divisions, Pavlath said. 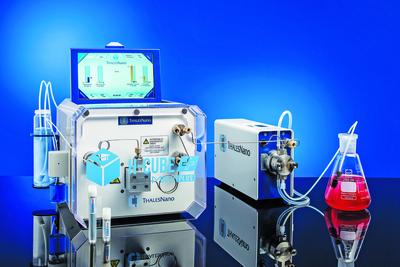 To further support chemistry’s role in human space travel, the symposium’s organizers announced the formation of SpaceFlow, an international consortium of chemists dedicated to exploring flow chemistry’s applicability for use in space environments. Speakers in San Francisco described their work in using flow chemistry to synthesize polymers, pharmaceuticals, and materials.

Darvas, whose company has developed H-cube, a desktop reactor that hydrogenates organic compounds, envisions assembling kits of simple organic reactions that could be transported on spacecraft and mixed and matched to synthesize numerous compounds.

Chemists also hope to learn if weightlessness, low temperatures, and ionizing radiation in space could be harnessed for the development of new syntheses.

Aaron Beeler, a medicinal chemistry professor at Boston University, suggested that combining flow chemistry with photochemistry, which simply uses light to initiate reactions, may be a promising avenue for synthesis in space. Photochemical reactions can be accomplished without bulky and difficult-to-manage reagents, so “maybe photochemistry will be a single platform that allows all kinds of reactions,” he said.

Right now, however, the exploration of flow chemistry’s potential for space travel faces a significant bottleneck: getting highly competitive experiment time on the International Space Station (ISS), the only space lab that provides astronauts with a continuously weightless environment.

One solution could be the Swiss-Israeli firm called SpacePharma, founded in 2012 by satellite engineers. It’s sending small satellites into space to carry out pharmaceutical chemistry experiments. These satellites may allow scientists to quickly, cheaply, and remotely test their ideas, speakers explained at the meeting in San Francisco. The first SpacePharma satellite was launched in February, and it has completed the first of its four projects. The company plans future launches and is courting scientists who want to perform experiments in space but who don’t have the time or money to get onto the ISS.

Although the speakers at the ACS meeting see much promise in flow chemistry, the ideas are still in their infancy, they said.

“Hopefully in the next decade, we’ll start getting data” that will show the use of flow chemistry for space travel, Beeler said.