Chris Bialas & Mary Leonard/UCSD
[+]Enlarge
Credit: Picture of a cartoon superhero.
Taking on the committee: Get ready for an action-packed defense. 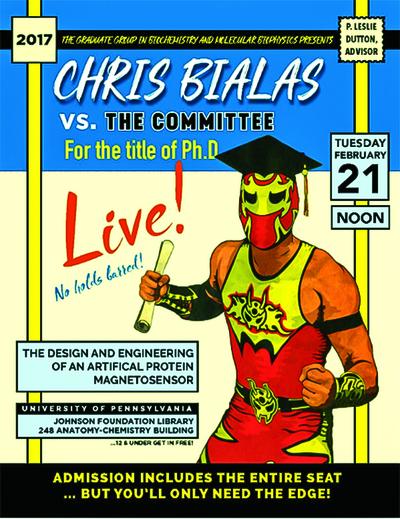 Credit: Picture of a cartoon superhero.
Taking on the committee: Get ready for an action-packed defense.

To put it bluntly, the posters that students usually use to announce their thesis defenses are lame, says doctoral student Chris Bialas of the University of Pennsylvania. So when he was preparing to defend, he opted for a flyer with a little more muscle.

His flyer still has all the standard information: the date, time, and location of his defense, along with its title, “The Design and Engineering of an Artificial Protein Magnetoreceptor.” What sets it apart, though, is the masked, muscular wrestler wearing a graduation cap and gripping a diploma.

“It’s so silly,” Bialas says of the flyer, which mixes pulp art with over-the-top machismo. “But I thought it would be cool to have something with more monster-truck style, something that said, ‘Sunday, Sunday, Sunday!’ ”

Bialas recruited Mary Leonard, a graphic designer in the university’s Biomedical Art & Design Center, and the tag team created the flyer using Photoshop and a poster Bialas had found taped to a street lamp in Philadelphia. The poster advertised a local lucha libre wrestling event, a popular style of professional wrestling developed in Mexico that is perhaps best known for its masked combatants. Bialas and Leonard changed the text and added academic accoutrements to the wrestler, or luchador.

“I think his name is Fire Ant,” Bialas says.

Although Bialas was not on his own poster, he did don a mask toward the end of his defense, which he passed. Had his defense missed the mark, promoting it with such an ostentatious flyer would have been a poor choice, but his committee seemed to enjoy it, he says. Beyond that, the flyer helped draw a standing-room-only crowd, garnered some attention on social media, and jibed with Bialas’s ethos.

“I think you’ve got to approach science with passion, but also with a sense of humor,” says Bialas, who will graduate in May.

[+]Enlarge
Credit: Will Ludwig/C&EN/Shutterstock
Was romance in the punch cards? Let’s just say if Barry were a programming language, he’d be BASIC.

Credit: Will Ludwig/C&EN/Shutterstock
Was romance in the punch cards? Let’s just say if Barry were a programming language, he’d be BASIC.

Of course, Bialas is not the only scientist with a sense of humor. In fact, at least one writer on the Newscripts gang was nearly duped by an April Fools’ prank published by University of California, San Diego, physicist Eve Armstrong.

But we probably should have guessed from the title. “A Neural Networks Approach to Predicting How Things Might Have Turned Out Had I Mustered the Nerve to Ask Barry Cottonfield to the Junior Prom Back in 1997” is pretty outlandish, Armstrong says (2017, arXiv: 1703.10449).

The title—and the paper itself—are inspired by true events, however. Armstrong considered asking the pseudonymous Barry to junior prom 20 years ago and the paper has its roots in real science.

The publication is a by-product of Armstrong’s efforts to learn about artificial neural networks, computer algorithms with a penchant for pattern recognition. Neural network approaches, for instance, are big in facial recognition software, she explains. Researchers show the programs photos of so many faces that the algorithms learn to recognize the patterns in visual data that are consistent with something being a face. The programs can then look at photos they’ve never seen before and pick out the faces.

Armstrong, however, has a different goal. As a postdoc in Henry Abarbanel’s research group, she studies artificial neural networks to try to understand how nature has connected the neural circuits that control some of life’s most basic functions.

Although Armstrong’s working on serious science, it seemed only natural for her to write a parody paper inspired by it. After all, she has a history of academic April foolery, including another publication titled “Nondetection of the Tooth Fairy at Optical Wavelengths.”

Periodic Table
Honoring the periodic table with pub trivia and Peeps
Periodic Table
Constructing the periodic table from thread and yarn
Graduate Education
Doctoral treats and moneyed scientists
Share X
To send an e-mail to multiple recipients, separate e-mail addresses with a comma, semicolon, or both.
Title: Wrestling with Ph.D. posters and computerized coulda-beens
Author: Matt Davenport
Chemical & Engineering News will not share your email address with any other person or company.

Comments
Brent Pollock (May 30, 2017 4:12 PM)
Grand fun, but if I were on his committee I would've roasted him for poor proofreading of "ARTIFICAL".
Reply »