With growth hard to come by, chemical producers look to acquisitions

The struggle chemical makers face as they attempt to grow revenues is clearly evident from C&EN’s ranking of the Top 50 U.S. chemical producers.

The 50 firms combined for $259.9 billion in sales in 2016, the year that forms the basis of the survey, a 5.6% decline from the amount the same firms posted the year before.

And it wasn’t as if sharp sales drops at a few firms weighed down the entire group. The decline was dispersed evenly throughout the industry. Of the 50 firms, only nine saw sales increase, and for a few of those—including Olin, Kraton, and Westlake Chemical—the improvement was the result of large acquisitions.

Part of the explanation for the decline can be found in oil prices, which dipped to nearly $30 per barrel early last year, their lowest levels since 2003. Although oil prices rebounded to more than $50 per barrel by the end of the year, chemical prices didn’t have time to catch up.

Look back at C&EN’s annual analysis of the Top 50 U.S. chemical companies

Moreover, even though consumer spending and employment are healthy, the U.S. economy has been posting anemic growth. Gross domestic product grew by only 1.6% last year. According to the American Chemistry Council, a trade association, the U.S. chemical industry also posted only a 1.6% increase in volumes last year.

Income also declined. The 44 firms among the 50 that report profits combined for $33.6 billion in operating income, a decrease of 9.6% versus the year-ago period.

Although profits declined, they were still historically high for the chemical industry. Moreover, only one firm, Momentive Performance Materials, posted a deficit.

Wall Street expects better performance from the industry in the future. Market capitalization, which is determined mainly by stock price, of the Top 50’s 31 publicly traded firms increased 12.5% to $367.6 billion. The industry outpaced the Standard & Poor’s 500 stock index, which climbed 9.5%.

The American Chemistry Council also expects better times for the industry in 2017. It forecasts 3.6% volume growth.

Once again, Dow Chemical sits atop the ranking with $48.2 billion in sales for 2016. It posted a 1.3% decline in revenues for the year, but it still widened its lead over number two ExxonMobil, which experienced a 7.4% drop in chemical sales to $26.1 billion.

A year ago, C&EN predicted that Dow might disappear from the ranking this year owing to its pending merger with DuPont to form DowDuPont. The two firms expected to complete the deal in 2016. But the European Commission delayed it because of worries about the impact the merger—plus Bayer’s purchase of Monsanto and ChemChina’s acquisition of Syngenta—would have on European farmers.

The Dow-DuPont deal still hasn’t closed, but the companies have taken steps to ensure clearance later this year. DuPont inked an agreement to divest much of its crop protection business and related R&D to FMC. In return, DuPont will get $1.6 billion in cash and FMC’s health and nutrition business. To appease the EC, Dow is also selling its ethylene acrylic acid polymers business to South Korea’s SK.

Dow did complete one deal in 2016, absorbing its former joint venture Dow Corning, which was ranked 16 last year.

Dow’s market capitalization grew by a whopping 20.5% in 2016, helping it edge out the company it is merging with, DuPont, for the top spot in value. Ecolab held on to number three, and Praxair beat out industrial gas rival Air Products for the fourth slot.

But DuPont spin-off Chemours provided the biggest chemical stock story of 2016. Early last year, Chemours’s stock price was weighed down by meager results, debt from DuPont, and the liability from 3,500 personal injury suits stemming from perfluorooctanoic acid pollution at the former DuPont plant in Parkersburg, W.Va. 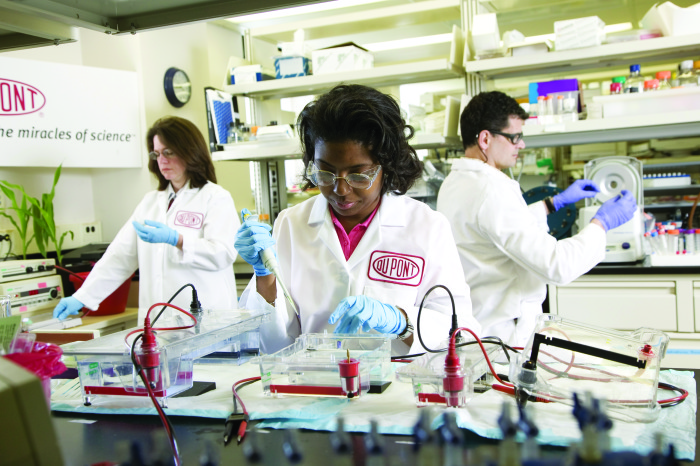 Last June, Citron Research, a short seller betting that Chemours’s stock would plummet, even predicted that Chemours was heading to bankruptcy court within the next 18 months.

Interestingly, another big stock gainer is Kronos Worldwide, which like Chemours makes the white pigment titanium dioxide. Huntsman Corp. is readying a spin-off of its own pigments business, Venator, later this year.

Thanks to deal making and corporate restructuring, the chemical industry looks noticeably different today than it did a year ago.

Mergers brought other big changes to the ranking. Olin’s chemical sales skyrocketed by 125.0% because of its purchase of Dow’s chlorine chemistry unit. It is now 17 in the ranking. Albemarle’s sales declined by 26.7% after the divestment of its Chemetall metal surface treatment business to BASF, pushing it down two places to number 25.

Slow economic growth and uncertainty are driving chemical companies to such mergers and acquisitions (M&A). “With rare exceptions, companies will increasingly find it difficult to enhance returns through organic growth and cost reduction within,” notes PwC chemicals deals leader Craig Kocak in a recent report.

At the IHS Markit World Petrochemical Conference in March, Dave Witte, general manager of oil markets, midstream, downstream, and chemicals at IHS Markit, echoed the sentiment. “If you are uncertain about where you are going to get that top-line and bottom-line growth, you know you can get it through M&A,” he told the audience.

Spin-offs filled most of the void left by the acquired companies. New to the ranking are Honeywell’s nylon spin-off AdvanSix, Air Products’ former electronic materials business Versum Materials, and the former W.R. Grace construction materials unit GCP Applied Technologies. These debut at numbers 37, 39, and 47, respectively. Others new to the list are Williams Partners at number 30, which operates a cracker in Geismar, La., and activated carbon firm Calgon Carbon at number 50.

At least three firms should be gone next year. Dow and DuPont executives expect to complete their merger in August. Last month, Germany’s Lanxess completed its purchase of number 33 Chemtura. Williams’s presence on the list is likely a one-year occurrence, as the company’s chemical business is being acquired by Nova Chemicals.

Petrochemicals are a profit center 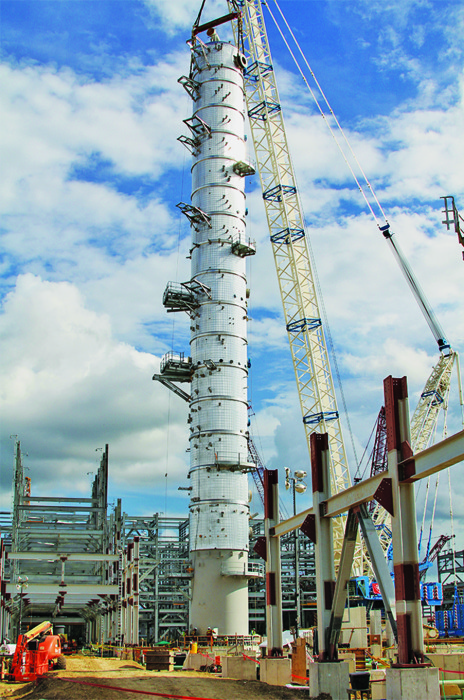 In past years, many major oil companies, chief among them Shell and BP, shed large parts of their chemical businesses to focus on oil and gas. ExxonMobil, however, stayed loyal to petrochemicals.

That strategy is now paying off. Petrochemicals made up only 11.9% of ExxonMobil’s $219 billion in annual sales last year, but they generated 68.8% of the oil giant’s profits. Low oil and gas prices pinched its performance in exploration—especially its U.S. business, which lost $4.2 billion after taxes in 2016.

In a letter to shareholders, new ExxonMobil Chief Executive Officer Darren Woods notes that the chemical results “highlight the value of our integrated business model.”

Occidental Petroleum, a much smaller firm, suffered enough in its hydrocarbon exploration and distribution businesses to lose $446 million overall despite $571 million in profits from chemicals.

Chevron Phillips Chemical posted $1.7 billion in after-tax earnings even as one of its parent firms, Chevron, reported a loss. The other parent, refiner Phillips 66, netted a profit.

All these firms are deepening their involvement in petrochemicals. Oxy started up a cracker, a joint venture with Mexichem, in Ingleside, Texas, earlier this year. Both ExxonMobil and Chevron Phillips are putting the final touches on massive petrochemical projects of their own. ExxonMobil and Saudi Basic Industries Corp. are also studying an integrated project in Texas.

It should come as no surprise that BASF, perennially the largest chemical company in the world, has more sales in the U.S. than any other foreign-owned chemical firm.

The company continues to invest heavily in the U.S. Notably, it is building an ammonia plant in Freeport, Texas, with Norway’s Yara. It is also investing in plasticizers, herbicides, and the polyurethane intermediate methylene diphenyl diisocyanate.

Two companies, Formosa Plastics and Braskem, dropped off the foreign ranking because they have not posted results for 2016. Two additions are Wacker Chemie, which posted a 47.7% increase in regional sales during the year, and Israel Chemicals.

Sales slipped for nearly all companies in 2016 as raw material costs stayed low.

Note: Figures from companies that report in native currencies were converted to dollars at average annual exchange rates from the Federal Reserve. a Sales include a significant amount of nonchemical products. b Fiscal year ended March 31, 2016. c Fiscal year ended June 30.

Stock values for most firms jumped in 2016, a few by triple digits.

Note: Based on share prices on Dec. 30, 2016, and Dec. 31, 2015. These 31 companies are the publicly traded firms on the Top 50 list that generate more than half of their sales through chemical manufacturing.

Endocrine Disruptors
Pesticides, biotech crops on wildlife refuges trigger lawsuit
Endocrine Disruptors
EU to bar sales of televisions with flame retardants in their casings
Endocrine Disruptors
Approved technique detects bisphenol A in some beverages
Share X
To send an e-mail to multiple recipients, separate e-mail addresses with a comma, semicolon, or both.
Title: Top 50 U.S. chemical producers of 2016
Author: Alexander H. Tullo
Chemical & Engineering News will not share your email address with any other person or company.

Why are the rankings missing the likes of Shell and Total?

Alex Tullo (August 25, 2017 3:15 PM)
Good question. They don't break out chemical sales. Total does do it for specialty chemical sales, actually. But those alone are too low to make the list.
Reply »

dhafir@hotmail.com (September 13, 2017 6:34 AM)
Hi Alex, very good report and distinguished effort. I have seen SABIC in previous report but this one it is not part of the list. Any specific reasons that can be shared and explained. Kind Regards, Dhafir
Reply »