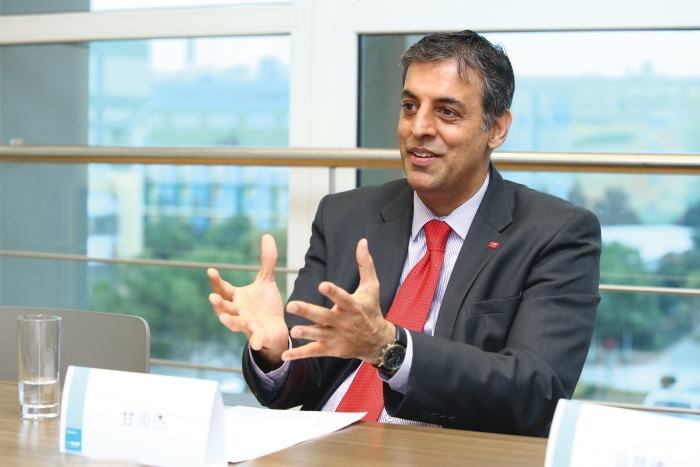 In the recent past, BASF’s performance in Asia has been nothing to get excited about. From 2012 to 2015, the German chemical giant’s sales in the region stagnated in euros, the currency by which BASF measures its performance. But for 2017 and beyond, things are looking up, says Sanjeev Gandhi, the company’s board member responsible for Asia and the Pacific.

“In the past four, five years, we had a massive increase in investment in Asia and the Pacific,” he tells C&EN from the company’s office in Hong Kong’s Central district. “We are now starting to bring those capacities on-stream.”

Even though China, Asia’s largest chemical market, has been slowing the region’s for the past four years, BASF continued to invest in new facilities and new R&D centers, as well as in strengthening its sales infrastructure. BASF’s efforts will pay off in the coming years, Gandhi predicts, regardless of whether the Chinese economy returns to its past rate of rapid growth.

BASF reckons it’s the only Western firm among the top 10 chemical suppliers in Asia.

Note: Data based on sales in Asia for BASF and total sales for all other firms.
Source: BASF

“With our current asset base, our new capacities, our sales infrastructure, and our investment in R&D, we are in a pole position to be one of the leaders in terms of market growth,” Gandhi says. “We plan to grow in Asia at a rate slightly higher than average chemical market growth.”

But how much the Asian regional chemical market will grow in the near feature is uncertain because Asia could be affected by external factors such as the U.K. leaving the European Union or trade policies adopted by the new U.S. Administration. The Asian Development Bank expects Asia, minus Japan, to experience average growth of 5.7% in 2017. The largest economy, China, will grow 6.4%, the bank expects.

In 2017, BASF will welcome the start-up of a $500 million aroma chemical plant in Malaysia, a polyisobutylene plant in Malaysia, automotive coating and process catalyst plants in Shanghai, and a mobile emissions catalyst plant in Thailand. Within a year or two, BASF will also be increasing production at its polyurethane complex in Chongqing, China. The facility has been operating below capacity because of delays in the supply of raw materials, such as chlorine, from local operators.

BASF already sells all those materials in Asia, in some cases by sourcing from its plants in Europe and the U.S. But being closer to customers in Asia will boost competitiveness and, therefore, sales, Gandhi anticipates. “Sourcing from abroad is ineffective and slow,” he says. “It adds lead times that our customers don’t appreciate.”

To sell more chemicals and materials in Asia, BASF can rely on a sales force of several thousand people, says Gandhi, who himself sold commodity chemicals in India for BASF in the 1990s. “We have a presence in 16 countries in Asia, where customers or business partners, within a very short period of time, can expect to meet our people face to face,” he says.

To support its sales organization, BASF is setting up new R&D and technical centers that can assist customers in customizing raw materials for their new products. For instance, this spring the firm will inaugurate a new research campus in Mumbai that will employ around 300 scientists. The center will be smaller than the company’s main regional research facility in Shanghai but still be big enough to support several of BASF’s businesses in southern Asia.

BASF’s investment in new facilities is happening at a time when Asian economic growth is slowing, especially in China. But Gandhi remains upbeat.

Much of the slowdown in China, he says, can be attributed to an economic “rebalancing” engineered by the government to promote the growth of service industries and deemphasize the importance of exports. This transition led initially to lower demand for some of BASF’s materials, but demand has since recovered on a stronger foundation, he says.

Meanwhile, China’s car and construction industries, two areas in which BASF is very active, continue to grow. Construction is a particularly important driver of business for BASF, Gandhi notes. “When people buy a new apartment, or an office, then they buy furnishing, they buy ‘white goods,’ and so on, and there’s a lot of BASF chemistry in those items.”

The enduring vigor of the construction market in China is surprising given that tens of thousands of apartments sit vacant across the country, often clustered together in so-called ghost cities. Despite this overbuilding, a property crash in China is far from imminent, according to David Jiang, president of the chemical market survey firm Sinodata Consulting.

“The level of construction activity cannot continue forever when we have already built enough apartments for the next five to 10 years,” Jiang says. “But the government continues to support the real estate industry because it can raise revenues by selling land to developers.” As a result, Jiang says, the construction industry will remain buoyant in China in the near term.

While certain sectors of the Chinese economy remain healthy, in India, demand is vigorous across the board, Gandhi says. “As in China, people in India want better products, better cars, better houses, better food,” he says. India’s economy has been growing faster than China’s for the past two years, but, for BASF, the market is less important than China’s. “We are quite happy with the business,” Gandhi explains, “but the market size in India is not even close to what it is in China.”

BASF also has a well-developed presence in Asia’s second-largest economy, Japan. One of the main goals there is to keep pace in a country that is particularly innovative in chemicals and materials. A key focus is battery materials, an industry for which Japan is the recognized leader. BASF has two battery materials plants in Japan as well as an R&D center.

With regional sales of more than $13 billion annually, BASF is the only Western company among the 10 largest chemical players in Asia, Gandhi notes. Given its continued investment in the region, BASF has a steadily expanding footprint that could make it one of the top five players in Asia in the years ahead.