Cyclicality cited as the main driver in a 50% drop-off 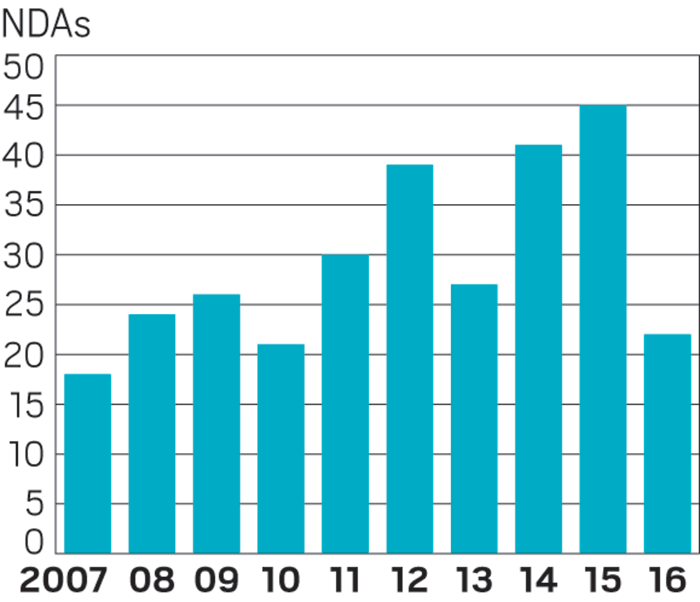 Pharmaceutical industry doomsayers have been licking their chops for months watching the roster of drug approvals for 2016 limp to a weak total of 22, following a record of 45 approvals in 2015. The roughly 50% drop comes after five years of generally increasing Food & Drug Administration approvals.

Seeing the low numbers coming, industry watchers have been waxing leery regarding a possible industry downturn. Questions about whether drug companies will be able to adequately fund investment in R&D were sharpened by this year’s disappointing approval tally.

Industry analysts, however, say the downturn is normal. “You always have to expect some cyclicality both in the submissions and the number of drugs approved,” says Jon Lange, head of Ernst & Young’s life sciences R&D division.

Lange acknowledges that the drop, in part, reflects the increasing difficulty that drugmakers experience in hitting the mark in tough areas such as Alzheimer’s disease and oncology. On the other hand, a number of drugs that were expected to be approved last year were given fast-track approval, which boosted the count for 2015.

John LaMattina, a senior partner at PureTech Ventures and former head of R&D at Pfizer, agrees that the downturn is largely normal. “After two outstanding years of approvals, especially considering how much more difficult it is to get drugs approved now than 20 years ago, it is not surprising that only 22 drugs were approved in 2016,” he says. “However, if this level of productivity continues for the rest of this decade, one would have to worry about the health of the biopharmaceutical industry.”

Pharmaceutical Research & Manufacturers of America (PhRMA), an industry trade group, insists that the numbers do not reflect poorly on research. “As 2016 brought with it continued innovation, it’s important to note that drug discovery is becoming increasingly challenging as researchers tackle the most vexing diseases,” PhRMA said in a written statement.

PhRMA notes that the reauthorization of the Prescription Drug User Fee Act will likely accelerate review times in the years ahead. And several industry watchers, including LaMattina, have noted that the incoming Trump Administration may act to expedite drug approvals, though little fundamental change is expected with this month’s transition in the White House.

Business
Deal value falls in 2017
Business
Pharma M&A on pace to hit industry’s ‘new normal’
Pharmaceuticals
The Year In New Drugs
Share X
To send an e-mail to multiple recipients, separate e-mail addresses with a comma, semicolon, or both.
Title: New drug approvals plummet in 2016
Author: Rick Mullin
Chemical & Engineering News will not share your email address with any other person or company.