Berlin exhibit features alchemical oddities from around the globe

Over the past several decades, historians of chemistry have refurbished the reputation of alchemists. Long seen as con artists who claimed they could produce life-extending elixirs and convert base metals into gold and silver, alchemists pursued a lot of serious chemistry too. They produced pigments, developed metallurgy, and made colored glasses—which, well, they did occasionally sell as fake gems. The point is, like most history, alchemy ain’t all pretty, but it is still important to chemistry’s past. This brings us to Berlin and an extensive new exhibit on alchemy at the city’s Kulturforum museum that runs through July 23, 2017. The exhibit’s curator Jörg Völlnagel focused on presenting the intersection between art and alchemy in Europe, India, and China. Among the 230 objects in the exhibit are fascinating surprises about alchemical and, by extension, chemical history. Here’s a sample of our favorite pieces. 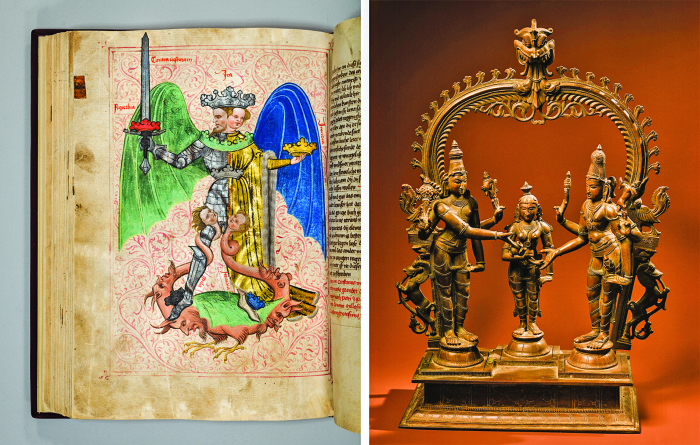 Credit: Staatliche Museen zu Berlin, Kupferstichkabinett
Although historians do not know whether alchemists in Europe and India (or Asia) had any contact, they share some themes in their allegorical representations of chemical transformations. For example, European alchemists obsessively represented their experiments with hermaphrodites because alchemy allowed practitioners to synthesize substances with opposite characteristics and qualities into one product—or in this case, one body, explains exhibit curator Jörg Völlnagel (above, left). Meanwhile, Indian alchemists represented their chemical processes as a kind of wedding between male (Shiva) and female (Shakti) components (above, right). In China, the alchemical imagery often included the yin and yang symbols that unite to create a perfect round circle out of opposite components, Völlnagel adds. 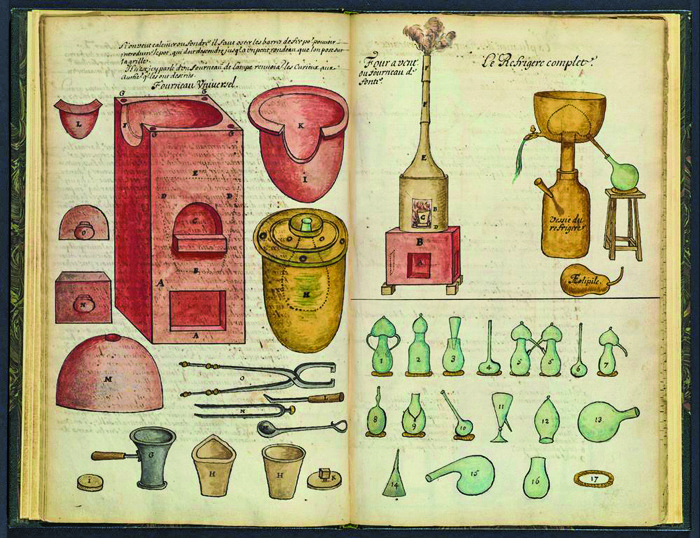 Credit: Getty Research Institute
Featured in the anonymously written text “Traité de Chymie,” this deluxe lab starter set from 1700 includes flasks and other glassware, distillation equipment, crucibles, casting ladles, forceps, and fire-ready vessels. If your goal during this period was the transmutation of base metals into gold, the Athanor oven on display was the gadget for you. 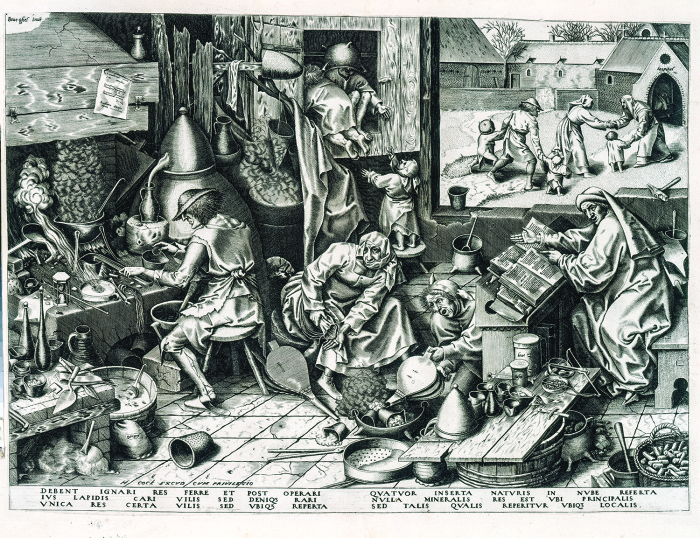 Credit: Staatliche Museen zu Berlin, Kupferstichkabinett
Think your workspace is a mess? At least your lab safety, we hope, is better than that depicted in this 16th-century scene of an alchemist at work. The artist was probably expressing some criticism of the practice. In the foreground, an alchemist wears a jester’s hat as he pumps air with a bellows, and through the window, you can see a family heading to the poorhouse, presumably as a consequence of the parent’s alchemical work.

Credit: Staatliche Museen zu Berlin, Ägyptisches Museum und Papyrussammlung
Egyptian alchemists invented the first synthetic pigment (left), a calcium copper silicate aptly named Egyptian blue, during the third millennium B.C.E. for use on pottery or sarcophagi. This chunk of pigment is associated with Amenhotep IV, a pharaoh who ruled for 17 years in the 14th century B.C.E. Knowledge of how to produce the pigment was lost at the end of the Greco-Roman era, around the fourth century. In the meantime, the mineral lapis lazuli stood in as an expensive blue pigment alternative. By the 18th century, though, chemists invented a new synthetic alternative, called Prussian blue, which was used to dye this 19th-century textile (right). Prussian blue features cyanide ions tightly bound to iron centers. 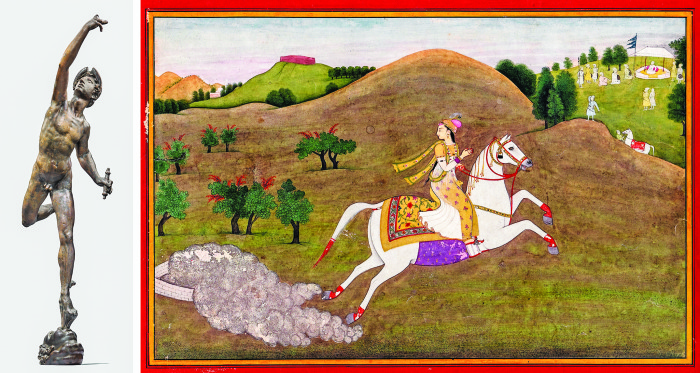 Credit: Skulpturensammlung und Museum für Byzantinische Kunst, Staatliche / Sammlung L. Habighorst, Koblenz
When you want to blame a deity for your failed alchemical experiment or supplicate one in anticipation of success, your go-to god is Mercury (left). Not only was he messenger to the Roman gods, but he was also the patron deity of alchemy and namesake of the alchemists’ favorite liquid metal. In Indian mythology, mercury has a cosmic origin: Namely, it derives from the semen of the god Shiva. In this Indian Pahari painting (right), a horse-riding virgin entices mercury out of a well and then over to an outdoor alchemical festival shown at top right. 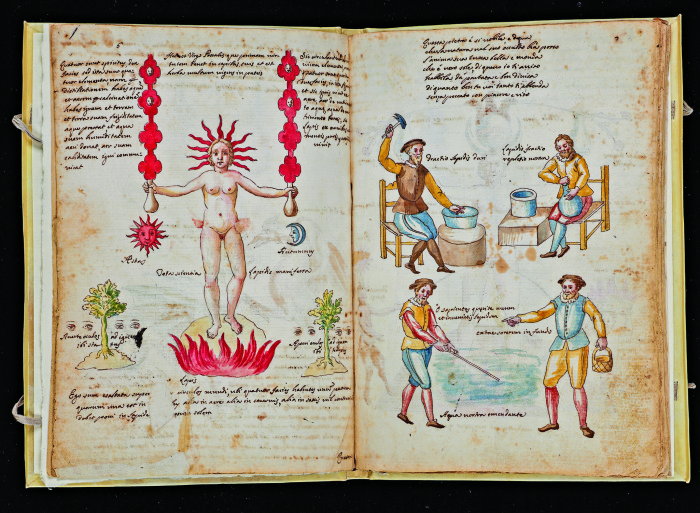 Credit: Getty Research Institute
An idea for the Materials & Methods section in your next journal article? Inspiration for your next research infographic? This excerpt from a 17th-century recipe book from Naples gives an allegorical explanation of how to distill quicksilver, or mercury.

Credit: Newscom
This Can$1 million gold coin (left) is a tribute to modern metallurgy for its exceptional purity and size—it is 53 cm in diameter and 3 cm thick and now worth closer to $4 million. Because alchemists were the original metallurgists, the 100-kg coin was supposed to feature in the art and alchemy exhibit at Berlin’s Kulturforum. But it was stolen in a spectacular nighttime heist just days before it was to be moved to the exhibit location. Using a ladder, the still-at-large thieves broke in through a window at Berlin’s Bode Museum (right) from a commuter railway and stealthily removed the coin around 3:30 AM.
[+]Enlarge
Credit: Staatliche Museen zu Berlin, Museum für Asiatische Kunst
Turns out the search for the fountain of youth was not restricted to European alchemists. This decorated Ming dynasty red lacquer tray made in China during the 16th or 17th century depicts alchemists producing a pill that supposedly delivers eternal life. The red pigment used to decorate the tray is cinnabar, which is synthesized from sulfur and mercury. Alchemists ingested the compound to attempt immortality.

Credit: Staatliche Museen zu Berlin, Museum für Asiatische Kunst
Turns out the search for the fountain of youth was not restricted to European alchemists. This decorated Ming dynasty red lacquer tray made in China during the 16th or 17th century depicts alchemists producing a pill that supposedly delivers eternal life. The red pigment used to decorate the tray is cinnabar, which is synthesized from sulfur and mercury. Alchemists ingested the compound to attempt immortality.
[+]Enlarge
Credit: Staatliche Museen zu Berlin, Kunstgewerbemuseum
This receptacle might look as though it's made of ruby, but it's just glass. One of the sought-after skills of alchemists was their ability to make artificial gems in the lab. For instance, alchemists made these “gold ruby” glass specimens around 1700, achieving the crimson color by mixing gold salts into molten glass. 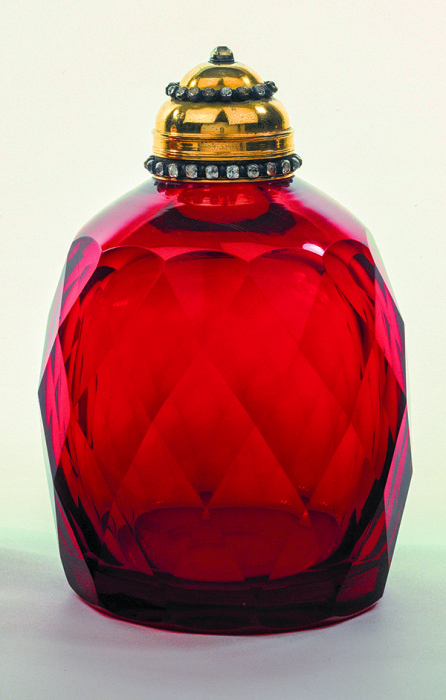 Credit: Staatliche Museen zu Berlin, Kunstgewerbemuseum
This receptacle might look as though it's made of ruby, but it's just glass. One of the sought-after skills of alchemists was their ability to make artificial gems in the lab. For instance, alchemists made these “gold ruby” glass specimens around 1700, achieving the crimson color by mixing gold salts into molten glass.
Chemical & Engineering News
ISSN 0009-2347
Copyright © 2020 American Chemical Society