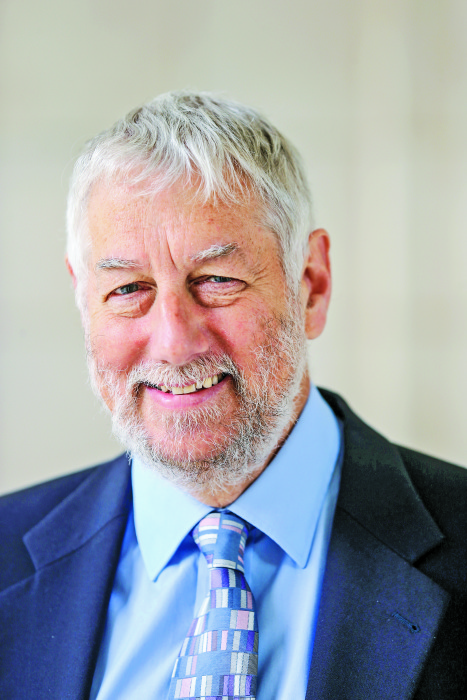 Graham Hutchings of Cardiff University made a discovery in 1982 that came to define his career. He predicted that gold—despite its reputation for being inert—should be an excellent catalyst for an industrial reaction that makes vinyl chloride (chloroethene), used to produce one of the world’s most ubiquitous plastics, polyvinyl chloride (PVC).

More than three decades later, Hutchings is still working on gold catalysts, and his pioneering research has finally helped gold start replacing the conventional mercury-based catalyst in China’s vinyl chloride plants, stemming a major source of pollution. And just in time: The global Minamata Convention on Mercury requires that starting in 2022, every vinyl chloride plant must be mercury-free. Mark Peplow spoke to Hutchings about his golden quest.

How did this all begin?

I was working for African Explosives & Chemical Industries (AECI) in South Africa, and the company had a process for making vinyl chloride from acetylene and hydrogen chloride that used a mercuric chloride catalyst. The mercury was highly polluting, and the catalyst would last only a few months, so AECI wanted something better. I realized that the activity of metal catalysts in this reaction correlated to their standard electrode potentials—a measure of their tendency to gain or lose electrons—and predicted that gold would be the best catalyst. It was like a eureka moment.

Back then, if you tried to convince people that gold would be a brilliant catalyst, they’d say you weren’t thinking straight because it is the most noble of the metals, and consequently it’s not going to give up electrons easily in a catalytic reaction. But we built a reactor and tested the reaction, and gold was indeed the best.

So how does the catalyst work?

In those days we were dissolving gold metal in aqua regia—a mixture of concentrated nitric and hydrochloric acids—to form chloroauric acid (HAuCl4) and then impregnating those gold cations onto activated carbon. We were using about 2% gold by weight, which is an enormous amount.

The catalyst works by activating the triple bond in acetylene toward an addition reaction with hydrogen chloride gas, and we’ve recently proved that the active form of the catalyst is the Au(I) cation (Science 2017, DOI: 10.1126/science.aal3439).

What happened after your initial discovery?

It was not commercialized in South Africa because AECI couldn’t overcome a problem with deactivation. The carbon reduces cationic gold to metallic gold—Au(0)—making nanoparticles that are inactive. Our small-scale process worked because we were using a solution with an oxidizing agent in it—the aqua regia—so that the gold oxidized back up to Au(I) and Au(III).

But to make this commercially viable, you can’t use aqua regia as a solvent; you’d need half a ton of it for every ton of catalyst. You can’t dispose of that much concentrated acid, so the method has to be water-based. But if you use chloroauric acid in water, the carbon reduces the gold, making it inactive. You also need a very active catalyst with very little gold to make it economical. And it has to be a catalyst that can drop into existing reactors.

I joined the University of the Witwatersrand in 1984, and we looked at the deactivation and reactivation of the catalyst. But after moving back to the U.K., it wasn’t until 2004 that I really started working on gold for vinyl chloride catalysis again.

Then in 2007, the specialty chemical company Johnson Matthey acquired the rights to the AECI work I had done. Peter Johnston, who was one of my Ph.D. students at Witwatersrand, was at Johnson Matthey and approached us to work on it again. I was absolutely overjoyed that someone had picked this up and was running with it.

Peter made the innovation. He realized that you need a large, polarizable ligand such as thiosulfate that stabilizes the gold ions on the carbon to stop them from forming inactive metal nanoparticles. That means you can make gold thiosulfate in water and impregnate it onto the carbon. Just a fraction of a percent of gold makes an extremely active catalyst. In a very short time, we got to a formulation that worked.

A pilot test in 2011 gave spectacular performance, with productivity probably four times as good as that of the mercuric chloride catalyst. The gold is also longer lived and far more selective: With mercury, you also make a by-product, ethane dichloride.

Most Western manufacturers make vinyl chloride by combining ethene and chlorine over an iron(III) chloride catalyst, which makes 1,2-dichloroethane, followed by thermal cracking to produce vinyl chloride. Could China just switch to that process?

I doubt it because China has lots and lots of coal—the main source of acetylene—so they are already set up for the acetylene route. China makes more than 13 million metric tons of vinyl chloride per year, about one-third of the world’s supply, and that would be a lot of ethene to source from oil.

Sixty percent of all the mercury that is mined goes into making this mercury catalyst. It’s just not sustainable. China has ratified the Minamata Convention, and the gold replacement is rolling out, but it takes time.

Isn’t the price of gold a major drawback?

You could say the same about palladium or platinum catalysts, but that doesn’t stop people putting them in car exhausts. The price of the metal is less important than its efficacy. In a commercial process, the amount that the catalyst adds to the final price of the product is very small.

Are you still working on gold catalysts for other applications?

Yes, very much so. We use it for oxidation reactions, reduction reactions—there’s a whole range. The trick is how you prepare gold catalysts, and that has led to the real innovations we’ve seen. You need gold cations in the vinyl chloride catalyst, but for the other applications you want metallic gold. There’s a hierarchy of catalyst activity depending on whether the gold is in the form of small nanoparticles, clusters of atoms, or even single atoms, and their relative proportions determine what the active catalytic species is.

It’s been a labor of love, but now everybody agrees that gold is a fantastic catalyst.

Mark Peplow is a freelance writer. A version of this story first appeared in ACS Central Science: cenm.ag/hutchings. This interview was edited for length and clarity.