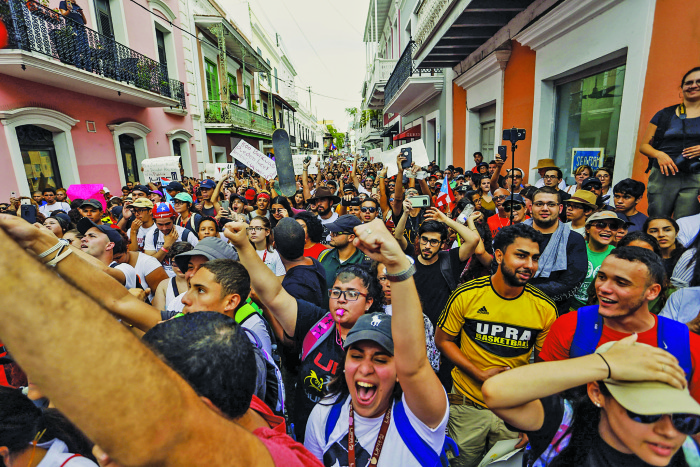 University of Puerto Rico (UPR) chemists are facing tough times as the island nation’s budget crisis is worsening and student strikes have shut down most campuses.

Puerto Rico filed for bankruptcy earlier this month in hopes of freeing itself from some of its $123 billion in debt and pension payments. In the meantime, a debt oversight board is pushing large cuts across the government. For UPR’s 11 campuses, the board has mandated $520 million in cuts over the next few years. That’s out of a yearly budget of around $960 million.

Science departments such as chemistry will likely “be more affected because our expenses our higher” than departments such as history, suggests chemist José Prieto from UPR Río Piedras. “We have [already] been cutting our budget for the last five years.”

Río Piedras department chair Néstor Carballeira says the cuts will primarily impact the teaching of classes and labs. Most professors’ research is supported through outside funding from NSF, NIH, and other federal agencies.

Enrique Meléndez, chair of the UPR Mayagüez chemistry department, expects to lose $1 million from a $7.7 million budget next year. His early estimates suggest that classes would support 1,000 to 1,500 fewer undergraduate students.

The resulting decline in teaching assistant slots means the school has not been able to guarantee potential graduate students funding in their first year, he says. That could drive many Puerto Rican students, who are U.S. citizens, to choose graduate school in the U.S. instead.

The “oversight board and the government don’t realize they are strangling the university,” Meléndez says. “We could vanish.”

Student strikes protesting the cuts have shut down teaching at most UPR campuses for almost two months. Ingrid Montes, a chemistry professor at UPR Río Piedras, says research has been allowed to continue. But graduating seniors might be held up from attending graduate, medical, or professional schools if the strike does not resolve soon.

“We need to open, and we need to open as soon as possible,” says Montes, a board member of the American Chemical Society, which publishes C&EN. “The situation is very stressful and very sad.”

Puerto Rico’s fiscal problems began in the mid-1990s with the phaseout of U.S. tax breaks that had made the island attractive to businesses. Many pharmaceutical companies left the island. Since then, “the situation has been sort of tight for chemists,” Carballeira says.

Though some UPR-trained chemists find jobs at the few remaining pharmaceutical companies, many go to the U.S. for a postdoc and then find employment there. That will likely be true for academic job seekers if a UPR hiring freeze is extended along with the budget cuts. Those who stay are facing pay cuts and fewer benefits.

“Good people may leave,” Meléndez says. “And I don’t blame them.”