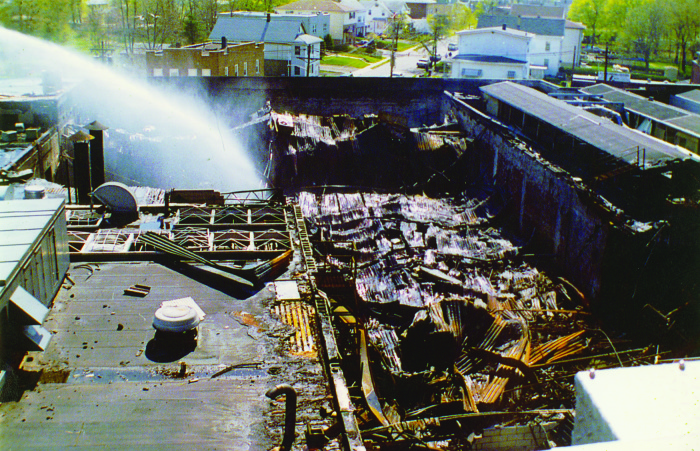 Credit: EPA
A 1995 fatal explosion at the Lodi, N.J., production plant of chemical manufacturer Napp Technologies led to the start of the U.S. Chemical Safety Board.

The future of the U.S. Chemical Safety & Hazard Investigation Board is in doubt now that President Donald J. Trump is proposing to abolish the small agency.

CSB is the world’s only independent body dedicated to investigating chemical-related industrial accidents to find their root causes and, in hopes of preventing similar incidents, pass this information on to companies, regulators, workers, and communities.

Trump’s plan to eliminate CSB by defunding it, announced in March, has generated an outpouring of support for the board. The backing comes mainly from residents living near large U.S. industrial plants and refineries, unions, local officials, and safety experts. Several companies that have been investigated by CSB as well as the American Chemistry Council, a chemical industry trade association, are tight-lipped and reluctant to comment on the impact of the proposed elimination of the board.

Ultimately, the fate of CSB will turn on whether Congress decides to provide funding for it. The board took on several of its most significant investigations, including into the 2010 BP Deepwater Horizon oil disaster, at the behest of lawmakers. Members of Congress have not yet indicated whether they will support CSB’s continued existence. Lawmakers funded CSB for $11 million this year.

The proposal to shut down CSB is part of Trump’s blueprint to slash nonmilitary federal spending for fiscal year 2018, which starts on Oct. 1. The reductions are needed, the President says, to increase defense spending by $54 billion and build a U.S.-Mexico border wall.

Trump’s proposal to defund the board surprised CSB Chair Vanessa Allen Sutherland. As in previous years, she expected the board to have to fight for annual funding when she was called to the White House Office of Management & Budget in mid-March, Sutherland says. This year, however, she was told CSB would be eliminated, with its funding pruned in fiscal 2018 to a minimal level needed to shut it down.

Defunding CSB would return the U.S. to a time in which there was little, if any, federal investigation into major industrial accidents.

CSB was created through a provision in the most recent major legislative overhaul of the Clean Air Act, which took place in 1990. Controversial from the beginning, CSB was opposed by then-President George H. W. Bush because of its independence, according to a statement he released when signing the legislation.

Former president Bill Clinton also did not support the board. Instead, Clinton directed the Environmental Protection Agency and the Occupational Safety & Health Administration to investigate accidents.

As incidents continued, the two agencies fell far behind in their probes. The agencies had little incentive to investigate because they were likely to be partially at fault because of a lack of enforcement of existing regulations, says Gerald Poje, one of the first CSB board members.

An April 1995 explosion and fire at Napp Technologies in Lodi, N.J., changed the situation, Poje says. The accident killed five workers and destroyed most of the facility and surrounding businesses.

The blast was just a few kilometers from the home of Sen. Frank R. Lautenberg (D-N.J.), who had been instrumental in inserting the CSB provisions in the Clean Air Act. When OSHA’s and EPA’s investigation of the disaster stalled, pressure from Lautenberg, unions, community groups, the New Jersey governor, and others led Clinton to support funding CSB.

In response to Clinton’s request, Congress appropriated $4 million, and in January 1998, CSB opened its doors.

CSB’s annual budget has never exceeded $12 million, which is one-tenth of that of the National Transportation Safety Board, which investigates transportation accidents and on which CSB is modeled.

Despite its small budget, CSB has investigated some 130 accidents and produced more than 90 accident reports and some 40 safety videos based on specific accidents. It has influenced industrial and chemical safety in the U.S. and across the world through its recommendations, according to industrial accident experts contacted by C&EN.

For instance, the U.K. Health & Safety Executive (HSE) that regulates industry in Britain uses insights and findings from CSB investigations to back up its regulations, says Ian Whewell, former HSE director of offshore safety.

“We all must learn the lessons of the past,” he says. “Without CSB carrying out independent, nonjudgmental investigations, U.S. chemical and petrochemical industries would be without one of the key tools they need to reduce the risk of catastrophic accidents.”

“Trump’s proposal is unwise,” he states. “The next major incident in 2017 will prompt a catalytic change in thinking about CSB. Its budget is tiny, far less than the property loss from a single industry accident.”

He adds, “CSB is a bargain for helping protect the homeland, save lives, and better ensure continuity of businesses.”

Jeff Johnson is a freelance writer based in Washington, D.C.

Comments
Lillian Espinoza-Gala (May 24, 2017 10:12 PM)
This is such a critical mission we need to get word out to the public. I thought about posting this on Facebook and LinkedIn.

CSB is respected across the globe and performs a service not available from any other government agency,
Reply »

Riccardo (May 25, 2017 5:11 AM)
I fully agree with the article contents. Trump's proposal is not just unwise, but it also goes against the general public interest, in order to protect the interests of few. The CSB is really an independent agency whose investigations and learnings are shared globally across the industry.
Reply »

John Boruta (May 30, 2017 4:23 PM)
It's incredulous to me that this is even under consideration. Any budgetary savings are miniscule in the grand scheme of things. The need to have an independent board investigate and determine true root cause of a catastrophe helps to avoid repetitive errors, saves lives and helps protect both businesses and communities. I mean, how is the CSB any different than the NTSB investigating an airline catastrophe.
Reply »

Trevor Sweeny CEng CChem MIChemE (November 1, 2017 9:22 PM)
As a chemical engineer who is a visiting lecturer in risk management to final year chemical engineering students, I have used the Board's investigation reports extensively to stress the importance of sound design and management of chemical manufacturing facilities. I am sure I am not alone in facing what would be a significant gap in the provision of the excellent historical information the Board's reports give.
Reply »

Cheryl Hogue (March 23, 2018 11:23 AM)
Billy -- Don't forget about rent, utilities, supplies, and, probably more than anything, travel costs to get to explosion sites and do on-the-ground investigation. So that's not all salary.
Reply »