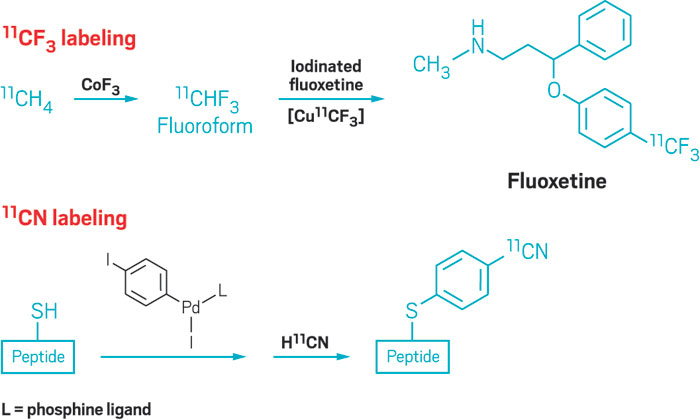 When you get a positron emission tomography (PET) scan, the medical procedure begins minutes beforehand when a chemist prepares a radioactive imaging agent starting from a simple isotope-labeled compound created in a cyclotron. Radiation given off by the imaging agent, which is typically a sugar, peptide, or other so-called reporter biomolecule, can be tracked as the agent travels through your body, allowing for the assessment of drug distribution, protein expression, and metabolism to diagnose disease and monitor your health.

During the past few years, chemists have reported a number of synthetic breakthroughs making 18F-labeled compounds. Fluorine can improve the performance of imaging agents by helping the compounds reach their targets. And 18F has a half-life of about 110 minutes, versus only about 20 minutes for 11C, the other commonly used PET isotope, providing more time to prepare the imaging agent.

Haskali and Pike found that cobalt trifluoride readily fluorinates 11CH4 to 11CHF3, which the researchers then used to prepare a copper transfer reagent for incorporating 11CF3 groups into model compounds such as benzophenone and known drugs such as the antidepressant fluoxetine (Prozac). Start to finish, the synthesis takes less than 20 minutes and achieves a higher level of radioactivity, and therefore potentially better PET image quality, than is possible by starting with 18F-labeled fluoroform.

Chemists have focused on generating 18F-labeled CF3 groups, but due to the quirks of 18F chemistry, only modest radioactivity in imaging agents has been achieved, notes PET radiochemist Philip Miller of Imperial College London. “This paper describes a really novel workaround to the molar activity issue by using 11C-labeled fluoroform,” Miller says. “This will be a real boon for those needing to develop PET probes with CF3 groups, and demonstrates the versatility of 11C as an isotope for PET tracers.”

The approach demonstrates “some very clever” 11C coupling chemistry that opens up new possibilities for peptide labeling, Miller says. Carbon-11 is not commonly used for peptide labeling because of the chemical and time challenges, Miller adds. “Not only are these new 11C-labeling reactions fast and selective on the peptide, the team has also proved that the labeling system is workable under high-activity synthesis.”