In the spotlight: A bacon fest and a giant periodic chart of the elements

A bacon fest to die for 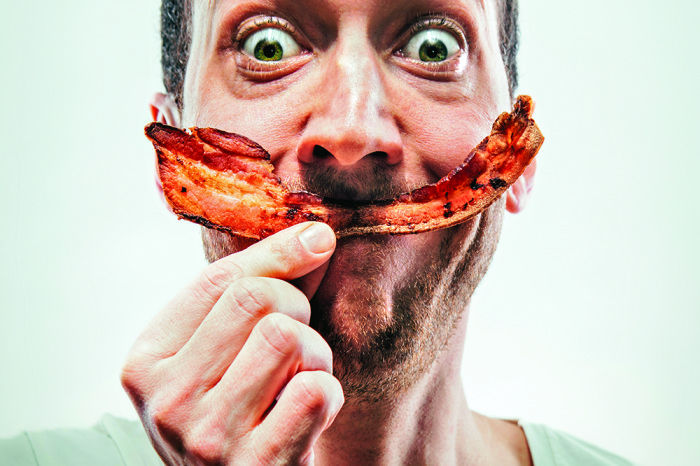 Credit: iStock
Fun with bacon: The savory meat has legions of enthusiastic admirers.

Bacon is a nutritional no-no: It’s a highly processed slab of red meat and fat with sky-high sodium content.

Food scientists continue to sound the alarm over gorging on the savory treat along with other highly processed meats, foods with high salt content, and sugary drinks. Yet bacon consumption is at record levels, and food lovers continue to go whole hog for the crunchy treat, flocking to such celebratory gatherings as Camp Bacon.

The five-day fest in Ann Arbor, Mich., which concluded on June 4, featured bacon-baking classes, a pig roast, bacon-filled meals, and presentations from meat-loving journalists and chefs. Bacon scones, doughnuts, and cookies were all on the menu. Joe Mislinski, who writes the My Life with Bacon blog, offered up a sizzling talk about crimes involving bacon in literature, film, and real life.

Camp Bacon even had a bacon-focused film festival. And who doesn’t enjoy watching a movie while munching on some delectable snacks? Munchies available at the film forum included bacon popcorn and apple bacon crisp.

Surely no one at Camp Bacon was giving much thought to downing cardio-healthy nuts, seafood loaded with omega-3 fatty acids, and vegetables. Nor is it likely many camp attendees had curled up on a couch during a cold wintry night in early March to read the Journal of the American Medical Association study linking dietary factors to a substantial portion of deaths from heart disease, stroke, and diabetes (2017, DOI: 10.1001/jama.2017.0947).

Had Camp Bacon attendees read it, they would have learned that the authors had correlated reports on 702,000 U.S. adult deaths from cardiometabolic diseases in 2012 with national health and nutritional surveys to find that nearly half of all the deaths were associated with suboptimal eating habits. Among processed foods high in sodium, bacon is a high-mortality winner.

Given all the negative attention focused for years on salt-laced processed foods, bacon lovers probably know that bacon isn’t exactly kosher. But then again, they might not care. To bacon aficionados, partaking of the crispy indulgence is hog heaven.

While folks flock to Ann Arbor to celebrate all things bacon, the faculty at the University of Murcia in Spain has succeeded in bringing home the bacon: a giant periodic table of the elements emblazoned on the facade of the school’s chemistry building. 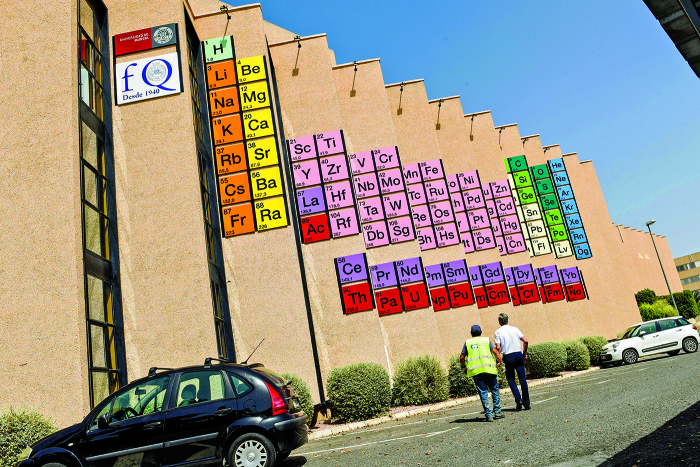 Covering 150 m2, the table displays 118 elements identified by their symbol, atomic number, and atomic mass. “It could be the world’s largest permanent periodic table placed on a wall,” Pedro Lozano Rodriguez, dean of the department of chemistry at the school, tells Newscripts.

A number of local companies chipped in to place the oversize chart on the side of the building, including the energy firm Repsol, the brewer Estrella de Levante, and personal care products maker Tahe Productos Cosméticos. Lozano says the display will serve as part of an introductory chemistry lesson for incoming freshmen.

After a bit of sleuthing, the Newscripts gang found evidence that others have also attempted to establish periodic table world records. In 2006, science enthusiasts posted an eight-story-high periodic table in the windows of a municipal building in Chicago.

In 2012, Merrimack College students in Massachusetts painted a 2,600-m2 chart on a grass field. But the Chicago and Massachusetts efforts were not permanent installations like the one at the University of Murcia.

In 2010, University of Nottingham scientists constructed the smallest periodic table, which was carved on a human hair using an ion beam and an electron microscope, according to Guinness World Records.

So for now, at least, it appears that the University of Murcia holds the record for large permanent exterior periodic table displays.

Periodic Table
The 2019 #RealTimeElements Week Awards
Periodic Table
The International Year of the Periodic Table officially kicks off in Paris
Education
Table of elements writ large and more fun with bacon
Share X
To send an e-mail to multiple recipients, separate e-mail addresses with a comma, semicolon, or both.
Title: In the spotlight: A bacon fest and a giant periodic chart of the elements
Author: Marc S. Reisch
Chemical & Engineering News will not share your email address with any other person or company.