New details on mercury’s route to the Arctic

Most deposition of the neurotoxic metal to tundra is Hg0 from atmosphere, not Hg2+ from rain and snow 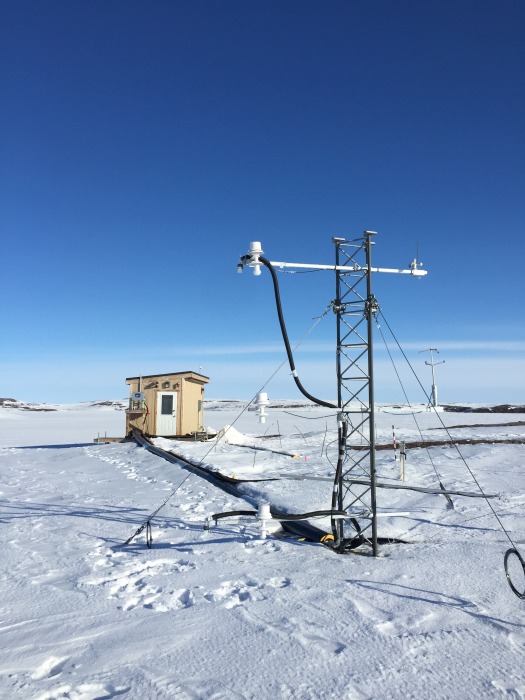 Mining operations, coal-fired plants, and other sources of mercury pollution worldwide have led to the deposition of the neurotoxic metal in the Arctic. The chemical mechanism behind this deposition is not completely understood.

Environmental scientists’ prevailing hypothesis is that Hg from man-made and natural sources travels through the atmosphere and collects in the Arctic primarily as Hg2+ that falls in rain and snow.

A study now finds that the primary source of the pollution is absorption of gaseous elemental mercury (Hg0) from the atmosphere, not Hg2+ from precipitation (Nature 2017, DOI: 10.1038/nature22997). Hg0 is more stable and lasts longer in the atmosphere, making it more subject to long-range transport, whereas Hg2+ is more reactive and shorter-lived in the atmosphere. The findings have implications for policies to reduce Hg pollution in Arctic ecosystems, which contaminates plants, fish, and mammals that native peoples rely on as food.

In the study, a team led by Daniel Obrist of the University of Massachusetts, Lowell, and the Desert Research Institute measured Hg levels in air, snow, plants, and soil at Toolik Field Station in northern Alaska and other sites for two years. They found that Hg0 accounted for about 70% of total Hg deposition in the ecosystem, with Hg2+ only a minor contributor.

The study shows that Hg0 accumulates in the tundra all year but to a greater extent in summer, when plants take up additional amounts directly from the atmosphere. The researchers also determined that Hg levels in Arctic soil are up to five times as high as levels in temperate regions. This is likely because warmer temperatures tend to release Hg from plants and soil and return it to the atmosphere.

“To take concrete steps to reduce Hg accumulation, one must understand how the metal moves around in the environment,” comments Hg biogeochemistry expert Carl Lamborg of the University of California, Santa Cruz. “This paper addresses that, adding to our predictive capabilities.”

Obrist notes that “in the U.S., we have several control regulations to reduce Hg and other air pollutants, yet many of these regulations are now stalled or disputed by the new Environmental Protection Agency leadership.”

Pollution
Mercury finds a long-term home in marine ooze
Environment
Cutting coal reduced atmospheric mercury in northeastern U.S.
Environment
Amount Of Mercury In Oceans Rises
Share X
To send an e-mail to multiple recipients, separate e-mail addresses with a comma, semicolon, or both.
Title: New details on mercury’s route to the Arctic
Author: Stu Borman
Chemical & Engineering News will not share your email address with any other person or company.

Comments
MICHAEL MCHENRY (July 17, 2017 12:14 PM)
My understanding of Hg toxicity is as methyl mercury not as elemental Hg. This is made by bacteria in ocean water
Reply »

Joseph E. Wreen (July 20, 2017 7:57 PM)
This finding was done by Canadians years ago. Methyl mercury is toxic but so is Mercury +2 salts. I still have a mercury compound to use on the skin to kill bacteria. The source of Mercury is meteors. It is also worth noting the tuna bones hundred of million of years also have high mercury level as do all top end predators. Thanks to meteors, the earth is growing at 0.25 an inch per year.
Reply »