How booze gets the blues 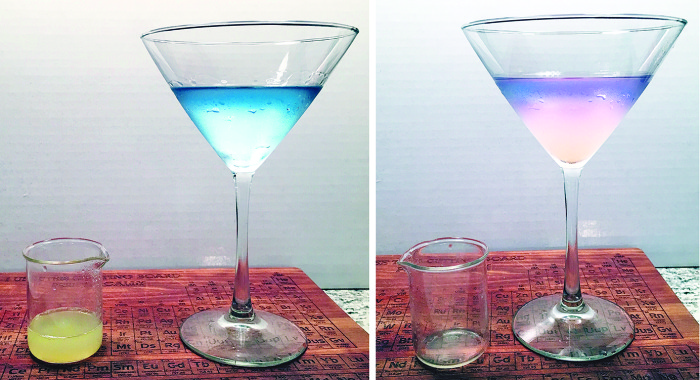 Cocktail connoisseurs that we are, the Newscripts gang couldn’t help but notice that a new blue hue has been tinting our tipples. In particular, blue gins, such as Ink and Sharish Blue Magic, have begun appearing on bartenders’ lists of intriguing intoxicants. These cerulean spirits do more than just satisfy our blue period: Add a squeeze of citrus and they turn purple or pink, helping get the perfect amount of acidic lime juice into a gimlet.

Liquids that change color by varying pH are common knowledge to chemists, of course. We all learned to titrate acid or base into a solution spiked with a color-changing indicator, such as pH-sensitive anthocyanins extracted from red cabbage leaves. 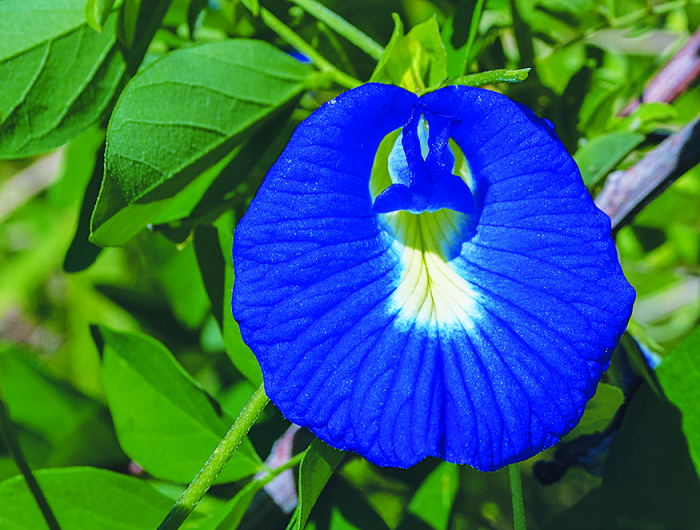 Anthocyanin coloring is also behind the new blue beverages, but these compounds don’t come from the common cabbage. Rather, they are sourced from the evocatively named Clitoria ternatea flower, also known as the butterfly pea, native to tropical equatorial Asia.

“You can make cabbage juice change colors, but it’s really hard to get enough in there and not have your moscow mule taste like cabbage,” says culinary scientist Ali Bouzari, cofounder of the food development company Pilot R&D. “The butterfly pea flower is a source of anthocyanin that doesn’t taste like much.”

Most of the butterfly pea’s vivid blue color comes from six acylated derivatives of the anthocyanin delphinidin. A team led by Norihiko Terahara of Minami Kyushu University first identified and characterized these back in the 1980s.

To use the butterfly pea to color cocktails or other colorless liquids, Bouzari suggests making a simple syrup by heating equal volumes of sugar and water and mixing in some of the dried flowers (available through Amazon!) while the sugar dissolves. The indigo syrup can then be used in the drink of your choice. “Shifting the pH slider back and forth, you can get into an endless sequence of cool stuff,” Bouzari says. 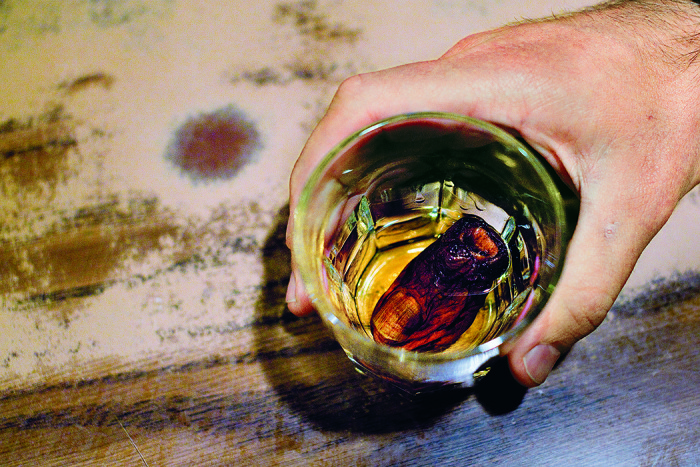 While cocktails colored with the butterfly pea are becoming increasingly common, there’s one potent potable that you’ll find only in the Yukon: the Sourtoe cocktail served at Dawson City’s Sourdough Saloon. Not for the faint of heart (or stomach), the drink features any 80-proof alcohol and a mummified human toe, which must touch the drinker’s lips but go no farther into the mouth. Swallowing the toe lands the drinker a $2,500 fine.

The Sourtoe made headlines last month when someone stole the signature toe. Fortunately, it was returned a few days later with a note of apology.

The cocktail has been around since 1973, when Yukon local Captain Dick Stevenson found a toe preserved in a jar of alcohol and brought it into the saloon, dropping it into the drinks of any brave bargoer who would have the garish garnish (maraschino cherries are presumably hard to come by in the Yukon).

The original toe came from a miner and rumrunner named Louie Liken, who lost it to frostbite in the 1920s and preserved the digit in the jar later found by Stevenson. Over the years a total of eight toes have been used in the cocktail. An article in Atlas Obscura tells how one toe “arrived in a jar of alcohol with the message, ‘Don’t wear open-toe sandals while mowing the lawn.’ ”

Salt curing preserves the toes and keeps bacteria at bay. The Newscripts gang reached out to New York University’s Marion Nestle, an expert in food safety and public health, to inquire about health hazards. “Yuck” was her reply. “I doubt it’s harmful at this point, but why would anyone want to drink this?”

The Sourdough Saloon’s toe master, Terry Lee, told National Public Radio that he is in need of digit donations. “Right now we don’t have any big toes,” he said. “If anybody out there has an extra big toe, we would really like it.”

Comments
Lisa (July 18, 2017 3:55 AM)
Thank you for a very insightful article Bethany.
Butterfly Pea Flowers are packed with antioxidants such as Proanthocyanidin and Anthocyanin which stops the harmful effects of free radicals. This helps to improve overall cell health by perventing premature aging, cutting the risk of cancer and other diseases. Proanthocyanidin is one of the most powerful antioxidants as it is able to increase the collagen and elasticity in skin cells. There are lots of similarities between blue tea and white/green tea in terms of health benefits. Blue teas such as Bluechai Tea are said to have the added benefit of improving eye health and hair strength.
Reply »

In the meantime, I need to go sell a fridge to some Inuit.
Reply »

Paul (July 19, 2017 1:17 PM)
As Member No. 41152 of the Sourtoe Cocktail Club, I can attest to the fact that, while the toe may be disgusting, the drink is perfectly fine as long as one chooses a decent alcoholic beverage such as a good Irish whiskey to accompany one's becoming part of a unique tradition.
Reply »

huiray (July 19, 2017 8:02 PM)
Clitoria ternatea flowers have been used for a long time in the cuisines of SE Asia, including southern regions of China, and the use of acidic agents like lime juice to change its color has been utilized in those cuisines for yonks. It would have been nice if the author had also mentioned it, not merely say that it is native to the region.

They are used in Ayurvedic medicine in India, in the cuisines of Thailand, Indonesia, China, etc etc.

Sara Sutcliffe (July 20, 2017 10:48 AM)
Unfortunate though logical name for the flower. Are they available to grow here or are they considered too invasive? I do find them very pretty. As for the digit in the drink, I think I'll pass on that one.
Reply »

Bob Durrwachter (July 21, 2017 4:11 PM)
I have grown the vines successfully in northern Iowa (USDA zone 5)as an annual. I pre-start them in April and set them out in mid-May. They have just started blooming this past week and will flower until frost. They will even make seeds for next year. There are a number of on-line seed sources. I grow them in containers as I have found that warms up the roots and gets them blooming sooner. Now I need to try eating them.
Reply »

Bernard Peek (March 15, 2018 10:53 AM)
A cocktail called a Pangalactic Gargleblaster was mentioned in Douglas Adams the "Hitchhikers' Guide to the Galaxy." For the launch of a stage play based on the stories the cocktail waiter of the Cafe Royale in London was asked to design such a cocktail. The result was a drink including Blue Curacao. The last stage of preparation was to add a single cocktail onion. As the vinegar leached out of the onion the drink became green and finally yellow.
Reply »