Ultralight and exceptionally strong, graphene aerogels are attractive materials for use as catalysts, electrodes, and flexible electronics. But one property that’s needed for those applications has been hard to impart to the materials: elasticity. Researchers have now overcome that hurdle by making a squishable graphene aerogel that mimics a bendable aquatic plant’s highly ordered inner porous structure (ACS Nano 2017, DOI: 10.1021/acsnano.7b01815).

[+]Enlarge
Credit: ACS Nano
The graphene aerogel bounces back after being squished by an object more than 6,000 times its weight. 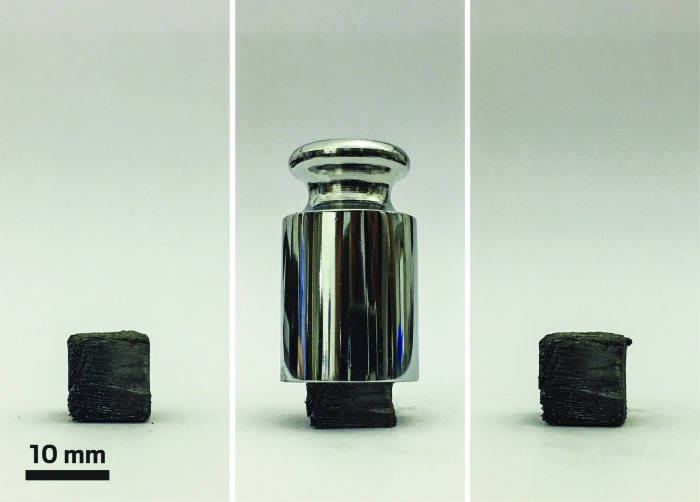 Credit: ACS Nano
The graphene aerogel bounces back after being squished by an object more than 6,000 times its weight.

The new, conductive aerogel springs back to its original shape after being squeezed to half its size with an object more than 6,000 times its weight. The aerogel retains 85% of its original strength even after being squeezed more than 1,000 times. In comparison, typical aerogels with random pore structures that the researchers made and tested lost more than half their strength after just 10 compression cycles.

Combining low density, strength, superelasticity, and conductivity in an aerogel requires carefully designed, ordered structures, says Hao Bai of Zhejiang University. He and his colleagues took inspiration from Thalia dealbata, an aquatic plant with strong and flexible stems that allow the plant to withstand wild winds. The stems are built out of concentric layers of 100- to 200-µm-diameter structural tubes, connected to each other by thinner, 1-mm-long bridges that act like springs.

The researchers sought to replicate the plant’s properties with a similar structure in an aerogel. They made a cube of graphene aerogel, 10 mm on a side, using a specialized freezing technique for creating structured porous materials that Bai helped develop in 2015 while at Lawrence Berkeley National Laboratory. The method uses ice as a template to freeze a suspension of graphene oxide such that parallel graphene oxide sheets form, connected by bridges as in T. dealbata. Freeze-drying and warming the sample transformed the material into graphene, producing the aerogel.

In addition to being strong and elastic, the material is highly conductive, considering its low density, Bai notes.

This is a clever, low-cost, and scalable freezing process to generate a new aerogel microstructure, says Peter Pauzauskie of the University of Washington. The microstructure “would be very expensive and difficult to achieve” using other methods, including three-dimensional printing, he says.

Nanomaterials
Microscopic carbon pillars are stronger than diamond yet elastic
Materials
Lightweight ceramic aerogel stands up to high heat
Nanomaterials
Aluminum oxide nanocardboard is strong yet bendable﻿﻿﻿﻿﻿﻿﻿
Share X
To send an e-mail to multiple recipients, separate e-mail addresses with a comma, semicolon, or both.
Title: Plant inspire exceptionally strong and elastic graphene aerogels
Author: Prachi Patel
Chemical & Engineering News will not share your email address with any other person or company.