In reference to the main competing biophysical hypothesis of magnetoreception (biological precipitation of ferromagnetic minerals like magnetite) Peter Hore states, “Very little evidence has emerged over the past 15 years that supports that as the basis for a compass in birds.”

Well, as one of the originators of the ferromagnetic hypothesis, I beg to differ. It is not just birds, it is a large variety of microorganisms and animals, including birds, that have this magnetic sense. The definitive test of a ferromagnetic receptor based on single-domain (SD, uniformly magnetized particles) is the pulse-remagnetization experiment, in which you apply a brief, unidirectional magnetic pulse of about a mS in duration, configured to exceed the coercive force of the SD particles and reverse the orientation of the magnetic moment wrt to the crystal axis (typically, a pulse few tens of mT is adequate). That produces a permanent flip in magnetization direction, the same way information is coded on magnetic tape. Magnetotactic bacteria, exposed to such a pulse, reverse their magnetic swimming directions passively. There are now over 16 peer-reviewed papers in which this experiment has been applied to animals, including birds, all which show clear and lasting effects of the pulse. Such a pulse would have no lasting effect on a quantum compass.

There may be interesting magnetic effects on chemical reactions, but the evidence that they are involved in magnetoreception is frankly not convincing. 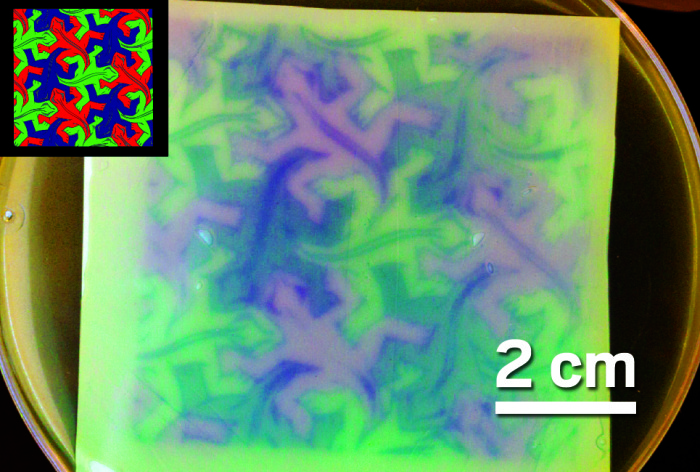 “Paint by microbe” (May 29, page 11) is a visual reminder that science is an art. One striking element is, however, missing from M. Torrice’s write-up: To illustrate their findings, the researchers opted for an image of a famous recurring theme from the artist M. C. Escher (part of his series on tessellation). A much apropos choice from the MIT team for an Escherichia coli “painting.”

This is in response to “When two drugs are better than one” (May 29, page 7). The concept [that] two or more plant constituents when administered together enhance the desired therapeutic effect (scientific term, synergy) has been known for centuries in the Indian Ayurvedic and traditional Chinese systems of medicine. While modern medical practice has been slow in recognizing merits of such combination drug therapy, thanks to better understanding of its underlying principles through computer-generated theoretical models and newer analytical technologies, synergy research with anticancer plant products and conventional drugs is now an active area for developing new cancer therapy.

The benefits of synergism include increasing the efficacy of therapeutic effect, decreasing dosage without compromising efficacy, mitigating or obliterating toxic side effects, and minimizing or delaying the induction of drug resistance. Recent examples: curcumin (a yellow diketo polyphenol) from turmeric powder and betanin (a red anthocyanin glycoside) from red beetroot acting synergistically when coadministered with standard cancer drugs, such as doxorubicin and cisplatin. Further, they provide adjuvant therapeutic remedy for the toxic side effects of these potent anticancer drugs (see our article, J. Complementary Integr. Med. 2013, DOI: 10.1515/jcim-2013-0007).

I thoroughly enjoyed your interview with Manu Prakash (April 17, page 28) and a glimpse at his “make it yourself” (of cardboard) approach to analytical tools.

This reminds me of an unusual book, “The Golden Book of Chemistry Experiments” by R. Brent with charming illustrations by H. Lazarus, which describes a chemical laboratory for teenagers using coat hangers for ring stands and test tube racks; old ink bottles for alcohol lamps; pickle jars for beakers; flashlight batteries for electrolysis; and homemade litmus, starch-iodide, and turmeric test papers. A balance was shown as being constructed from a tin can and string, with coins used as weights. Chemicals were obtained from the laundry room or neighborhood drugstore.

If “mom” were supportive, the kitchen table could be put into service as a lab bench, although some experiments were suggested as being conducted outdoors. A hydrogen bomb was erroneously indicated as being possible by scaling up the experiment for hydrogen generation. As one reviewer wrote: “Nothing bonds parent and child as much as almost blowing up the garage together”!

The first edition came out in 1960 and a revised edition was published in 1963. The book was banned almost immediately by the U.S. government as being too hazardous for kids. No eye or hand protection is indicated for any experiment. Evidently only a few hundred copies still exist and fall into the category of very pricey rare books. Boys and girls are both shown as budding chemists on nearly every page in a nod to gender equality.

Thanks to a benefactor, the complete book with its over 200 experiments, many classics in the history of chemistry, is available as a free, downloadable PDF on Google.

Pollution
UN human rights specialist Baskut Tuncak weighs risks of workplace hazards and chemical pollution
Persistent Pollutants
Why limiting PFAS in drinking water is a challenge in the US
Recycling
Perstorp leads push for tighter mass balance rules
Share X
To send an e-mail to multiple recipients, separate e-mail addresses with a comma, semicolon, or both.
Title: Reactions
Author:
Chemical & Engineering News will not share your email address with any other person or company.