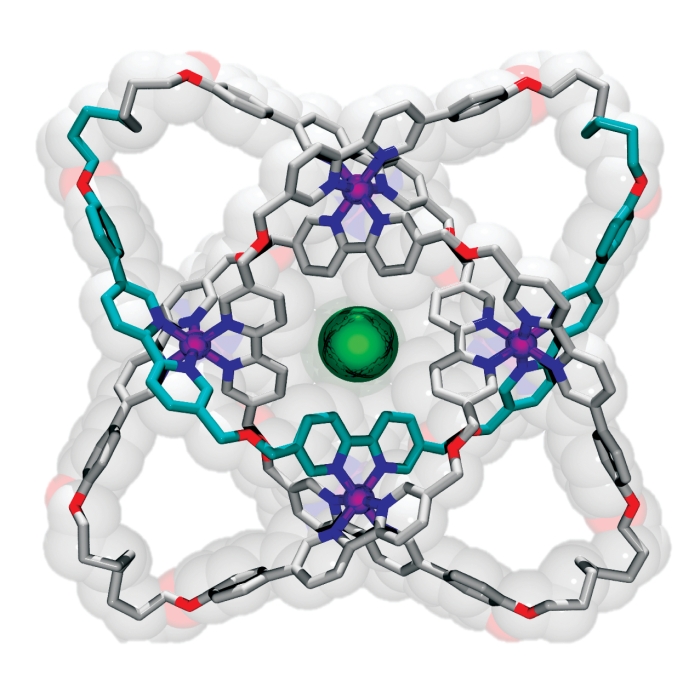 Braiding—the interlacing of three or more strands—seems fairly straightforward, but as any parent of a long-haired child will tell you, it takes skilled hands to master the technique. Braiding a molecule poses an even greater challenge because no hands are nimble enough to entwine structures on such a small scale.

Using iron atoms to guide their molecular building blocks, chemists have now constructed the first braided knot (Science 2017, DOI: 10.1126/science.aal1619). This new knot, crafted by David A. Leigh and coworkers at the University of Manchester, is considerably more complex than previous examples of molecular knots, which were based on just two twisted strands.

The chemists heated the metal-ligand mixture, allowing it to arrive at its thermodynamic minimum, which corresponds to the braided structure. They then used metathesis chemistry to link olefins at the ends of the ligand strands together to produce the knot. The tough part, Leigh says, is designing the ligand strand so that it will coordinate the iron ions and so that the strand ends will meet up in just the right way.

“It looks like magic, but it’s not,” says Alberto Credi, an expert in supramolecular chemistry at the University of Bologna, of the synthesis. “This work is an impressive demonstration that sophisticated structural programs can be executed by self-assembly through a careful design.”

“This is the long-awaited step into totally new molecular knots,” adds Amar Flood, an expert in self-assembly at Indiana University Bloomington. “The design with circular helicates is elegant and expedient, and the execution masterful.”

Once the knot structure is assembled, the chemists remove the iron ions, as well as a chloride ion the structure sequesters at its center, to generate a metal-free knot. This molecule, Leigh points out, is chiral. Despite having no chiral centers, it can be made in two distinct forms that are nonsuperimposable mirror images of one another that can be separated using chiral chromatography.

Leigh hopes to use what his group learned from making the braided knot to create even more complex braided knots and possibly even woven polymers. “What we’re really interested in doing is finding general ways that could be used to make whatever sort of knot that you want. There are six billion knots that have been tabulated by mathematicians, and chemists have only been able to make three of them up to now. This is the fourth,” he says. “Clearly there’s a huge unexplored area of chemical space out there.”

Share X
To send an e-mail to multiple recipients, separate e-mail addresses with a comma, semicolon, or both.
Title: Braiding a molecular knot
Author: Bethany Halford
Chemical & Engineering News will not share your email address with any other person or company.

Comments
Prof. V.I.Sokolov (January 19, 2017 4:57 AM)
Dear Colleagues,
The principle of the construction around the metal in octahedral complexes had been proposed by myself in 1973 (Russ.Chem.Revs) and then within my book "Introduction to Theoretical Stereochemistry", Russian version, Moscow, 1979, updated English translation, Gordon @ Breach, London, 1991. This has been recognised by J-P. Sauvage in the first publications leading to Nobel Prize. In one of previous papers David Leigh referred to my work, but not here where his team reached the big success.
Probably, he did not expect that I am still acting scientist.
Viacheslav I. Sokolov, Institute of Organoelement Compounds, Moscow, Russia
Reply »

Ivan Hong (January 25, 2017 1:18 PM)
Your idea however original, is not something that any skilled chemist wouldn't be able to come up with. Ideas are cheap, it is the execution that should be prized. A little modesty Mr. Sokolov.
Reply »