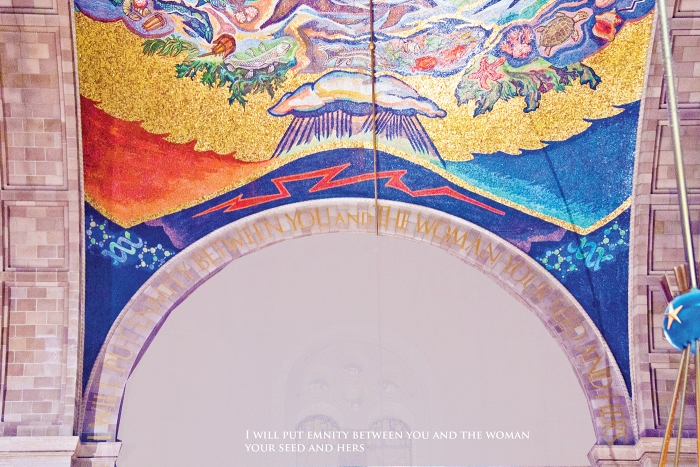 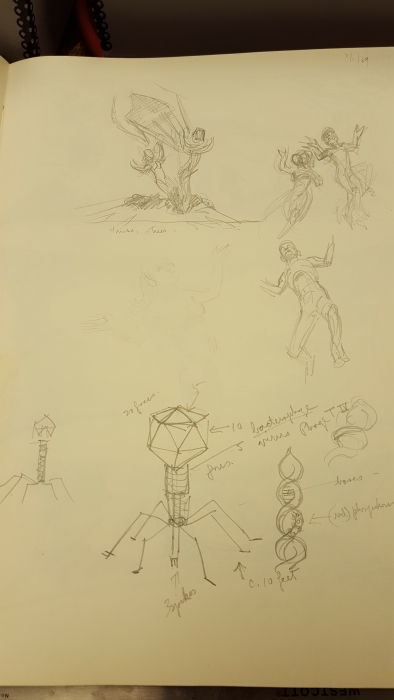 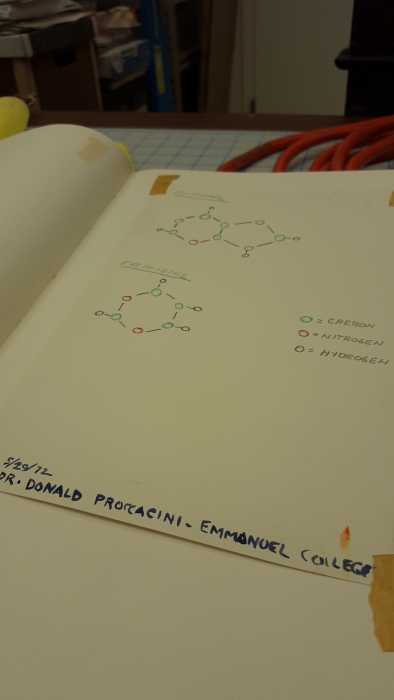 Walk into the Basilica of the National Shrine of the Immaculate Conception in Washington, D.C., and you’re struck by grandeur.

The basilica itself is the largest Catholic church in North America and boasts the largest collection of contemporary ecclesiastical art in the world, says archivist-curator Geraldine M. Rohling, including more than 7,000 m2 of mosaics.

The centerpiece is “Christ in Majesty,” one of the world’s largest mosaics of Jesus. It depicts a blonde, Byzantine, chiseled Jesus resplendent in red and gold. It’s so imposing that you’d be forgiven for overlooking three small chemical figures in another nearby mosaic.

This piece, entitled “The Creation,” is itself grand and sweeping, showing Adam and Eve surrounded by an assortment of birds, sea creatures, and land beasts, including dinosaurs.

But tucked into the mosaic’s corners are three symbols representing biomolecular building blocks of life on Earth: a double helix and the structures of purine and pyrimidine. Putting science and religion into the same sentence can be perilous even today; yet, more than 40 years ago, an artist named Mary Reardon featured both in a mosaic that decorates the church’s ceiling.

To help explain the mosaic’s meaning, Rohling shares Reardon’s own words: ​“ ‘The Creation’ displays not only the six biblical days of God’s creation according to the Book of Genesis, but also the relationship of modern science to this miracle.”

After Reardon died in 2001, her family donated several of her notes and sketchbooks to the basilica. Rohling let the Newscripts gang page through some of these on a recent visit. Never have we felt more ashamed of our old lab notebooks.

Reardon kept immaculate notes on the mosaic project, which spanned about four years around 1970. The notes revealed an artist with an intense curiosity for the science that she showcased. She relied on biologists and wildlife experts to accurately depict the mosaic’s creatures, big and small. For instance, on a page where Reardon practiced her double helix, she also sketched a beautiful bacteriophage.

But our favorite page contains drawings of the heterocyclic organic compounds that would adorn her completed mosaic. At the bottom of that page, a note acknowledges Donald Procaccini of Emmanuel College, a professor of art and biology, who likely served as Reardon’s contact for chemistry fact-checks.

“She spent a lot of time on that,” Rohling says of Reardon’s commitment to scientific accuracy. “She wanted to be sure she had it right.”

A talk so bad, it’s good

[+]Enlarge
Credit: Shutterstock/C&EN
Want to play a game?: When it comes to Bad Talk Bingo, even when you’re winning, you’re losing. 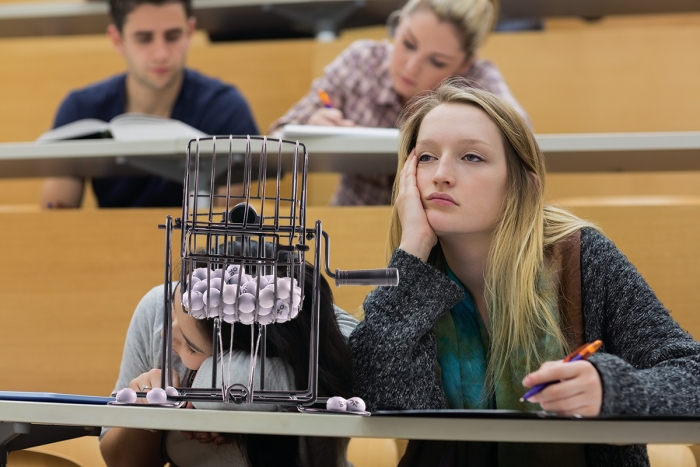 Credit: Shutterstock/C&EN
Want to play a game?: When it comes to Bad Talk Bingo, even when you’re winning, you’re losing.

The bad news is that we’re now plunging from heavenly art into the hellishness of bad seminars. The good news is that this scourge is being fought by David S. Sholl, chair of the school of chemical and biomolecular engineering at Georgia Tech, albeit in an unorthodox way.

Sholl has created a half-hour talk titled “The Secrets of Memorably Bad Presentations,” a tour de force replete with excessive ums, technical difficulties, and abhorrent time management. The intent, however, is not to mock the unskilled, but rather to remind everyone that they can give good presentations—even people who aren’t naturally gifted speakers.

Presenters must simply plan and practice, Sholl says. “It’s not fun to do,” he concedes. “But it is easy to do.” Still, should readers find themselves needing a way to tough out a less-than-divine presentation, Sholl has also created Bad Talk Bingo cards. Simply tick off boxes with annoying talk habits as you witness them until you get five in a row. Visit his website to get your own card …just don’t tattle on us if you get caught using one.

Education
A Chemist’s Drama, ‘The PHD Movie’ Sequel
Physical Chemistry
The Role Of Myths
Biological Chemistry
Deciphering The Magic Of Reality
Share X
To send an e-mail to multiple recipients, separate e-mail addresses with a comma, semicolon, or both.
Title: Ecclesiastical chemistry and preaching proper presentation
Author: Matt Davenport
Chemical & Engineering News will not share your email address with any other person or company.