Nanotechnology could bring us a whole new “power suit”

[+]Enlarge
Credit: Will Ludwig/C&EN
Advances in nanotechnology are making it possible to power small electronics with things we wear. 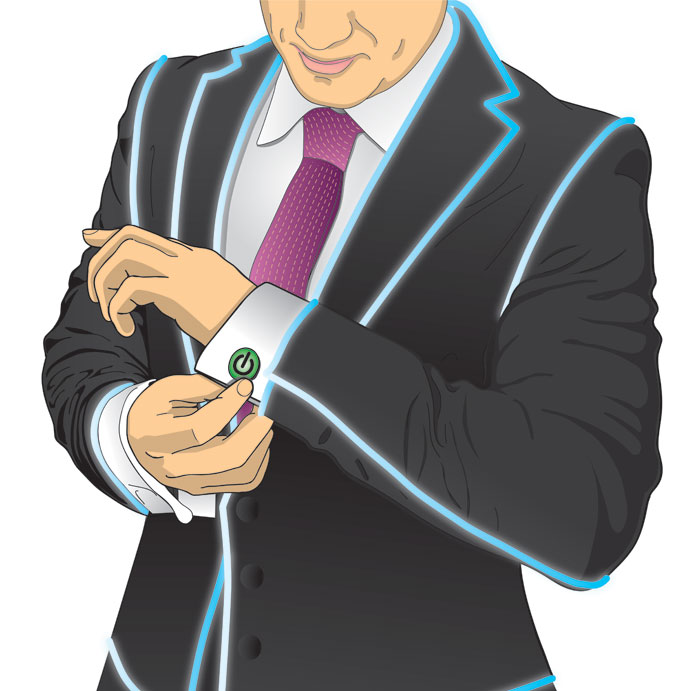 Credit: Will Ludwig/C&EN
Advances in nanotechnology are making it possible to power small electronics with things we wear.

Thanks to the work of some scientists and ­engineers, we may soon see literal “power suits” in fashion departments. Clothing, shoes, and other wearable devices could collect energy from movement—such as walking, running, or biking—allowing us to charge sensors, lights, smartphones, and even medical implants simply from our daily activity. Think of it as fashion for the fidgety.

The technology used to harvest this energy is based on two well-known phenomenon: piezoelectricity and the triboelectric effect. Piezoelectric materials interconvert electrical signals and mechanical force: Move a piezoelectric material and it generates electricity. The triboelectric effect arises when opposite charges collect on two dissimilar materials after the materials come into contact with one another. It’s what happens when you shuffle across a wooden floor in woolen socks and then get an electric shock.

Although these phenomena have been known for well over a hundred years, being able to generate enough electricity from piezoelectric materials or the triboelectric effect to reliably power anything has been a challenge. But thanks to developments in chemistry, nanotechnology, and materials science made over the past decade, researchers have been able to create devices that do just that.

Scientists working in the field envision sticking such devices anywhere there’s motion, such as on the blades of windmills or in giant nets moving in ocean currents. But consumers will most likely encounter the technology first in something they can wear, says Zhong Lin Wang, a pioneer in the field and a professor of nanoscience at Georgia Institute of Technology.

For example, Wang envisions the technology being used in a device an elderly person might wear that could detect when they’ve had a fall. Such a device, he says, would be an improvement over current technologies that require the wearer to press a button when there’s been a fall. That’s not always possible, Wang explains.

“Energy harvesting is about gathering small amounts of energy that are really there for the taking,” says Sohini Kar-Narayan, an expert in materials science and nanogenerators at the University of Cambridge. She and other researchers working on these technologies see these tiny energy sources all around us.

Materials with some spark

In 2006, Wang reported that arrays of zinc oxide nanowires behaved like tiny power generators (Science 2006, DOI: 10.1126/science.1124005). He went on to create a whole new field—called piezotronics —and has built myriad devices that harvest energy from small motions based on the piezoelectric properties of ZnO.

Piezoelectricity also sparked Canan Dagdeviren’s interest in science as a youngster. Dagdeviren, who recently joined the faculty at Massachusetts Institute of Technology’s Media Lab, recalls that her parents fostered her budding scientific curiosity by giving her a book on Marie Curie. “But when I read the book I fell in love with her husband Pierre Curie, who discovered piezoelectricity,” she says. “This mechanism was so magical to me that I decided to study physics.”

Piezoelectricity arises when deforming certain crystalline materials disrupts the balance of electric dipole moments within the materials. This creates a voltage across the material. Familiar piezoelectric materials include quartz and sucrose. 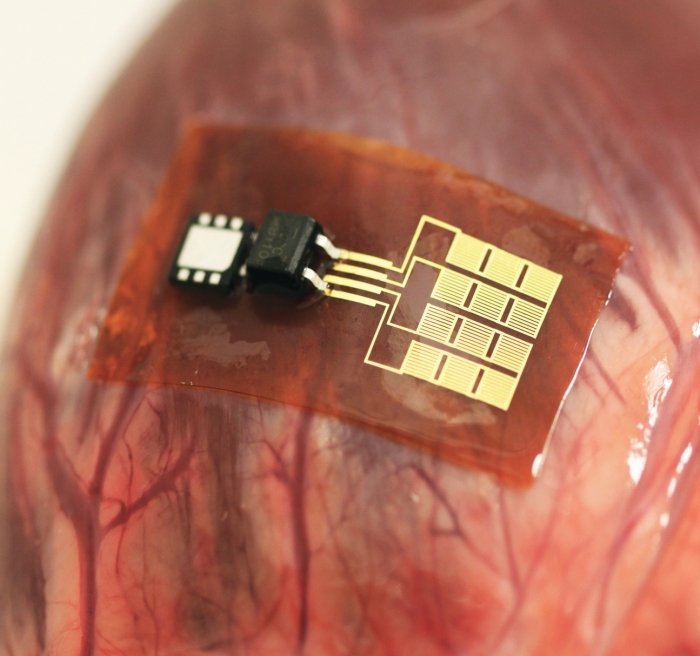 Dagdeviren decided to apply her scientific know-how to help cardiac patients after learning that her grandfather had died from heart failure when he was only 28. As a graduate student in John Rogers’ lab at the University of Illinois, Urbana-Champaign, Dagdeviren developed piezoelectric devices that harvest energy from the small movements of internal organs, such as the heart, lungs, and diaphragm (Proc. Natl. Acad. Sci. USA 2014, DOI: 10.1073/pnas.1317233111).

The piezoelectric material in the devices is a 500-nm layer of lead zirconate titanate sandwiched between even thinner electrodes made from precious metals. The devices generate four times the electricity needed to power a pacemaker, Dagdeviren says. Batteries that currently power pacemakers have to be replaced every seven to eight years, which requires surgery. Eliminating those batteries or extending their lifetimes with motion-harvesting devices, she notes, would cut down on costly and traumatic surgeries.

But Dagdeviren recognizes that there are inherent difficulties in implanting something in the body. So at the MIT Media Lab, she plans to use similar devices to create knee and elbow patches as well as underwear that can harvest energy from movement and transmit it wirelessly to a pacemaker or other implant. The same garments could also be used to power small electronics, such as smartphones, or for military applications. 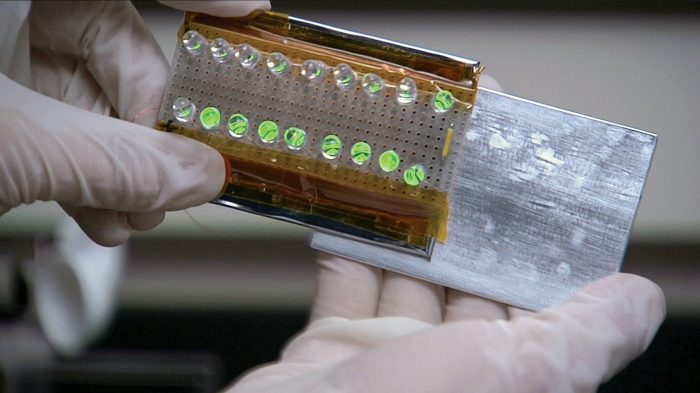 Kar-Narayan agrees such devices would be great for helping to reduce our reliance on batteries. While our small electronic devices are getting smaller, she says, the batteries that power them have not managed to shrink at the same pace. Batteries account for up to 30% of a device’s weight, Kar-Narayan points out.

The other area where Kar-Narayan sees energy-harvesting potential is with triboelectric nanogenerators—wherein motion causes two dissimilar materials to rub together to create static electricity.

Energy harvesting is about gathering small amounts of energy that are really there for the taking.
Sohini Kar-Narayan, materials science and nanogenerators expert, University of Cambridge

“The trick is really to pair materials such that one is likely to donate electrons and one is likely to accept electrons,” she says. “The nice thing about it is that there is nothing particularly special about the materials. Any material is likely to be triboelectric and it’s up to materials scientists to find ways to enhance the surface area, the surface charge density, or a combination of the two.” For example, she says, nanostructured surfaces can increase surface area and therefore produce more charge for the same amount of mechanical energy.

Researchers in Wang’s lab at Georgia Tech were the first to make triboelectric nanogenerators that harvest energy from motion. They came up with the idea by accident, Wang says. One of his students was working with a piezoelectric nanogenerator and found the output was three times larger than what was expected. Wang says he assumed it was an artifact and ignored it. But over the course of a couple of years, two more students reported the same spike in output.

“We did a very careful analysis,” Wang says. They traced the issued to an incorrect assembly that allowed two polymer surfaces to rub together. They then spent the next six months testing materials and designs until they’d come up with their first triboelectric nanogenerator (Nano Energy 2012, DOI: 10.1016/j.nanoen.2012.01.004). 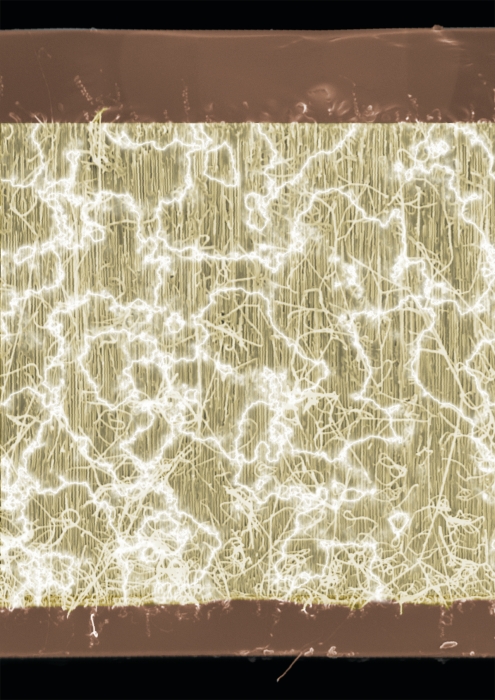 Since then, they’ve built many different devices that incorporate the triboelectric nanogenerators, including shirts with pockets of the power-generating material, whistles, foot pedals, floor mats, backpacks, and even a single thread. The nanogenerators in these devices typically consist of two different layers of materials assembled on top of each other. Motion, such as that created when someone steps on a mat, causes the layers to touch and build up charge through the triboelectric effect. Electrodes on each layer then conduct that charge.

Wang is particularly excited about a triboelectric energy-harvesting device his lab built using a polydimethylsiloxane film and a polyethylene terephthalate film inside a shoe (Nano Energy 2013, DOI: 10.1016/j.nanoen.2013.03.001). He’s working to use the device to power a global positioning system in footwear. Such shoes could be a boon to hikers and runners and could help track down people who might get inadvertently lost, such as Alzheimer’s patients. To date, the nanogenerators in the shoes still function after 3 million steps—well within the lifetime of an athletic shoe. Wang says he thinks they’ll be on the market in a few years.

Trisha Andrew, a chemistry professor at the University of Massachusetts, Amherst, who develops wearable electronics, agrees that consumers are likely to see triboelectric nanogenerators within the next few years. “This work has been progressing incredibly fast,” she says.

Andrew works on using off-the-shelf textiles to create triboelectric nanogenerators. For example, she recently created one by fuctionalizing cotton with a layer of fluoroalkylated polymeric siloxanes just a few hundred nanometers thick. She then paired it with pristine nylon cloth (Adv. Mater. Technol. 2016, DOI: 10.1002/admt.201600147). 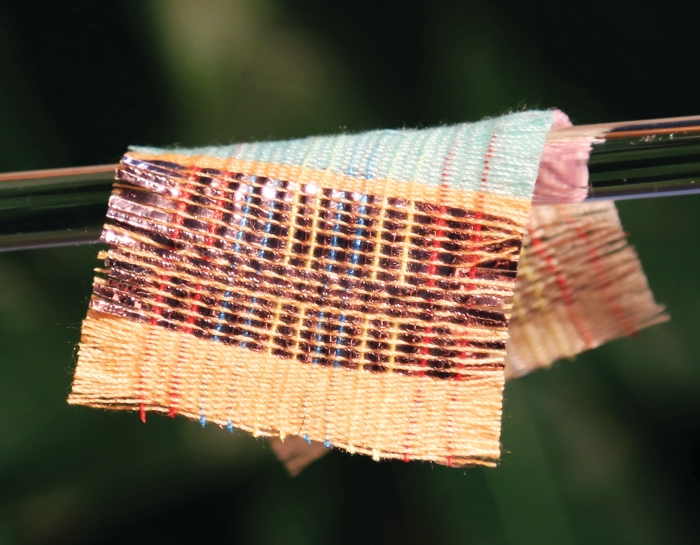 Credit: Georgia Tech
This fabric, created in Wang’s lab, can harvest electricity from motion and sunlight.

Her decision to work with off-the-shelf textiles helps her address one of the first questions she gets when she presents the idea of wearable electronic technology to potential investors: Will it work with fabrics already in production? It’s just easier for manufacturers, she explains, if they don’t have to change that part of their process.

The second question she’s usually asked is how laundering and sweat will affect her devices. Andrew says that she thinks most consumers have become fairly savvy about laundering highly engineered fabrics, such as those you find in high-end outerwear. Consumers know to wash the material on a gentle cycle in cold water and to never put it in the dryer. But Andrew does think sweat and humidity pose potential challenges to makers of wearable triboelectric nanogenerators. Another challenge, she says, is seeing how stable these devices will be in the rain and snow.

Wang thinks the biggest challenges facing energy-harvesting devices will be to improve their performance and to figure out how to integrate them with current technology.

When these devices do find their way into the market, scientists say they could make quite a dent in energy use, even though they’re just powering small electronics.

Whether it’s riding waves, in running shoes, or on runways, motion generated power is clearly on the move.