Link between plant emissions and superbugs is getting attention, though some industry pushback continues 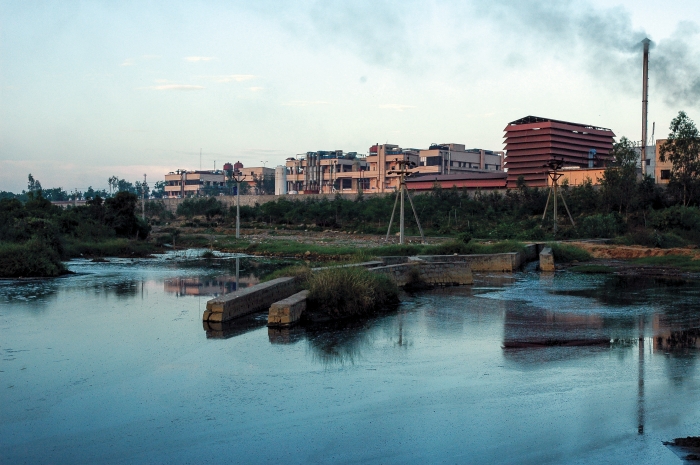 Credit: Jean-François Tremblay/C&EN
A reservoir collects water from nearby pharmaceutical plants in Patancheru, India. The area is notorious for high levels of antibiotics in its water.

In October 2014, DSM Sinochem Pharmaceuticals stood alone among antibiotic companies in its willingness to blame antibiotic manufacturers for their contribution to the rise of antimicrobial resistance.

The environmental issue has a rising profile.

▸ September 2007: Joakim Larsson of the University of Gothenburg and colleagues describe high concentrations of antibiotics in water discharged by pharmaceutical plants in Patancheru, India. Larsson publishes additional papers on the issue in subsequent years.

▸ February 2015: A high-profile study sponsored by the U.K. government lists environmental dumping of antibiotics as a cause of antimicrobial resistance.

▸ June 2015: SumofUs publishes a report accusing major drug firms of sourcing bulk antibiotics from Chinese and Indian firms that dump their waste in the environment.

▸ September 2016: Thirteen drug companies pledge not to dump antibiotics in the environment or source from companies that do.

Since then, the issue has rapidly risen in prominence. Last September, a dozen drugmakers pledged to address the problem. Pressure has also been building on drug retailers to source antibiotics more responsibly.

“We have been saying that it’s not only doctors and agriculture that are responsible for antibiotics resistance, but also pollution,” says Karl Rotthier, the chief executive officer of DSM Sinochem, a Sino-European manufacturer of bulk antibiotics. “Our claims are now getting a lot of traction.”

The United Nations ranks microbial resistance to antibiotics as one of the planet’s top health challenges. Although the problem is generally blamed on excessive antibiotic use in the raising of livestock and overprescribing by doctors, a third, less-cited contributor is environmental emissions of antibiotic-rich wastewater by drug manufacturers. Activists, scientists, and some companies have made much progress in highlighting the role that manufacturing emissions play in the creation of superbugs. But so far, most bulk antibiotic producers have not got on board.

The companies that have agreed to do something about the problem, a coalition of 13 firms, signed a pledge to control their emissions, work to improve their suppliers’ environmental performance, and help ensure that antibiotics are consumed only by patients who need them.

The signatories include international drugmakers such as GlaxoSmithKline and Novartis, which are big purchasers of bulk antibiotics, and two Indian antibiotic producers, Cipla and Wockhardt. Rotthier credits a landmark review of antimicrobial resistance published in 2015 by the U.K. government for spurring formation of the coalition.

[+]Enlarge
Credit: Shutterstock
Excessive use of antibiotics in agriculture is one, but not the only, source of antimicrobial resistance. 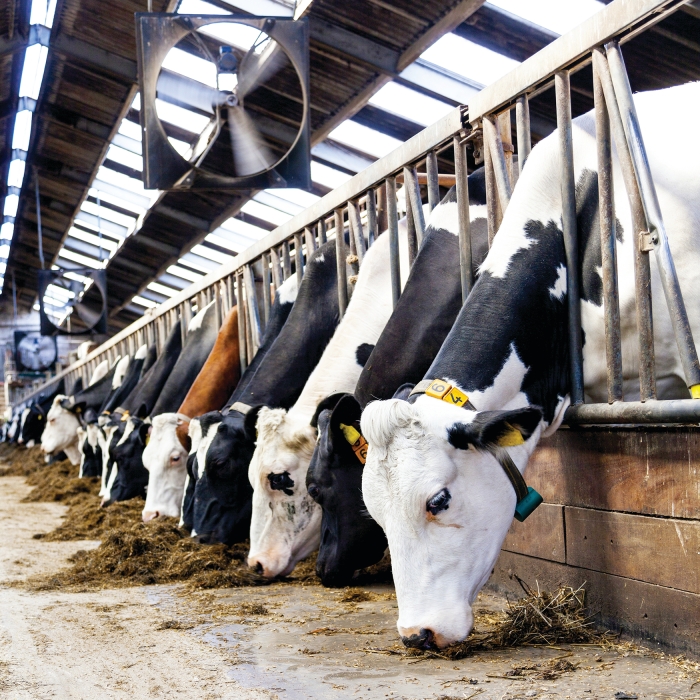 Credit: Shutterstock
Excessive use of antibiotics in agriculture is one, but not the only, source of antimicrobial resistance.

In the U.S., the problem of environmental dumping of antibiotic waste is also gaining attention. Waxman Strategies, a group led by former congressman Henry A. Waxman, urged the U.S. Food & Drug Administration last fall to lobby regulators in foreign countries, especially India and China, to crack down on pollution from pharmaceutical plants. The group is also calling on all pharmaceutical firms to sign the pledge.

Waxman’s campaign coincided with the publication by a U.K.-based nongovernmental organization, Changing Markets, of a study describing the harm caused by antibiotic dumping. The report detailed the outsize presence of drug-resistant bacteria near antibiotic plants in India and noted that the problem goes beyond local impact. Through air travel, a patient infected by a superbug in India could rapidly infect others around the world.

Fixing emissions by manufacturers is the “low-hanging fruit” in the fight against antibiotic resistance, claims Glenn Hurowitz, managing director of Waxman Strategies. “A few factories worldwide make most of the world’s antibiotics,” he notes.

Manufacturers can clean up their antibiotic-laden emissions at a modest cost, DSM Sinochem’s Rotthier argues. For an average-sized plant, the cost could be as little as $2 million, he says. DSM Sinochem claims that all its manufacturing locations worldwide—in China, India, Europe, and Mexico—do not emit detectable traces of antibiotics.

DSM Sinochem took steps to clean up its emissions out of a sense of corporate social responsibility, Rotthier says. That said, the company now heavily promotes its status as a “sustainable” antibiotic producer. It also points out that continued unchecked emissions threaten the legacy of the antibiotic industry.

It may not be very costly for other antibiotic producers to control their wastewater emissions, but some are likely to resist doing so until forced. For instance, Changing Markets researchers found that bacteria in water near a plant in Polepally, India, run by the Indian antibiotic producer Aurobindo Pharma was completely resistant to several antibiotic families including cephalosporins, carbapenems, and fluoroquinolones. Like most countries, India has no laws specifically regulating antibiotic emissions.

In the past, when confronted with legal action, Aurobindo has resisted. For instance, in 2012, it fought an order from the Andhra Pradesh Pollution Control Board—which itself was following an order from the Supreme Court of India—to close a plant that was polluting excessively. The company instead claimed that its plants were among the cleanest in the state. It didn’t respond to C&EN’s request for comment.

Mark Holmes, a senior lecturer in veterinary preventive medicine at Cambridge University who helped research the Changing Markets report, argues that it will require new regulations to stop companies from dumping antibiotics in the environment. It’s encouraging that DSM Sinochem and others are voluntarily controlling their emissions, but “the companies that signed already had clean facilities,” he says. New regulations, he adds, should be conceived so that a country’s domestic manufacturers and offshore suppliers are treated equally.

Joakim Larsson, a professor and director of the Centre for Antibiotics Resistance Research at the University of Gothemburg, agrees that regulations will be required to stop antibiotic dumping. “It is of course good that a few companies finally pay attention to this,” he says, “but basically, I think they want to be at the steering wheel when defining discharge limits.” Larsson has been studying the link between superbugs and antibiotic manufacturers’ discharges for more than 10 years.

It will take more research to convince regulators to act on antibiotic dumping, Holmes expects. “The industry and government will turn a blind eye until the link between superbugs and antibiotic dumping is absolutely proven,” he says.

Although the study on which Holmes worked with Changing Markets measured levels of drug-resistant bacteria in water samples taken near antibiotic plants in India, the researchers did not measure whether the water in fact contained antibiotics, he notes. As a result, the link between antibiotic pollution and superbugs is circumstantial, he acknowledges.

Larsson counters that the connection between industrial antibiotic pollution and microbial resistance is already well established. For example, in June 2015, he coauthored a paper in the Journal of Antimicrobial Chemotherapy that described resistance to antibiotics in bacteria collected from two Indian lakes suffering from fluoroquinolone pollution (DOI: 10.1093/jac/dkv167). The team also showed how this resistance could be transferred to bacteria that cause diseases. “But to what extent environmental pollution contributes to resistance in the clinic is and will be difficult to assess,” Larsson says. “That uncertainty should however not be used as an argument for taking no action.”

At Waxman Strategies, Hurowitz says that enough is known about antibiotic pollution to act on it. Manufacturers, he argues, can be made to contain their antibiotic emissions without new regulations, Hurowitz contends. In recent months, he and colleagues have held meetings with numerous drug retailers and purchasers of bulk antibiotics and encountered a range of reactions. “Some companies were responsive, and others weren’t, but big companies want to preserve their good name,” he says.

National drugstore chains are particularly sensitive to being connected to the rise of antimicrobial resistance, Hurowitz notes. The Changing Markets report noted that some big U.S. retailers were sourcing from Indian producers suspected of dumping antibiotic waste in the environment. “We are working with Walgreens and CVS to help them make sure their supply chain is clean,” Hurowitz says. “They don’t want to be associated with this controversy.”

Hurowitz notes that nongovernmental organizations were previously successful in alerting the public in Western countries to unsustainable practices in the palm oil industry—an issue to which people have fewer emotional ties than their health. Nowadays, major firms, including McDonald’s and Unilever, source their palm oil only from producers that do not harm tropical rain forests.

At DSM Sinochem, Rotthier notes that more and more actors are becoming aware of the need to source antibiotics responsibly. For instance, public health agencies in Germany and the U.K. are looking at including environmental criteria in their drug sourcing activities. Sweden meanwhile is lobbying the EU to change pharmaceutical manufacturing regulations in order to forbid antibiotic dumping by manufacturers. These actions are a far cry from a few years ago when few were even aware of the problem. “It’s recognized as a very important issue,” Rotthier says.