How chemistry programs are moving beyond small molecules 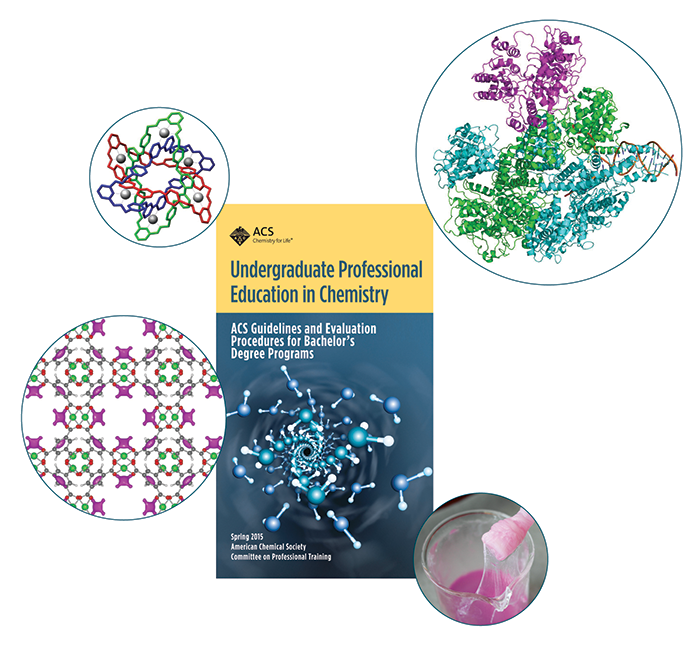 “I left college with the understanding that chemistry was on the scale of gold atoms and molecules like acetone and benzene,” says Ron W. Darbeau, dean of the College of Science, Technology, Engineering & Mathematics at the University of Arkansas, Fort Smith (UAFS). Darbeau is also a member of the American Chemical Society’s Committee on Professional Training (CPT). “There’s a wealth of chemistry outside that very narrow scale range.”

CPT, which creates guidelines for undergraduate chemistry programs, is trying to ensure that students are exposed to that wealth of chemistry. Approved undergraduate programs must now include some instruction on the preparation, characterization, and physical properties of macromolecular, supramolecular, mesoscale, and nanoscale systems.

The new requirement is part of the guidelines under which CPT approves undergraduate programs. Approved programs in turn grant ACS-certified bachelor’s degrees to students who complete coursework that satisfies the requirements.

CPT periodically revisits and updates the undergraduate guidelines. In the previous revision, in 2008, CPT drastically revamped the guidelines to make them less prescriptive and to give programs flexibility in implementing them. The most recent update, released in 2015, retained the flexibility of the 2008 guidelines but also added one curricular requirement that could be viewed as prescriptive, namely the inclusion of material on systems beyond traditional small-molecule chemistry.

Beginning in fall 2016, CPT has started reviewing programs under the 2015 guidelines.

Programs have flexibility in how they choose to meet the requirement. They need to include only two of four categories—synthetic polymers, biomacromolecules, supramolecular aggregates, and meso- or nanoscale materials. They can choose to meet the requirement through a dedicated course or by distributing the material across multiple courses. For the distributed option, the total time for a given category must constitute at least a quarter of a standard semester.

We wouldn’t want a kid to leave without organic or biochem. In the same way, we can’t have a kid leave without understanding that chemistry happens at various scales.
Ron W. Darbeau, CPT member and dean of the College of Science, Technology, Engineering & Mathematics at the University of Arkansas, Fort Smith

“If somebody did a discrete class, you’d know you’d be getting more coverage than in a distributed model,” says Thomas J. Wenzel, chair of CPT and a chemistry professor at Bates College. But adding a required class reduces student flexibility, he notes. “One of the wonderful aspects of these large systems is that they’re highly interdisciplinary. The idea that you can build coverage of them into every other course in the curriculum is actually a more realistic model.”

And some departments have external constraints that make adding another course difficult, if not impossible. For example, at the University of Northern Colorado, says chemistry professor and CPT member Richard W. Schwenz, the state legislature mandates that all bachelor’s degrees be able to be completed in 120 credit hours and four years. Plus, the university caps the number of credit hours in a major. The department-required classes have credit totals that are already close to the mandated cap, Schwenz says. “There’s really no place to add an extra course, so we were always looking at a distributed option.”

When the faculty at Northern Colorado tallied up their coverage, they found they were already very close to meeting the requirements for a distributed option. They include relevant material across their curriculum, including in their biochemistry and analytical, inorganic, organic, and physical chemistry courses.

Other schools have stand-alone courses already on the books. Ronald Brisbois, a CPT member and chemistry professor at Macalester College, taught a course on supramolecular chemistry in 2003 and 2009, long before the new requirement was even proposed. In 2015, knowing that the requirement was coming, he taught a class that covered supramolecular chemistry and synthetic polymers. The department is considering alternating one of these courses with advanced organic chemistry to meet the requirement. But the department is also counting its coverage in other classes to see whether it can meet the requirement without making students take the stand-alone course.

Similarly, the State University of New York, New Paltz, is offering a polymer course for the second time starting this month. The course, which is being taught by Laura Kosbar, a polymer chemist at IBM and a CPT member, was first taught two years ago.

For now, the course helps the department satisfy the new requirement. But over the long haul, the department will probably take a distributed approach, says department chair Pamela St. John. “We tend not to hire adjuncts for our upper-level courses,” St. John says. Kosbar “is a bit of an anomaly in our department.”

The department is currently recruiting an inorganic chemist. If the person hired has a background in materials science, it’s possible that person could teach an appropriate course as an elective.

And some schools plan to offer both a stand-alone course and a distributed option. UAFS, Darbeau’s university, does not yet have—but is in the process of seeking—ACS approval for its chemistry program.

“This requirement comes at a perfect time, because we are in the process of reinventing ourselves,” Darbeau says. The department plans to incorporate information about polymers and nanochemistry as early as general chemistry and incorporate them in more advanced courses such as organic, analytical, and physical chemistry.

But in addition to that distributed approach, the department is also developing a stand-alone class that will focus on—for lack of a better term—the “chemistry of scale,” Darbeau says. That way, students will have been exposed to the concepts throughout the curriculum, and the new course, which he expects will have physical chemistry as a prerequisite, will “sew everything together.” Another reason UAFS is taking a hybrid approach is that the school gets a lot of transfer students. It’s difficult to know which requirements these students met at their previous institutions, Darbeau says. “It’s important to have multiple touch points so you capture them at various points in the curriculum.”

UAFS is not the only school revamping its curriculum. “Our department is doing a curricular overhaul, partially in response to the new guidelines,” says Michael Wentzel, a professor at Augsburg College. The chemistry department is taking the labs associated with the five foundation courses and reorganizing them into three interdisciplinary labs that are independent of specific courses.

The department expects to meet the requirement mainly through those revamped lab courses. In addition, Wentzel collaborates with Jane Wissinger at the National Science Foundation Center for Sustainable Polymers at the nearby University of Minnesota, Twin Cities, to develop educational polymer labs. He expects to do more of that.

But Wentzel doesn’t rule out some sort of hybrid approach where the department combines the distributed and stand-alone options. “As we’ve streamlined our program with these upper-level interdisciplinary labs, there’s more room for us to teach a course on polymers or nanomaterials,” he says. One such course on polymers is already in the catalogue, and he hopes to offer it in the near future.

Some schools don’t have to worry immediately about the new requirement because they slid under the wire and were recently approved under the previous CPT guidelines. “We just finished our periodic report and were reapproved for another six years,” says Pat Owens, chair of the chemistry department at Winthrop University. “We were in the last group under the 2008 guidelines.”

But Winthrop is already thinking ahead to its next periodic report. “We thought we were going to have to add a course to meet the requirement. As we went through all the things we do, we came to the conclusion that we’re already meeting it across a series of courses.” Winthrop’s chemistry department is especially strong on mesoscale and nanoscale materials in its inorganic and physical chemistry courses and labs. In addition, at least a month in the biochemistry class is devoted to physical characterization and behavior of nucleic acids and protein. “Our entire biochemistry laboratory course could be described as an exercise in the preparation, purification, and characterization of polypeptides and polysaccharides,” Owens says.

CPT just started reviewing programs under the new guidelines at its fall 2016 meeting. For those reviews, the members are checking out syllabi and other course materials to make sure the topics are actually being covered. The committee hopes that programs will pay more than lip-service to topics. “We certainly would like to see these things assessed,” Schwenz says. “We’d like to see them show up on syllabi and exams, as appropriate.” Programs that don’t meet the requirement will have until their next periodic review to comply or risk losing CPT approval.

But the main goal for CPT and the departments it approves is making sure students are ready for graduate school or the workforce.

“If we’re about preparing students adequately, we realize there’s a shortfall,” Darbeau says. “We wouldn’t want a kid to leave without organic or biochem. In the same way, we can’t have a kid leave without understanding that chemistry happens at various scales, and the behaviors are not readily interpolated or extrapolated” from small-molecule behavior.

Comment
Preparing for professional training in the time of a pandemic
Education
Oklahoma Revamps Chemistry Graduate Program
Environment
Revised Undergraduate Guidelines
Share X
To send an e-mail to multiple recipients, separate e-mail addresses with a comma, semicolon, or both.
Title: How chemistry programs are moving beyond small molecules
Author: Celia Henry Arnaud
Chemical & Engineering News will not share your email address with any other person or company.

Comments
Robert E Buntrock (January 26, 2017 4:09 PM)
The beyond small molecules movement is advancing even in pre-collegiate education. My grandson, a high school sophomore, is taking pre-AP Biology and they've already had some chemistry including polymers and bio-polymers.
Reply »