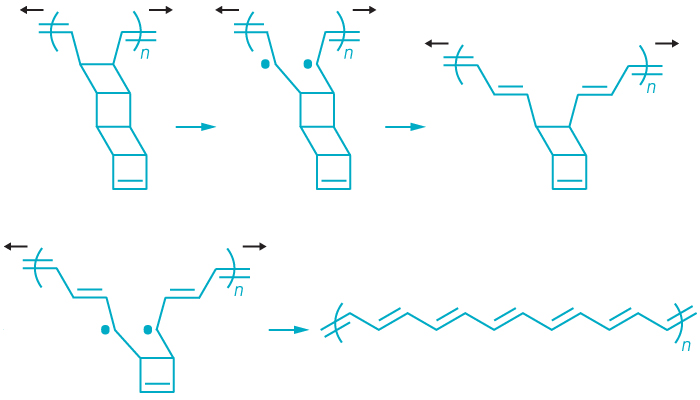 Using mechanical force, rather than light or heat, to transform molecules from one form to another has gained traction in the past decade, creating the field of polymer mechanochemistry. Stanford University chemists have made a polymer that transforms from a nonconducting form to a semiconducting one in response to mechanical force. One day, such a material could find use in mimicking the sense of touch or hearing, in which a mechanical force is converted into an electrical signal.

Yan Xia’s group spent two years trying to design the polymer without success. One day Xia was chatting with his Stanford colleague Noah Z. Burns, when Burns showed him the ladderane lipids his group had been synthesizing. The two realized these ladder-like fused cyclobutanes would be a great motif for the polymer Xia envisioned. When subjected to mechanical force, they imagined that the σ bonds in the cyclobutanes would unzip to form continuous π bonds as in polyacetylene (shown). Their colleague Todd J. Martinez joined the collaboration to study the mechanism of this transformation via computer modeling.

When sonicated in solution—a common technique for applying mechanical force—the polyladderene structure they made goes from colorless to blue in a matter of seconds. With longer sonication, the material darkens and transforms into an insoluble mesh of semiconducting nanowires (Science 2017, DOI: 10.1126/science.aan2797). The polymer could be used, for example, to report on physical stresses in a material.

“It’s a creative work of mechanochemical beauty,” comments Jeffrey S. Moore, a mechanochemistry pioneer at the University of Illinois, Urbana-Champaign. “I wish we’d have thought of this ourselves.”

Next, the chemists hope to create simpler structures that accomplish the same task. The polyladderene synthesis currently yields decent amounts, Burns says. “But if we ever wanted to do commercial applications, our synthesis, as it stands, would not be viable,” he says. “So we are actively making simpler monomers that take less steps to get to.”

Polymers
Polyhydroxyalkanoates made diastereoselectively
Materials
Diarylethene molecular switch has staying power
Materials
Polymers That Heal Themselves
Share X
To send an e-mail to multiple recipients, separate e-mail addresses with a comma, semicolon, or both.
Title: Polyladderenes unzip to form semiconducting polymers
Author: Bethany Halford
Chemical & Engineering News will not share your email address with any other person or company.

Luciano D'Agostino (August 10, 2017 3:16 AM)
What do you believe of a naturally occurring system of polyamines and phosphates self-assembling around the DNA double helices, as a possible semiconducting polymer that can play, in my opinion, important tasks in DNA physiology?
http://www.sciencedirect.com/science/article/pii/S0167488912001668
This could be an interesting field of investigation for expert researchers like Authors.
Reply »