What are pool chemicals, and how do they protect swimmers?

Chlorine kills microbes in pools, but don’t blame it for your green hair 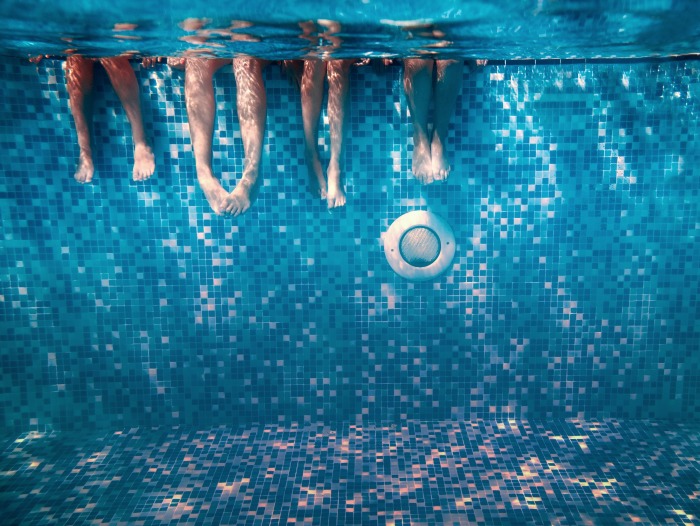 People love to complain about chlorine in pools—often as much as they enjoy plunging into the clean water. Chlorine-based compounds can dry out skin, turn eyes red, and produce the familiar and pungent pool smell.

On the other hand, thanks to chlorine, we can swim in water free of microbes, such as Escherichia coli, that can cause digestive troubles. In addition to disinfectants such as chlorine, pool operators also add chemicals to control the pH, alkalinity, and hardness of the water.

The chlorine used to disinfect pools is rarely present as elemental chlorine (Cl2). It’s typically added as part of more complex molecules such as hydrogen- and oxygen-containing hypochlorites or carbon-, nitrogen-, and oxygen-containing isocyanurates, explains Thomas M. Lachocki, chief executive officer of the National Swimming Pool Foundation. When these compounds are added to water, they spontaneously form hypochlorous acid, which is the disinfecting agent commonly called free chlorine in pool lingo.

Residential pool owners are most likely to use a form of chlorine best known as trichlor or trichloro-S-triazinetrione because it dissolves slowly, has high chlorine content, and is easy to use, Lachocki says. Getting the concentration of the disinfectant right is a balancing act. The concentration needs to be high enough that some disinfectant is always in the water. But it also needs to be low enough to be comfortable for swimmers. Adding a stabilizer such as cyanuric acid helps protect the hypochlorous acid from degrading in sunlight.

Chlorinated compounds aren’t the only options for first-line disinfectants. Bromine-containing compounds that generate hypobromous acid can also be used to kill pathogens. But they’re used in hot tubs more often than in swimming pools because bromine is more stable than chlorine at the high temperatures used in hot tubs.

Newer pool hygiene systems take extra steps to kill chlorine-resistant microbes that can cause intestinal infections. Some recreational facilities treat for Cryptosporidium, which has a protective coat that makes the microbe hard to destroy with chlorine, says Blake Stark, general manager of water treatment chemicals and filtration media at NSF International, a standard-setting and certification organization.

For such purposes, ultraviolet radiation in the filtration system has become popular. Although it’s particularly good for inactivating Cryptosporidium, UV doesn’t make a good stand-alone disinfectant, Lachocki says. “It doesn’t maintain a residual in the water and only inactivates and oxidizes in the UV chamber,” he says. That means that microbes brought into the water by swimmers aren’t effectively killed if UV is the only method used.

But UV water treatment has another benefit: It can prevent that potent “chlorine” smell associated with indoor pools. Swimmers are partly to blame for the stink. That odor is created when chlorine reacts with compounds in urine and sweat to form trichloramine. UV light can degrade these compounds. In addition to causing pool smell, trichloramine and other disinfection by-products may be linked to asthma in swimmers.

Pool disinfectants work optimally when the water pH is between 7.2 and 7.8. So pool operators must add another class of compounds to maintain this pH range and push the equilibrium between hypochlorous acid and hypochlorite ions toward the acid, which is a better disinfectant, Lachocki says. Typical chemicals used include muriatic acid (an archaic name for hydrochloric acid), sodium bisulfate, carbon dioxide, sulfuric acid, and sodium carbonate. Sodium bicarbonate also works, but it has a greater effect on the total alkalinity of the water than it does on the pH.

And all these pool chemicals are big business. According to Pkdata, a market research firm that collects data on the swimming pool and spa industry, there are more than 8.5 million residential pools—in ground and aboveground—in the U.S., not including Alaska and Hawaii. More than 719 billion L of water get treated to fill those pools. As a result, the market for the chemicals used in that treatment is roughly $2 billion.

Pool chemistry certainly produces a lot of greenbacks, and sometimes even a green pool. When the diving pool at the 2016 Summer Olympics in Rio de Janeiro turned a shade of emerald, it was possibly because of algae growth or an excess of a copper-containing algicide. The actual culprit will never be known conclusively because Olympic officials drained and refilled the pool without running chemical tests.

On occasion, pool chemistry is also to blame for a bit of green hair. Urban myths would have you believe that chlorine causes unwelcome green highlights. But the change of hue is thanks to copper-containing algicides added to water or copper found in the water used to fill the pool. Sometimes the copper even originates from corroded plumbing. It’s like the green patina that appears on copper-plated buildings, except it’s on your head.

Thankfully, if folks follow directions on pool chemical labels—which are regulated in the U.S. by the Environmental Protection Agency—these debacles can usually be avoided. Or it may be time to get your water tested for copper.

Update: This article was modified on Aug. 1 to refresh its information and data.

Water
How extreme bacteria squeeze water from a stone
Water
超高效的海水淡化
Water
How peracetic acid is changing wastewater treatment
Share X
To send an e-mail to multiple recipients, separate e-mail addresses with a comma, semicolon, or both.
Title: What are pool chemicals, and how do they protect swimmers?
Author: Celia Henry Arnaud
Chemical & Engineering News will not share your email address with any other person or company.

Comments
Robert T. Burrows (August 3, 2017 8:19 AM)
Greetings! Just to set the record straight, both cryptosporidium and chloramines are readily handled by maintenance of a high level of ORP (Oxidation Reduction Potential). Approximately 850 mV at + or - 3 PPM Free Chlorine has been proven to inactivate cryptosporidium in 30 minutes or less in the pool. In fact, the DOH of NSW Australia employs this standard as one method of treatment for a loose stool fecal acciddent. Consistent maintenance of the same ORP level will prohibit chloramine development and provide for a healthy IAQ (Indoor Air Quality) within even the busiest Natatorium. This truth was first released at the NSPF World Aquatic Health Conference in 2005 (see www.sureh2o.com/conference). Although it has not been formally studied since, multiple field studies by Aquatic Practitioners have demonstrated the same results lending credible proof to this result. In conclusion, UV, a supplemental sanitation system will provide a secondary level of protection against cryptosporidium and chloramines. The notion held by the industry that chlorine is incapable of handling these concerns is a matter for additional focused research and subsequent product exploration. Thank you.
Reply »

Daniel CROS (August 8, 2017 3:43 PM)
Hello ! As a piece of information, there are some other disinfection alternatives for pool treatment than strong oxidizers aggressing swimmers' cells the same way they kill microorganisms cells. These alternative treatments are not so promoted as they need some more technical follow-up and a different way of considering water treatment. For instance, they need a better monitoring of the water treatment with the just necessary products and their adapted concentration to prevent problems (haze, algae growth...) rather than using useless high concentrations (or shock operation) to solve problems. One of these confidential pool treatments is based on PHMB, an acronym hiding a complex chemical name (PolyHexaMethylene Biguanide, hydrochloride) found under the generic name of "Biguanide".
When correctly used, this product gives swimmers the feeling to be in a "soft water": no more aggression of eyes, skin or else... which is normal as it is not an oxidizer. This is even more noticed by contact lens users, who can quite open eyes in water without having this unpleasant feeling to have sand under their eyelids!
On a more chemical level, this product is in fact an organic oligomer: a mixture of low size polymers, completely soluble in water due to its cationic (hydrochloride) form. As shown by its molecular structure (CAS 32289-58-0) this oligomer is a sequence of C6 aliphatic chain groups which alpha carbon is linked to a biguanide group. This structure also has slight foaming properties, which is not a problem in pool treatment: this shows the swimmers that water is correctly treated (foam disappears after few seconds), the same way chlorine by-products smell in chlorinated pools. The same way as for chlorinated pools, UV devices can be used with Biguanide-based products. As well, in case of algae problem, Hydrogen Peroxide (H2O2) products can be used as well. It must be noted that Biguanide measurement remains possible after an H2O2 treatment, contrary to halogen-based oxidizers needing several days to recover the measure. Last, there is another important difference between oxidizers and Biguanide : their remanence. Oxidizers are consumed whatever the pool uses. This is the reason why chlorine must be constantly brought to water even in the absence of swimmers. And more, as oxidizers are consumed by sunlight (UV), the first 10 centimeters of the water surface are more poorly treated, while it is the zone where swimmersâ€™ face (nose, mouth) is more likely to be. Biguanide is stable to UV light and high temperatures so its concentration has more chance to be homogeneous in the whole pool volume, including the surface.
Finally, the most complicated with the Biguanide is to find a professional of very good advice to make the best use possible... and enjoy a good swimming all season.
Reply »