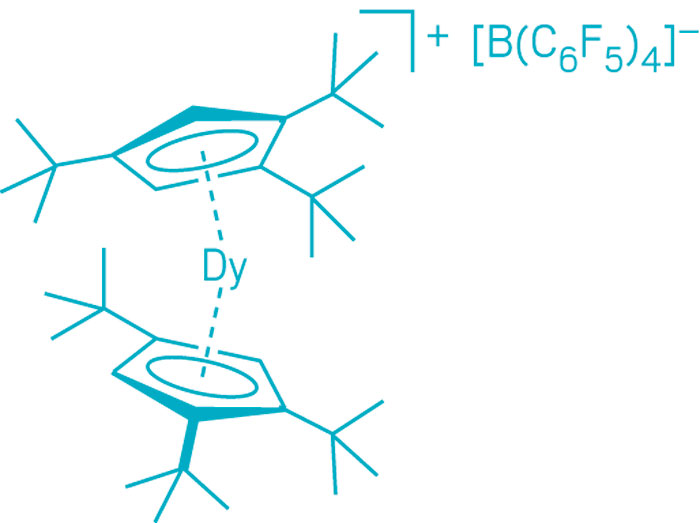 The quest to develop smaller and more energy-efficient smartphones and supercomputers with more features and processing power hinges on increasing data storage capacity. Two research groups at the University of Manchester have reported a dysprosium molecule with switchable magnetic properties—a single-molecule magnet (SMM) with the ability to store a single bit of data—that exhibits the most promise yet for reaching what might be the ultimate limit in high-density data storage.

The catch with SMMs is their memory effect works only under the influence of a magnetic field at very low temperatures, up to 14 K so far, using liquid helium as a coolant. The new dysprosium molecule displays magnetic switchability up to 60 K, which is tantalizingly close to 77 K, liquid nitrogen’s temperature. Researchers who study lanthanide complexes tell C&EN this breakthrough could allow them to design even better molecules going forward that could operate at 77 K or higher, which would make SMMs commercially practical for data servers. Such an achievement, they add, would be equivalent to the development of the first high-temperature superconductors operating at liquid nitrogen temperatures reported in the 1980s.

Dysprosium exhibits one of the highest magnet moments of any element. It’s typically used as an additive in neodymium-based permanent magnets to improve thermal performance. The Manchester researchers prepared the new complex by sandwiching a dysprosium(III) cation between two cyclopentadienyl anions, each bearing three tert-butyl substituents, and crystallizing the complex as a borate salt.

To maintain the magnetic properties at higher temperature requires carefully designing molecules to control the symmetry of the lanthanide metal and its ligands, the researchers explain. The symmetry affects the spatial distribution of the ligand electrons with respect to the metal ion’s electrons. In the case of dysprosium, an axial disposition of the ligands is favored over an equatorial arrangement. The cyclopentadienyl ligands achieve this distribution, but similar, more highly coordinated complexes have been made before.

What makes the new complex special, as Mills, Chilton, and coworkers explain, is exclusive binding of cyclopentadienyl ligands to dysprosium and the coupling of the dysprosium ion’s magnetic moment with vibrations of the atoms within the complex, such as the C–H bonds of the tert-butyl groups. They find that the rigidity of the cyclopentadienyl ligands restricts the available molecular vibrations, leading to the enhanced magnetic effect.

“These results represent an astounding leap forward from the previous temperature record and set the stage for realizing a magnetic memory effect at even higher temperatures through manipulation of the ligand field of low-coordinate lanthanide ions,” says SMM researcher Jeffrey R. Long of the University of California, Berkeley. “It is indeed a spectacular result for the field of molecular magnetism.”

“It really is a stunning result,” says fellow Manchester f-element chemist Stephen T. Liddle, who was not involved in the research. “This discovery is going to redefine the whole area of single-molecule magnetism, not only because it’s not far from operating at liquid nitrogen temperature, but the Mills and Chilton study unveils a new concept for what it takes for the system to be so good.”

Molecular data storage using SMMs could handle about 30 terabits of data per square centimeter, or more than 25,000 GB of information on a device the size of a flash drive, the Manchester researchers note. That greatly exceeds the 256-GB data storage of today’s basic flash drives or Apple’s latest iPhone 7 that rely on magnetic nanoparticles.

The publication of the new research in two papers in different journals by two research groups from the same university has left chemists following SMM chemistry scratching their heads. The researchers say they are not permitted by the university to comment on that situation. Richard Winpenny, head of Manchester’s School of Chemistry and an SMM researcher, also could not discuss the situation. Winpenny referred C&EN to the university’s press office, which responded by stating that the university is investigating the irregularity and has no comment at this time.

Tomachi (March 3, 2018 9:37 PM)
That 25 GB/cm2 is only a square 2D measurement! Assuming this single molecule layer of delicious goodness needs say 14 nanometers each (that's the chip fabrication size of the latest NVidia 1070 GPU)... and you need 10 layers of that crystal inbetween each of these layers thats about 1e+7 / 140 = 71429 layers which would yield *25 = 71.4 TB per cubic centimetre at a very conservative old-school chip making way of thinking!! Very nice!!
Reply »