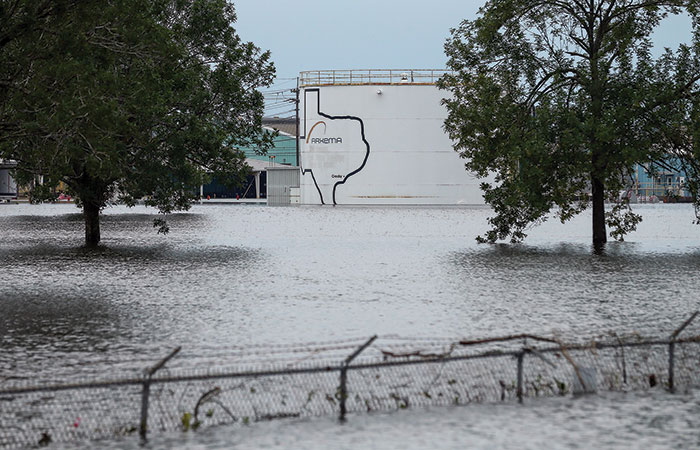 As flood waters continue to rise, Storage facilities holding highly flammable organic peroxides at an Arkema plant in Crosby, Texas, began to explode early this morning, sending black smoke into the air. The facility and area around it had been evacuated and no serious injuries were reported. However, several first responders were treated for symptoms of respiratory irritation.

The explosion was another setback for the storm-ravaged region of the Texas Gulf coast. By Aug. 30, Houston residents finally caught a glimpse of sunlight after nearly five days of record-breaking rain from Tropical Storm Harvey. But dangers still lurk in areas that remain underwater, as the Crosby explosion shows.

Tens of thousands of people in the Houston area have moved from their flooded homes to shelters. As the water recedes, state and federal officials, as well as refinery and chemical plant managers, will assess the damage.

Many refineries and petrochemical facilities closed in advance of the storm, with workers following procedures for unplanned shutdowns. However, Arkema executives reported an imminent threat of explosions and fires from degraded organic peroxides starting on Aug. 29. The facility was plagued with heavy flooding and power outages after it was shut down.

The Arkema site manufactures polymer additives for plastic resins, polystyrene, polyethylene, polypropylene, and acrylic resins. The company has not specified what chemicals are stored at the site, or the amounts.

Arkema evacuated its employees from the plant. About 300 residents living within a 2.5 km radius of the site, which is in a rural area, voluntarily evacuated. The company is working with public officials, who have determined that “the best course of action is to let the fire burn itself out,” according to an Arkema statement.

Safe storage of the organic peroxides requires refrigeration. At Arkema they are normally kept in cold-storage warehouses, but after electric service and backup generators both failed, the chemicals were transferred to refrigerated trailers with diesel generators. An undisclosed number of those trailers have also lost power and some cannot be remotely monitored, according to Rich Rowe. chief executive officer of Arkema’s North American operation.

In a call on Aug. 30 prior to the explosion, Rowe said flood waters at the plant site reached 1.8 meters above the ground and were still rising. He added it could take three to six days for the water to subside.

Harvey first made landfall near Corpus Christi as a category 4 hurricane late on Aug. 25 before moving east, soaking the Houston area with as much as 132 cm of rain. Five days later it picked up more water from the Gulf of Mexico and headed to Louisiana.

The Gulf Coast is home to 25% of U.S. refinery capacity and more than half the country’s production of a number of downstream chemicals. Many of those plants were taken off-line due to the storm. The two largest refineries in the country – Saudi Aramco in Port Arthur and Exxon Mobil in Baytown were shut down. Chevron, Royal Dutch Shell, Valero Energy, Citgo Petroleum, and Flint Hills Resources also shut refineries, including some with on-site chemical units.

Closures affected a wide swath of the Gulf’s basic and intermediate chemical plants from Corpus Christi to the Louisiana border. Dow Chemical, Ineos, Invista, Ascend Performance Materials, Oxychem, and Formosa Plastics were among those reporting site shutdowns. LyondellBasell and Huntsman each shut down six sites. As the week wore on, Covestro, Linde, and TPC group also reported taking plants off-line.

“Our primary concern at this time is for the safety and well-being of our employees, their families and our plant communities,” said Anne M. Knisely, Huntsman’s director of communications.

As Harvey’s rains move in on Louisiana, the number of outages could grow, says Kevin W. McCarthy, analyst at Vertical Research Partners, an equities research firm. But already, “the combination of Harvey’s path, duration and rainfall total is wreaking havoc with the supply side of the U.S. chemicals industry on an unprecedented scale,” he says.

While shutting down a refinery or chemical plant is a safe move in the face of a massive storm, it is not without side effects. Even when plant operators receive a few days warning, unplanned shutdowns lead facilities to emit volatile chemicals in amounts that far exceed air pollution permit levels. During unplanned shut down activities, emissions control equipment is not fully functional. In some cases, flaring is used to reduce the amount of hazardous chemicals that go into the air.

Filings with the Texas Commission on Environmental Quality (TCEQ) show massive, but temporary, emissions of such hazardous chemicals as benzene, butadiene, nitrogen oxides, and miscellaneous volatile organic compounds. At the giant Exxon Mobil complex in Baytown, an estimated 100,000 kg of sulfur dioxide was released over the course of five days.

Exxon Mobil also reported additional air releases at its Baytown and Beaumont complexes due to damage to outdoor storage tanks, as did Shell Oil at its Deer Park facility.

“The contaminants each pose acute health threats as well as more chronic health effects,” says Miriam Rotkin-Ellman, a senior scientist for health at the Natural Resources Defense Council, an environmental advocacy group. “The expectation is that there will be bursts of emissions. How long, intense, and frequent they will be is hard to predict.”

The priority is to secure facilities to prevent explosions and major releases, Rotkin-Ellman says. But residents who took shelter near the plants could experience respiratory or neurological effects. Most vulnerable are people who have lung conditions like asthma or chronic obstructive pulmonary disease, she points out. In particular, sulfur-containing emissions can cause respiratory irritation at very low levels.

It may be difficult to track the amount and types of air emissions after Aug. 28. At the behest of TCEQ, Governor Greg Abbot (R) lifted requirements for facilities to report emissions beyond permit levels if those releases are a result of disaster response efforts.

“It’s just a big mess right now,” says Andrew Keese, spokesperson for TCEQ. He says 24 state-operated air quality monitors in the Houston area were taken off line before the storm to prevent damage and won’t be turned back on until conditions are safe.

Also before the storm, TCEQ worked with EPA officials to secure a number of Superfund sites in the Houston area by removing hazardous waste-containing drums and shutting down systems.

The storm’s impact on local residents will be long lasting. In contrast, the chemical industry’s recovery is likely to be faster, according to Vertical’s McCarthy. It will be some weeks before plants come back online, but he does not anticipate that shortages will significantly impact the supply chain.

In the short-term, McCarthy estimate that over half of the U.S. ethylene and polyethylene capacity has been shut down and along with 40% of chlor-alkali and polyvinyl chloride. Supply interruptions could cause short term price spikes, he predicts. In addition, industrial gas and catalyst suppliers will see weakened demand until their customers’ operations pick up again.

“This too shall pass – don’t mess with Texas!” McCarthy wrote in a note to investors. “As disruptive as it is, even Hurricane Harvey will prove to be a transitory event as it relates to chemical stocks.”

Comments
Barbara Ameer (August 31, 2017 2:02 PM)
What happened at a chemical plant in Crosby, Texas, amid a week of epic rainfall and unprecedented flooding produced by Hurricane Harvey, was damaging to more than property and health of people in the immediate vicinity.

The information presented to the public makes it appear that there was management decision not to proactively neutralize the potentially combustible organic peroxides. This scenario put chemistry on the front page in the worst possible light. It sent the message that proactively protecting human life was overshadowed by projected loss of chemical revenue, in the minds of decision makers in the chemical sector. This tragedy is compounded since it ripples down to the image of chemistry in our communities and educational institutions.

Can the American Chemical Society counteract this bad press? ACS section members are the face of chemistry in their respective communities. Year after year these scientists do phenomenal work, which gets relatively little public recognition. Now is the time for National ACS to prioritize publicizing local efforts to show the world that chemistry is an interdisciplinary science that helps solve real world problems.

Let’s all make “Chemistry for Life” - the National ACS tagline – a reality in our communities by supporting division and local section volunteers and communicating the value we collectively provide to society.

James Mayer (August 31, 2017 2:43 PM)
It's terrible that the response by government is that companies don't have to report. Given them more time to report, allow greater uncertainty, and provide support for the companies, absolutely. But collect the data! It's critical to know what is really happening so that we can make informed decisions about future regulations or lack thereof. Would we tell airlines that they can avoid reporting near misses because of a storm?
Reply »

Melody Bomgardner (September 1, 2017 3:37 PM)
Hi James,
Though companies have not been required to disclose emissions that happen during their disaster response activities, I see that some locations continue to file with TCEQ. They're posted here: http://www2.tceq.texas.gov/oce/eer/ Scroll down to "Search by date" and put in the dates you want and selection Region: 12 Houston to see the most recent list.
Reply »